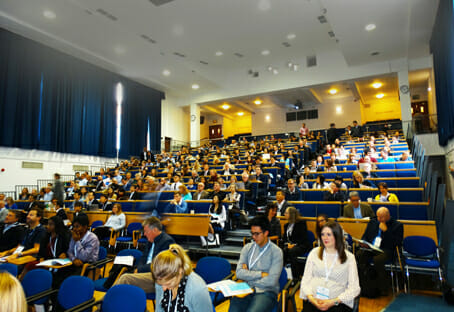 There was a strong focus on the visual environment, outdoor time and early intervention at the 16th International Myopia Conference in Birmingham, United Kingdom.

Over 350 myopia researchers from more than a dozen countries converged on drizzly, chilly Birmingham for the sixteenth International Myopia Conference (IMC) in September, where the latest research was presented in 45 lectures and more than 150 scientific posters over four days. The session topics covered prevalence, progression and risk factors of myopia, mechanisms such as light exposure and visual pathways, optical and pharmacological methods of myopia control, genetics, clinical trial considerations, myopic eye shape and accommodation and binocularity.

The conference opened with the senior keynote award lecture presented by Professor Christine Wildsoet, an Australian trained optometrist who now runs the Myopia Research Group at the University of California at Berkeley, USA. Professor Wildsoet’s human and animal-model research examines visual environment influences on eye growth, local ocular signalling pathways, interventions and mechanisms of myopic eye diseases. She told a wonderful scientific tale of the journey from chicken studies to human interventions by always asking the next question why, and encouraged young scientists to look closely and seek the new story hidden in the data.

There was a strong focus on the visual environment, outdoor time and early intervention at this year’s conference. Professor Ian Morgan from the Australian National University, Canberra, presented data showing incidence of childhood myopia across the world stratified by education demand – the lowest rates are in countries with no or limited formal education, with increasing rates in countries with modern Western education. The greatest rates are in East Asian countries which consistently outperform the rest of the world academically.

Professor Morgan called for changes to school organisation and curriculum to “stop schools from continuing to generate high levels of myopia”. Associate Professor Scott Read from QUT in Brisbane confirmed the need, presenting objective data collected using the Actiwatch device, which measures physical activity and light exposure. Australian children (age 10-12 years) spent an average 105 minutes per day outdoors, while children aged eight to 12 years in Singapore spent only 61 minutes outdoors per day. Interestingly, there was a difference between light exposure time in myopic and non-myopic Australian children, but not so in Singaporean kids, where the high prevalence of myopia and myopigenic environment shows the complexity of this influence. Echoing Prof. Morgan’s call for school based interventions, Prof. Read found the major difference between Australian and Singaporean children’s light exposure time was during school hours – outside of school hours, the light exposure time was not significantly different.

Associate Professor Pei-Chang Wu presented the results of the ‘Recess Outside Classroom’ (ROC) school based intervention program, which involved over 700 grade one (age six to seven) children across 16 schools in Taiwan for a year. The ROC intervention group attained around 80 minutes per day more outdoor time than the control group, which showed for the first time that time spent outdoors has a benefit to slow progression in myopic children, and not just delay or reduce the risk of myopia onset. For myopic children, the intervention showed around a 30 per cent myopia control (reduction in axial elongation) effect. Although not as clinically significant as optical or pharmacological interventions, time spent outdoors can be reasonably recommended to all myopic children as an adjuvant treatment for myopia management.1

What About Sun Protection?

In Australia, we’ve been told for decades to slip, slop, slap, slide on sunglasses and seek the shade. Could this interfere with the efficacy of time spent outdoors? The mechanism of outdoor time benefit is currently unknown – it could be due to the brightness of the light stimulating retinal dopamine, which is a potent stop signal for eye growth;2 and/or, it could be the effect of relaxing accommodation and having a more uniform dioptric demand across the retina.3

When investigating luminance of various outdoor and indoor conditions, Professor Seang-Mei Saw from Singapore equipped mannequin heads with light sensors set at the average height of a 10 year old boy (137cm, if you were wondering), and tested luminance in an open field, under a tree, with class two and class three sunglasses, and with a hat. This was compared to indoor luminance beside a large window and without a window. Open field luminance is about 18,000 lux, with indoors around 300-500 lux. If a child is wearing a hat and wrap-around sunglasses and is under a tree, around 1,000–2,000 lux is still achieved. Surprisingly, even sitting beside a large window does not provide this same level of brightness. Additionally, since the eye is also exposed to far more blue-violet light outdoors than indoors, the complexity of the role of UV and near-UV high energy visible light in eye growth raises an important research question for the future.

As the conference turned to optical and pharmacological methods for myopia control, Professor Carly Lam of Hong Kong Polytechnic University presented results of a novel ‘multi-segment myopic defocus’ (MSMD) spectacle lens for myopia control, which is composed of innumerable +3.50 lenslets, each less than a micron in diameter, with a central clear zone for distance correction of around 20mm. The space between the lenslets – which look almost like the compound eye of a fly – provides a 50/50 ratio between distance correction and +3.50 lenslet add power across the surface, similar to alternating soft contact lens designs like Coopervision MiSight4 or the defocus-induced soft contact (DISC) lens,5 which was developed by the same group, and provided around 50 per cent efficacy for myopia control with a wearing time of six hours or more. Improved compliance with spectacle wear brings a more consistent exposure to the MSMD defocus treatment, and over two years this novel spectacle lens achieved a 60 per cent reduction in axial elongation in eight to 12 year old children. There was a small drop in mesopic low contrast acuity and stereoacuity, but high contrast acuity was similar to single vision distance spectacles and the acceptance was similar to the DISC contact lens.

The presumed mechanism of these alternating and multi-segment defocus optical corrections is that creating an area of myopic defocus generates a stop signal to myopic eye growth, whereas hyperopic defocus – whether centrally induced due to accommodation or aberration errors, or peripherally due to relative peripheral hyperopia – potentiates eye growth.6,7 If a child accommodates accurately through a multifocal or alternating defocus soft contact lens, and doesn’t use the ‘add’ as a presbyope would, then this myopic defocus will be achieved. But with childhood myopia commonly accompanied by errors of accommodation like lag and near work-induced transient myopia,8-10 some children could be using the ‘add’ at near and hence suffering undesired hyperopic defocus from the distance portions of the contact lens while reading. Miguel Faria Ribeiro from University of Minho in Portugal modelled retinal image quality with dual focus lenses designed for myopia control, based on differing adds and diameters of the central distance zone. He found that larger central optic zones would likely lead to more accurate accommodation, allowing the ‘treatment’ add zones to generate myopic defocus. By contrast, smaller central optic zones may lend themselves to using the add to accommodate, leading to hyperopic defocus from the distance zones. This could influence the individual response to different lens types – children with poor accommodation could possibly lend themselves to a larger central optical zone lens, or OrthoK, than normal accommodators who will be more likely to use a small central optic multifocal or dual focus soft contact lens correctly. However, as a monocular model, once binocularity is introduced, it could become an altered picture – for example, a child with esophoria may relax their accommodation more to avoid diplopia, regardless of any effect of central optic zone size.

There were further sessions on genetics, animal models, visual simulations of varying optical corrections and even the effect of virtual reality (VR) googles on binocularity by Philip Turnbull of the University of Auckland. He found minimal effect of both indoor and outdoor simulated viewing conditions in young adults with normal binocular vision, and a small measurable increase in choroidal thickness after use which could be due to heat, or a mismatch created between vergence and accommodation systems by the headsets, which could possibly indicate a therapeutic benefit. Increased uptake of VR into the future highlights another intriguing vision research opportunity.

The mark of a successful scientific conference was that attendees left with minds full of new research questions to investigate in this endlessly fascinating field.

Kate Gifford BAppSc(Optom)Hons, GCOT, FBCLA, FIACLE, FCCLSA, FAAO operates an independent practice in Brisbane with special interests in contact lenses, binocular vision and myopia control. Graduating from Queensland University of Technology (QUT) in 2003 with First Class Honours and a University Medal, Kate is nearing completion of a part-time PhD by clinical research. She is a fellow of the BCLA, IACLE, CCLSA and AAO and an award-winning clinical supervisor and visiting lecturer at QUT. Ms. Gifford has authored 38 peer reviewed and professional publications, and has presented over 80 lectures at conferences in Australia and internationally.

The full story is available at mivision.com.au/Birmingham-myopia-conference