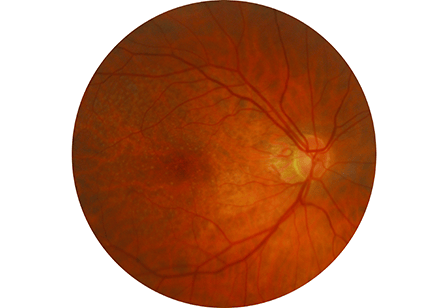 Age-related macular degeneration is the leading cause of irreversible blindness in Australia. With no known cures, the role of optometrists is imperative.

MM is a 56 year old female with blue eyes. She suffers from type II diabetes, and her retinal health is managed at the Ophthalmology Department at the Hospital with annual dilation and retinal photography.

MM is a high myope and has worn Menifocal Z contact lenses since age 47. She was able to achieve contact lens acuities of R & L 6/6 and N4 at near for many years.

In 2014 MM returned after two years, reporting blurry vision in the left eye. Vision with her contact lenses was R 6/7.5 and L 6/15. The lenses were three years old and heavily deposited. They were subsequently reordered.

Patients with AMD should be counseled about their diet

Upon delivery, the new lenses enabled contact lens acuities of R 6/6 and L 6/7.5. Macular drusen and pigmentary changes were noted, but MM reassured us that her ophthalmologist was managing her ocular health. She reported having an Amsler grid which she used ‘sometimes’. It was noted that MM was a heavy smoker and she was counseled about the detriment of smoking on her health including irreversible damage from age macular degeneration (AMD).

MM was advised to attend at least an annual review, however she did not return until three years later. When she did return, she reported blurry vision in her left eye, which she assumed was from the lens being three years old. Vision with her contact lenses was R 6/6= and L 6/24.

MM had had a mydriatic retinal exam at the hospital just four months prior, and she informed me that her ophthalmologist had no concerns at the time.

An examination revealed significant macular pigmentary changes with many hard and soft drusen in both eyes, and the presence of geographic atrophy in the left macula (Figure 1 and 2). Optical coherence tomography (OCT) revealed significant thinning in the retina (L>R) and decrease in the reflectivity of the retinal pigment epithelium (RPE) (Figure 3). The decrease in retinal thickness and reflectivity is a result of progressive atrophy of the RPE, consistent with AMD. Fortunately, there was no signs of any subretinal fluid or choroidal neovascularisation.

Further counseling regarding smoking, diet and lifestyle was given but I had the suspicion that my words landed on deaf ears… and I was correct.

MM’s lenses were replaced, and she returned for review one month later, smelling strongly of cigarette smoke.

Age related macular degeneration is the leading cause of irreversible blindness in Australia and the rest of the developed world. AMD is normally categorised into early AMD, which is characterised by pigmentary changes of the RPE and hard, small drusen; intermediate AMD where there is the presence of soft large drusen and/or geographic atrophy of the RPE but not affecting the fovea; and late AMD, which involves geographical atrophy with foveal involvement and/or choroidal neovascularisation.1

The major risk factor for AMD is age, with the prevalence of AMD increasing dramatically with age. Other nonmodifiable risk factors include positive family history, female gender, Caucasian background, and lighter iris colours.1

MM cannot change the fact that she is a Caucasian female with blue eyes, however there are modifiable risk factors for AMD, including smoking, diet and lifestyle.2-3

Smoking is the most significant modifiable risk factor contributing to AMD – it at least doubles the risk of developing the disease. The Blue Mountains Eye Study found current smoking to have a 3.6 times risk of developing geographic atrophy and a 2.5 times risk for any form of late AMD. Current smokers were found to develop late AMD at an earlier age compared to past smokers and those who never smoked. There did not appear to be a significant difference in incidence rates for late AMD between past smokers and those who never smoked. Hence, current smokers should be strongly encouraged to reduce smoking to reduce their risk of AMD progression.2-3

It is widely recognised that smoking is associated with systemic morbidities such as lung cancer, stroke and cardiovascular disease, however it is less well known that smoking can lead to blinding eye diseases. Downie and Keller surveyed Australian optometrists about their clinical management behaviours and found that less than half of those surveyed routinely questioned their patients about smoking, and less than two-thirds routinely counselled their patients regarding diet.5

Studies have shown that patients with diets rich in specific nutrients – in particular zeaxanthin and lutein and omega-3 essential fatty acids – are associated with a reduced risk of developing sight-threatening late-stage AMD.6 Common foods such as leafy green vegetables and oily fish are rich in some of these nutrients.

The Age-Related Eye Disease Study (AREDS) and AREDS2 found that high-dose supplements containing these nutrients could reduce progression in patients with intermediate AMD.6

Patients with AMD should be counselled about their diet, and if they are not obtaining adequate quantities of these nutrients through their diet, vitamin supplementation should be considered and discussed with their GP. However, care should be taken with the formulation of these supplements, as beta-carotene supplementation, which formed part of the original AREDS formula can cause an increased risk of lung and stomach cancer in current smokers.7

THE ROLE OF OPTOMETRISTS

AMD is the leading cause of irreversible blindness in Australia. Presently, there are no known cures for AMD, and no treatment for atrophic AMD. The goal for managing patients with AMD should be targeted towards preventing progression leading to irreversible loss of vision. Education here is key – to educate the patients about the things they can change. MM has already suffered significant loss of vision in one eye and I have implored her to understand the consequences of continuing to smoke – and the importance to not only prevent progression in her worse eye, but also to prevent this from occurring in her other eye. Unfortunately I don’t believe this is a battle I can win, but I hope I will stand corrected.