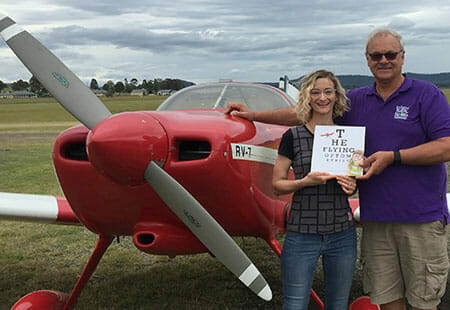 A new children’s book, The Flying Optometrist, aims to make children feel comfortable wearing glasses and open their eyes to the difficulties some children in remote Australia have when it comes to accessing vision care.

The book, written by published author Joanne Anderton, was inspired by the work of her father – optometrist and academic Dr. Phil Anderton. Dr. Anderton travels to remote towns in north west NSW twice a year in the RV-7 twin-seater single engine aircraft he built, to deliver voluntary eye care services. His trips are supported by The Visiting Optometrist Scheme (VOS) and Brien Holden Vision Institute.

“For most children, the process of getting a new pair of glasses involves a couple of trips to the local shopping centre, yet children in remote Australia have to travel or wait for a service like my father’s to arrive in town,” said Ms. Anderton. “I think it’s important for children in metropolitan areas and on the coast to understand how lucky they are.”

Ms. Anderton decided to communicate her message with an adventure story, ‘written from the perspective of a young spectacle wearing girl living in remote Australia. Her glasses are broken, and she has to wait for the Flying Optometrist to travel from the city to the outback so she can get new ones. In the process, children discover just how difficult it can be for kids in outback Australia to access vision correction.

Around the world, there are so many children who don’t have the same access… and yet it is so cheap and easy to fix this

The concept came to her when she travelled with her father on one of his outback trips. “I went with him to do my research and I was struck by the adventure of the whole thing – we flew from the coast across the city, over buildings and lush green vegetation, over open cut mines and increasingly sparse land, until we reached the red sands of the desert. The towns Dad travels to have very poor mobile phone reception so we’d need to fly over the pub – the communal centre of the town – a couple of times to let people know we’d arrived. Then they’d drive out and collect us from the air strip. We’d be welcomed with open arms and taken back to the pub for dinner – the people were so incredibly friendly.”

She admits that in undertaking her research and writing the book, she became “quite feisty” about the importance of her message. “I’m myopic and without my contact lenses or glasses I’m blind, however I am lucky enough to have vision correction. Around the world, there are so many children who don’t have the same access… and yet it is so cheap and easy to fix this.”

The Flying Optometrist was supported by Brien Holden Vision Institute, which saw the value in communicating the message to all children. It has been published by the National Library of Australia, which commissioned Karen Erasmus as illustrator. “Karen was amazing, she absolutely got it – the contrast between the city and the outback, its colours, and the character and personality of the young girl at the story’s centre. I was overwhelmed by her illustrations,” said Ms. Anderton.

The Flying Optometrist, which would be an excellent addition to practice waiting rooms, will be available from all good book stores from early March. Visit: joanneanderton.com