Essilor Commits to Innovation and Partnership 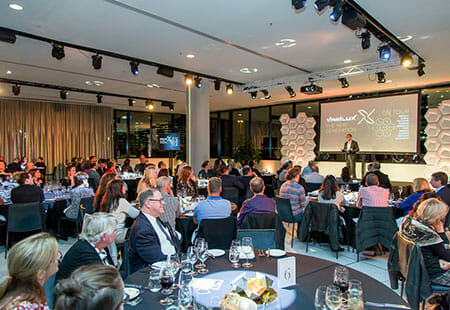 Essilor Australia and New Zealand made a strong commitment to product innovation and to working with practitioners to support their businesses, at a roadshow that toured both countries during April and May.

The roadshow was staged to launch two new products – Varilux X series and Crizal Sapphire UV – described as ‘the latest advances in lenses’, to the growing independent optometry market.

The Wellington event was highlighted by a distinguished guest, Florence Jeanblanc-Risler, the French Ambassador to New Zealand. Mrs. Jeanblanc-Risler said she was pleased by how French companies such as Essilor are supporting industry partnerships and growth in New Zealand.

Essilor has put considerable investment behind the new products and believes they represent an exciting opportunity for optometrists to bring a new level of optical solution to their patients.

Keynote speaker at the Brisbane, Sydney and Parramatta events was Sebastien Fricker, Head of Lens Design at Essilor’s Centre of Innovation and Technology in France. Mr. Fricker presented the research behind the development of Varilux X Series.

Essilor Australia’s Chief Operating Officer, Pierre Longerna, told attentive audiences about the work he has been doing to engage with Essilor’s customers since he took up his position mid last year.

Mr. Longerna’s underlying message was that Essilor in 2018, is about innovation – embodied in the new products – and partnership, with a renewed commitment to work with practitioners to support their businesses.

“I wanted to share with our customers how Essilor intends to partner with them to grow business across the sector and that we will continue to stay ahead of the game in product innovation by leading the industry and responding to competitive challenges in the marketplace,” said Mr. Longerna.

With the Essilor-Luxottica combination on the horizon, Essilor clearly communicated that the two companies will continue to operate independently for a minimum of at least three to five years.