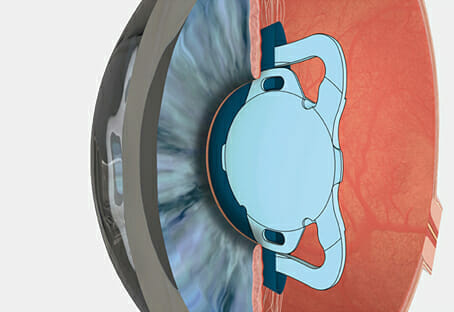 Advances in the design of multifocal and toric intraocular lenses (IOLs) have made centration and rotational stability increasingly important when it comes to achieving optimal postoperative vision results. Patient demands and expectations in terms of their refractive results have also increased.

The introduction of the femtosecond laser for capsulorhexis has made it possible to create a reproducible capsulorhexis with predictable diameter and centration. Oculentis has taken advantage of this technology, developing the Femtis intraocular lens (IOL), which can be anchored in the perfectly circular capsulorhexis using four additional specially designed haptics (Figure1, below). 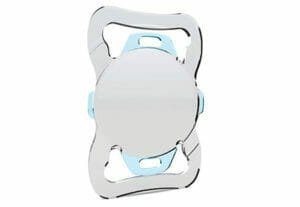 With traditional in-the-bag IOL implantation, capsular shrinkage and fibrosis can increase the pressure on the haptics, which can result in decentration, tilt and rotation of the IOL. This affects the optical quality of the visual system. The Femtis IOL design makes it possible to place the lens in the anterior capsule, resulting in improved stability and centration.¹

A multicentre study, led by Professor Gerd Auffarth from the Department of Ophthalmology, University of Heidelberg, is currently investigating the performance of the Femtis IOL in relation to decentration, rotation, tilt and visual performance. The study includes results on 360 eyes from eight clinics in Germany, Great Britain, Spain and Andorra.

Interim results of the one year post operative study were presented at the European Symposium on Cataract and Refractive Surgery Lisbon, by Prof. Auffarth in October, 2017. These results are presented in the following Figures, along with results from comparison studies. Although the comparison studies are for specific post-operative periods and hence do not absolutely mirror Professor Gerd Auffarth’s study of the Femtis IOL, which reports on performance over 12 months, they highlight significant difference in performance. The Femtis IOL was introduced in a monofocal design in Europe in 2014 and immediately gained support from the eye surgeons chosen by Oculentis to trial the new design.² An extended depth of focus (EDOF) version, based on the Oculentis Comfort MF15 platform, followed soon after and is currently being clinically investigated by Sydney eye surgeon Dr. Patrick Versace. In an article he wrote for CRST Europe, October 2017 edition, on his experience with the Femtis IOL, Dr. Versace stated, “Thus far, patients have achieved excellent spectacle independence and minimal unwanted visual phenomena”.³

The Femtis IOL is currently undergoing post-market evaluation by a few Australian eye surgeons and will be launched in August, 2018.

Emmanuel Calligeros B.Optom. UNSW is a qualified optometrist who owned a practice in the inner city Sydney suburb of Newtown for 34 years. He was clinical supervisor and tutor at the School of Optometry UNSW for 24 years. Mr. Calligeros is engaged as the Clinical and Business Development Specialist – OPS Business Unit at Device Technologies.