Marsden Eye Specialists has commemorated its 70th anniversary with an education seminar presented for nurses, orthoptists, medical students, junior doctors, general practitioners and optometrists at Lachlan’s Old Government House in Parramatta. The practice is one of the oldest specialist ophthalmology practices in Australia.

Describing the times as momentous for innovation and change around the world, Dr. Agar noted that, “The world was still recovering from the disaster of two World Wars and a nuclear holocaust, and colonialism was ending.” He described how, at that time in Australia under the leadership of Ben Chifley, a prototype for the first Holden rolled off the line. In Sydney, the city was beginning a rapid phase of growth and moving westward.

Dr. Graham Henry, one of Marsden Eye Specialists’ founding partners, gave a historical perspective of the practice. He described Dr. Hogg’s establishment of Marsden Eye Specialists in Parramatta as unprecedented, allowing suburban patients access to high level care in their own area for the first time. He said Dr. Hogg was instrumental in advocating for a public hospital in the west of the city, which led to the establishment of Westmead Hospital.

Today, Marsden Eye Specialists has 18 ophthalmologists across three sites in western Sydney, with a laser clinic and day surgery

Today, Marsden Eye Specialists has 18 ophthalmologists across three sites in western Sydney, with a laser clinic and day surgery. Research has always been a focus, with a dedicated Research Centre, coordinated by Drs. Jenifer Arnold and Ashish Agar, which currently has over a dozen ongoing international and local clinical trials.

The commemorative education seminar was chaired by Marsden Eye Specialist partner Dr. Ross Fitzsimmons and Professor Ron Tomlins, a general practitioner from Castle Hill in Sydney. With a series of clinical presentations delivered by many of the practice’s doctors, Prof. Tomlins said the day was a valuable opportunity “for the people in the room to know when to seek the expertise of ophthalmologists when managing our patients.” 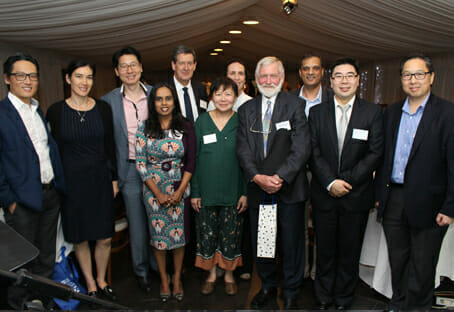 The team at Marsden Eye Specialists