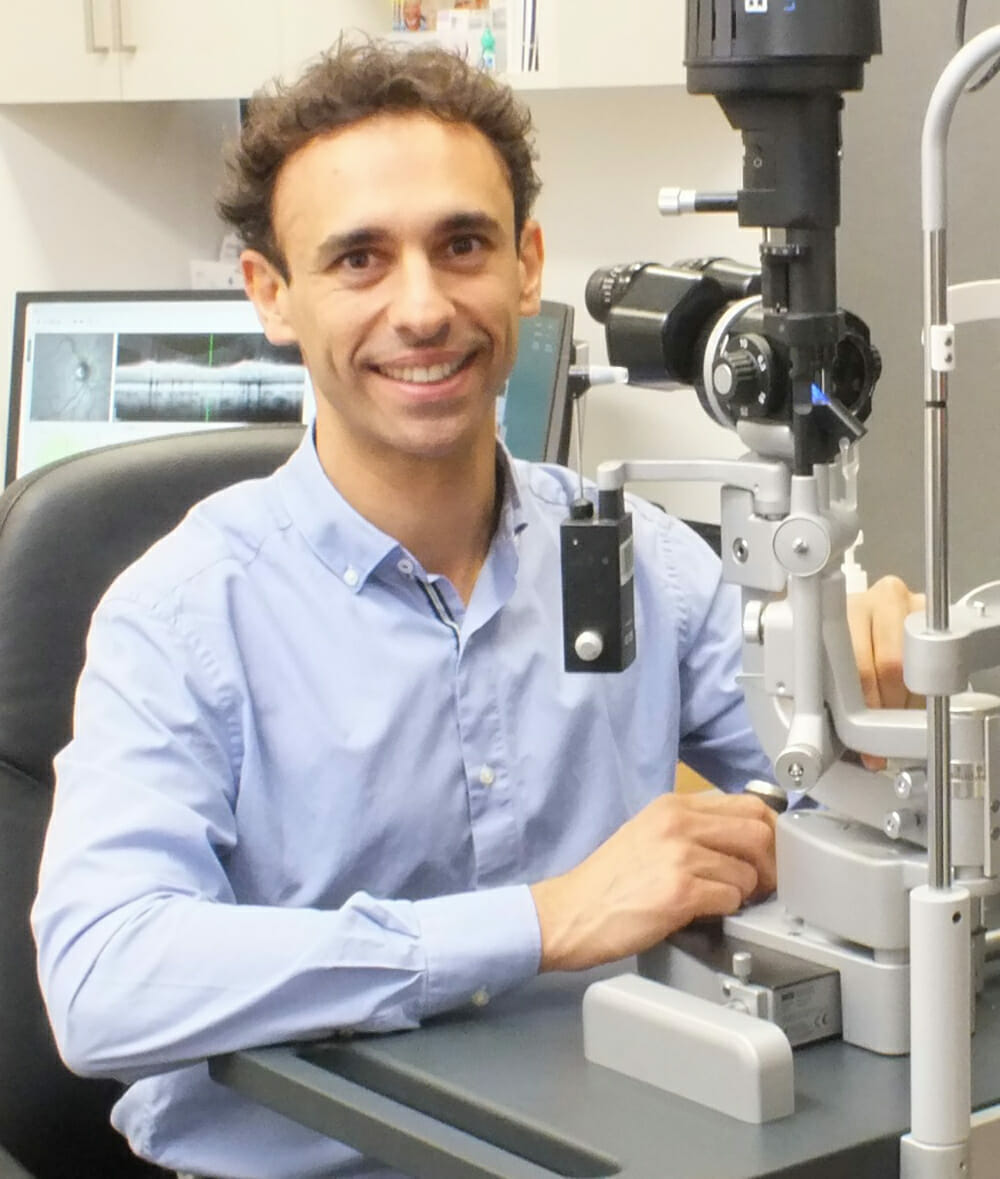 Dr. Rallah-Baker chose to study ophthalmology over other disciplines in medicine because of the enormous burden of eye disease in Australia’s indigenous communities. He completed his vocational training in late June, having spent six months on the ground with the outreach arm of Lions Outback Vision in Western Australia.

“I was interested in practising ophthalmology because unlike many specialities we can transport equipment to diagnose and treat many eye diseases directly in areas of need, so we can restore vision and get people back out to country,” said Dr. Rallah-Baker.

“When anyone loses their vision it impacts their day to day life. When older indigenous people lose vision it also impacts the wider community – if they can’t see, they can’t go to country, they can’t get to sacred sites to perform ceremonies, or collect bush food, and they can’t teach younger people about our culture. So we start to lose our culture. By restoring vision, this doesn’t need to happen.”

Additionally, Dr. Rallah-Baker said restoring sight has the broader benefit of reducing falls and enabling people to get more exercise, which can improve cardio vascular health and reduce diabetes.

Dr. Rallah-Baker was born in Canberra but grew up in Brisbane, one of four sons to a “remarkable family”. Two of his brothers are now dentists and his third brother is still deciding on his future direction. Dr. Rallah- Baker said through a “twist of history” his great grandmother had escaped The Protection of Aborigines Act, 1869, which gave extensive powers over the lives of Aboriginal people to the government’s Board for the Protection of Aborigines, including regulation of residence, employment, and marriage.

“Because my great grandmother escaped The Protection of Aborigines Act our family was fortunate to remain together and have stability. My mother’s mother was an amazingly strong Aboriginal woman and the first indigenous art curator in the country. Her daughter – my mother – was also amazing – a hard worker with intelligence to achieve. My father was also a strong man.”

“After high school I went to Newcastle to study medicine. I chose Newcastle because it was progressive and had a relatively strong cohort of indigenous students,” he said.

Dr. Rallah-Baker was one of 20 students of medicine and he said he would not have completed the program of study without the support of the other four indigenous students in his year.

“There is deep set institutionalised racism in a lot of colleges and public hospitals. There was an incorrect assumption amongst other students that I had been accepted at the university because I was indigenous and, therefore, I was taking the seat of someone more academic. In class, there was the added pressure of being expected to be an expert on the topics of indigenous health and society.”

Additionally, he said, while most students had role models and mentors, he had none.

“There are a lot of people in Colleges because of who they are as opposed to being there despite who they are – and there’s a big difference. If you’re there despite who you are, you haven’t had the ‘table talk’ about becoming a doctor as young person, you don’t have a role model to benchmark yourself against or to say to you, ‘I did it, you can too’.

“Some senior colleagues told me unequivocally that I wouldn’t get through, however that made me more driven to complete my studies – when you come from a family that had nothing you’re not scared to go back to nothing, so you’re prepared to put everything on the line.

“I don’t believe the public hospitals and colleges have really thought through all of these additional pressures and stresses that indigenous trainees typically face.”

Now that he has completed his studies and vocational training, this is something that Dr. Rallah-Baker is already working to change.

“Being the first Indigenous ophthalmologist in Australia is of enormous importance, both symbolically and practically, because it breaks barriers that were once seen as impossible.

“On a formal basis, I’m already mentoring medicine students who want to move into specialities – two of them are interested in ophthalmology.

“On an informal basis, I see myself having wider responsibilities as a mentor. My hope is that by being visible in the community, young indigenous people will see what I’m doing and it will spark an interest – they’ll say, ‘if he can do it, I can too’ – and they will benchmark themselves against me.”

Dr Rallah-Baker is also having an immediate impact on the patients he has been seeing while working with Lions Outback Vision. He said his patients were excited to see an Indigenous face on the other side of a slit lamp during eye examinations.

“It brings them great pride and joy to know that Indigenous people are achieving across all fields and expressing the opinions and cultural perspectives from within organisations to help improve lives,” he said.

“Kris is already making a big impact on the profession as a leader and advocate,” he said. “With Indigenous Australians three times more likely to be blind than the general Australian population, Kris’ voice will help focus attention on this significant public health issue.”

“The Lions Outback Vision model is an exceptional example of the correct way to deliver appropriate, culturally safe services to rural and remote communities, and there are many wonderful non-Indigenous doctors providing outstanding services to Indigenous peoples and communities – Angus Turner being a leader in ophthalmology,” he said.

Having finished his vocational training with Lions Outback Vision, Dr. Rallah-Baker has returned to Brisbane where he plans to pursue his career in public and private ophthalmology. He will also continue to contribute to indigenous eye health outcomes through metropolitan and outreach work and via his role as Vice president of VP of the Australian Indigenous Doctors Association (AIDA). After five years of lobbying, AIDA was recently granted a permanent place on the Australian Medical Association Council, indicating as Dr. Rallah-Baker acknowledges, that positive change is slowly happening.