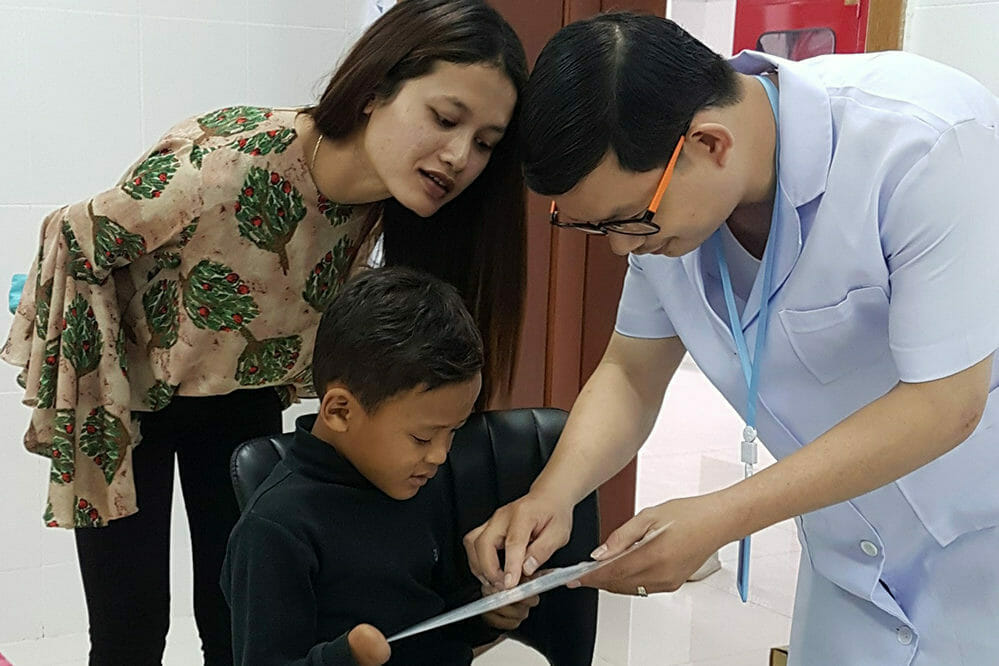 Access to basic eye care services, that we take for granted, is changing the future for people in developing nations, like Cambodia.

Eleven year old John (not his real name), lives in a rural province in Cambodia, 200 kilometres from the capital Phnom Penh. We saw him at the Khmer Soviet Friendship Hospital, seven months after he had managed to find some explosives and set them off. This accident caused him to lose his right hand, and caused traumatic cataracts in both eyes. He was left with facial scarring, corneal scarring, and some shrapnel embedded into his corneas (Figures 1 and 2). When the cataracts were removed, John was left aphakic. He also suffered damage to his right macula.

Because of his reduced acuity, a contact lens was only prescribed to John’s left eye. His carer was taught to insert and remove the lens.

with the contact lens, it was much easier to see to kick the ball, and easier at school as he could now see the whiteboard

John and his carer returned two weeks later to report that the lens had fallen out and been lost. The carer said John had never been comfortable with the lens – he had rubbed it constantly and struggled to keep his eye open with it. John was refitted with CooperVision Biofinity XR 8.6/14.0/+15.00 for his left eye.

When John was reviewed two weeks later, no problems were noted and John said he found the soft contact lens far more comfortable to wear than the RGP lens.

Contact lens acuity was L 6/18. No overrefraction was noted. John could read N6 at near. He had been provided with +2.50DS magnifiers but his carer reported that he did not use them as he said he did not need them. When we asked his carer about how the contact lenses had impacted John’s life, she said the change had been significant. Before the lens, John had walked into things and fallen over a lot, resulting in frequent injuries. Being a hyperactive child, John found it difficult to keep still and consequently, was constantly covered in bruises and scratches. However, since wearing the contact lens, he was injuring himself much less.

When we asked John how the contact lens had impacted him, he said prior to wearing them it had been difficult to play soccer as he couldn’t see the ball. Now with the contact lens, it was much easier to see to kick the ball, and he found school better as he could now see the whiteboard. 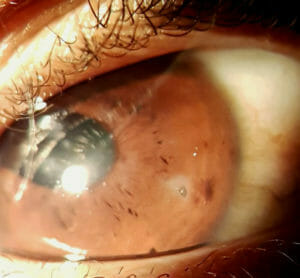 THE GIFT OF SIGHT

In the first world, we take the gift of sight for granted. As optometrists, it can be easy to become bored and jaded by what we do – but cases like this remind me of what we do – we provide sight.

When I met John, I felt the strain of limited resources for this patient. Ideally I would have taken corneal topographies to properly understand his ocular shape, and I would have fitted him with a rigid gas permeable or a mini-scleral contact lens which would have provided him with superior visual acuity. With corneal scarring and no doubt some corneal irregularity, he would have achieved improved acuity with a rigid lens.

The contact lens practitioner in me was annoyed that I could not give John better vision in his only seeing eye. However, as I watched him run around the consulting room kicking a ball, I realised that his 6/18 vision was really quite amazing. And I reminded myself of how lucky we are to live in a world where +15.00 monthly silicone hydrogel contact lenses are available. These lenses are simple to fit, disposable, high Dk, comfortable, and available in stock.

However, this realisation was also bittersweet. It reminded me that there are millions of people around the world who are sight impaired due to limited resources and it reminded me of why I became an optometrist. 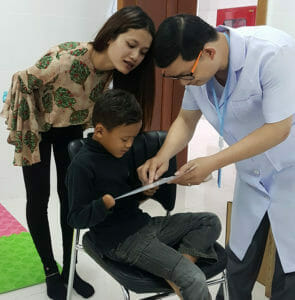 Sight is our most dominant sense. It occupies half of our brain’s resources,1 and approximately 80 per cent of all that we perceive is achieved by sight.2 It devastates me to know that one of the biggest causes of visual impairment is lack of access to refractive correction. Being visually impaired; i.e. moderately myopic, I understand what it means to not be able to see clearly. However, my ‘impairment’ is hardly an issue – I have easy access to spectacles and contact lenses to correct my sight to 6/5 in both eyes. There have been times when I have lost my contact lenses or my spectacles, leaving me feeling extremely vulnerable. However, I know the problem will be short-lived as I have multiple other spectacles and contact lenses at home and at work. I cannot imagine my vision being uncorrected, yet for many in the world, it is.

To find out more about Sight For All, please visit sightforall.org 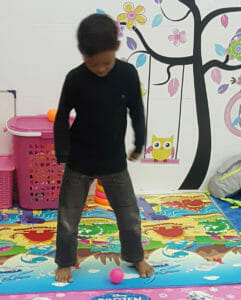 Jessica Chi is the director of Eyetech Optometrists, an independent specialty contact lens practice in Melbourne. She is the current Victorian, and a past National President of the Cornea and Contact Lens Society, and an invited speaker at meetings throughout Australia and beyond. She is a clinical supervisor at the University of Melbourne, a member of the Optometry Victoria Optometric Sector Advisory Group and a fellow of the Australian College of Optometry and the British Contact Lens Association. Jessica writes ‘mipatient’ on alternate months with Margaret Lam.

Jessica Chi is the director of Eyetech Optometrists, an independent specialty contact lens practice in Melbourne. She is the current Victorian, and a past National President of the Cornea and Contact Lens Society, and an invited speaker at meetings throughout Australia and beyond. She is a clinical supervisor at the University of Melbourne, a member of the Optometry Victoria Optometric Sector Advisory Group and a fellow of the Australian College of Optometry and the British Contact Lens Association. Jessica writes ‘mipatient’ on alternate months with Margaret Lam.