Australians with low vision have become some of the first in the world to gain the advantages from a “revolutionary” wearable device that can restore vision and monitor vision loss.

The IrisVision significantly improves visual function for patients with a broad range of diseases that lead to vision loss. These diseases include age-related macular degeneration, Stargardt’s disease, and retinitis pigmentosa. It also improves vision for patients with glaucoma, diabetic retinopathy, ocular albinism, cone rod dystrophy, and retinopathy of prematurity. IrisVision is working on solutions to compensate for central visual dysfunction caused by stroke and head trauma.

You feel like you’ve entered into the visual world

The Samsung device has the appearance of a smartphone but is unable to make telephone calls at this stage. It has a 12 megapixel camera and 70 degree field of view on a powerful LED HD display, which sits right in front of the wearer’s eyes. The wearer can choose how they wish to view subject matter, with images projected onto the full screen that appear as large as an IMAX screen, with or without a self-directed ‘iris bubble’ of magnification, or as a bioptic screen. Mr. Werblin said thanks to Samsung’s technology, it has automatic focus and vision that is clean, crisp, and more colourful than other magnifiers. Importantly, the software can be automatically updated so that users will not be compelled to regularly invest in new expensive hardware.

Tom Perski, IrisVision’s Global Vice President of Professional and Consumer Outreach and an IrisVision user, said the device provides an immersive experience, enabling the wearer to see an entire room while at the same time, zooming in to a particular area to capture the detail.

“You feel like you’ve entered into the visual world,” he said, describing his experience in an art gallery where, for the first time since losing most of his sight to Stargardt’s disease, he was able to see an entire painting along with the finest brushstrokes. “I felt normal again, it was a life changing moment,” he said.

Although the device is somewhat cumbersome to look at and wear, Mr. Werblin says people with vision impairment quickly overcome any concerns about aesthetics once they have experienced this life changing moment. 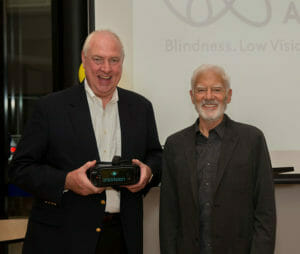 Tom Perski with the IrisVision and Dr. Frank Werblin

Being WiFi enabled, Dr. Werblin said IrisVision can significantly reduce the burden of attending clinics for follow up by allowing doctors to remotely detect progression of an ocular disease. “IrisVision is a form of telemedicine because the clinician can see what the patient is seeing in real time, when they are using the headset. So he or she can see their response to visual patterns and detect any scotomas, and any changes over time.”

Additionally, he said, clinicians can provide the wearer with exercises aimed at stimulating the neural circuitry that mediates the retina’s processing capabilities in an effort to restore sight. As more algorithms are developed, this capacity will be further enhanced.

Mr. Perski said the device is more affordable than other technology of its kind and easy to use with a simple directional swipe function on the temple, however training is important.

“Training is crucial and needs to be consistent regardless of country. For this reason we are developing a training program within the headset to help people get used to the IrisVision’s functionality and the depth of field it provides. This will be essential for day-to-day living.” IrisVision, and wearer training, is available from Vision Australia.