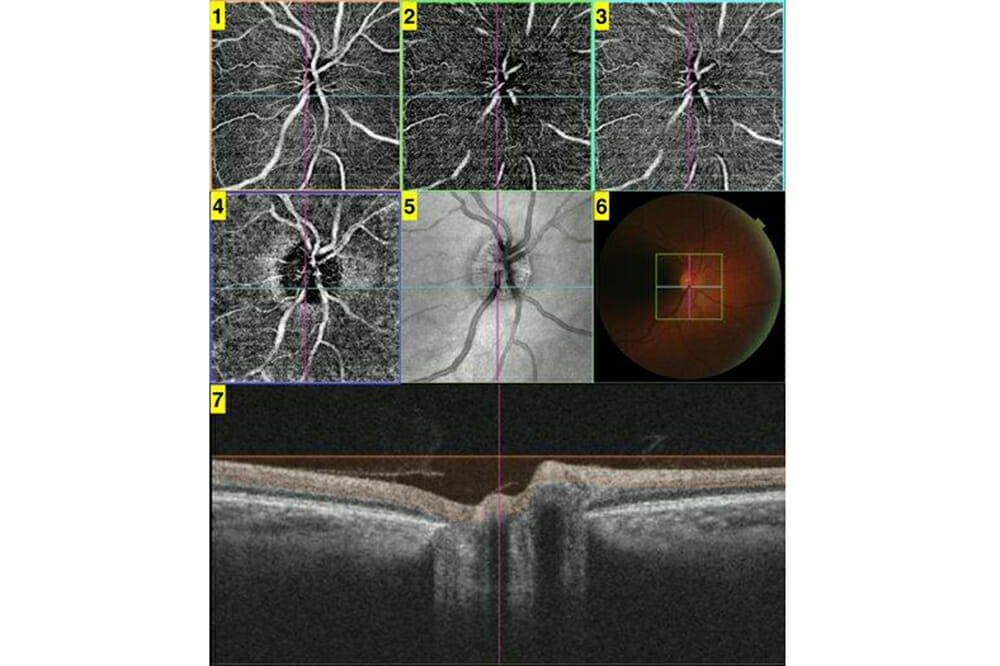 Optical coherence tomography angiography (OCT-A) has been used to detect evidence suggesting Alzheimer’s in older patients who had no symptoms of the disease.

The study, conducted by researchers at Washington University School of Medicine in St. Louis involved 30 patients, and was published on 23 August 2018 in the journal JAMA Ophthalmology.

“This technique has great potential to become a screening tool that helps decide who should undergo more expensive and invasive testing for Alzheimer’s disease prior to the appearance of clinical symptoms,” said the study’s first author, Professor Bliss E. O’Bryhim, a resident physician in the Department of Ophthalmology & Visual Sciences. “Our hope is to use this technique to understand who is accumulating abnormal proteins in the brain that may lead them to develop Alzheimer’s.”

the researchers used OCT-A to examine the retinas in eyes of 30 study participants with an average age in the mid 70s, none of whom exhibited clinical symptoms of Alzheimer’s

Significant brain damage from Alzheimer’s disease can occur years before any symptoms, such as memory loss and cognitive decline, appear. Scientists estimate that Alzheimer’s-related plaques can build up in the brain two decades before the onset of symptoms, so researchers have been looking for ways to detect the disease sooner.

Physicians now use PET scans and lumbar punctures to help diagnose Alzheimer’s, but they are expensive and invasive.

In previous studies, researchers examining the eyes of people who had died from Alzheimer’s have reported that the eyes of such patients showed signs of thinning in the center of the retina and degradation of the optic nerve.

In the new study, the researchers used OCT-A to examine the retinas in eyes of 30 study participants with an average age in the mid 70s, none of whom exhibited clinical symptoms of Alzheimer’s.

Those participants were patients in The Memory and Aging Project at Washington University’s Knight Alzheimer’s Disease Research Center. About half of those in the study had elevated levels of the Alzheimer’s proteins amyloid or tau, as revealed by PET scans or cerebrospinal fluid, suggesting that although they didn’t have symptoms, they likely would develop Alzheimer’s. In the other subjects, PET scans and cerebrospinal fluid analyses were normal.

“In the patients with elevated levels of amyloid or tau, we detected significant thinning in the center of the retina,” said co-principal investigator Professor Rajendra S. Apte, the Paul A. Cibis Distinguished Professor of Ophthalmology and Visual Sciences. “All of us have a small area devoid of blood vessels in the center of our retinas that is responsible for our most precise vision. We found that this zone lacking blood vessels was significantly enlarged in people with pre-clinical Alzheimer’s disease.”

OCT-A allows a doctor to measure retinal thickness, the thickness of fibers in the optic nerve, and distinguish red blood cells from other tissue in the retina.

“The angiography component allows us to look at blood flow patterns,” said the other co-principal investigator, Gregory P. Van Stavern, MD, a professor of ophthalmology and visual sciences. “In the patients whose PET scans and cerebrospinal fluid showed pre-clinical Alzheimer’s, the area at the center of the retina without blood vessels was significantly larger, suggesting less blood flow.”

Added Apte: “The retina and central nervous system are so interconnected that changes in the brain could be reflected in cells in the retina.”

More studies in patients are needed to replicate the findings, Prof. Van Stavern said, but he noted that if changes detected with this eye test can be used as markers for Alzheimer’s risk, it may be possible one day to screen people as young as their 40s or 50s to see whether they are at risk for the disease.

“We know the pathology of Alzheimer’s disease starts to develop years before symptoms appear, but if we could use this eye test to notice when the pathology is beginning, it may be possible one day to start treatments sooner to delay further damage,” he said.

Eyecare Plus and Eyepro Announce Affiliation