In the 50th year of The Royal Australian and New Zealand College of Ophthalmologists (RANZCO), over 200 enthusiastic delegates attended the New South Wales annual scientific meeting, and supported the corresponding trade exhibition.

The theme of the conference, held in Sydney during March, was Ophthalmology: current waves and over the horizon. 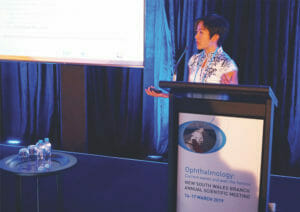 As always at RANZCO scientific meetings, the presentations are diverse, detailed, and impossible to cover in one article in mivision. Instead here, we share a few highlights.

In Robots and us: what the future looks like for cataract and refractive surgery, we heard how artificial intelligence (AI) can assist screening for ectasia risk. Laser remains a cornerstone of current surgery, robotics and AI.

A presentation titled Artificial Intelligence in medical retina, considered the global diabetes epidemic. Traditional screening methods do a great job but are highly variable in diagnosis and action. AI and deep learning are heralded as a cost effective solution. Such systems show great sensitivity and specificity. In August 2018, the US Food and Drug Administration approved a system for autonomous (human free) detection and grading of diabetic retinopathy (DR). This should provide worldwide improvements in DR detection and management, and is the first AI system approved for human use in medicine.

Nanodrop self-treatment, following refraction at home with a smart phone and a clip-on mini laser can treat refractive error for a few days and can then apparently be repeated! Camera integrated smart implants have yet to see the light of day. Presbyopic drugs are undergoing trials to reduce or delay presbyopia onset and cataract. On demand cataract surgery is also happening; no anaesthetist or needles, with surgery done same day, walk in, walk out. Robotically assisted retinal surgery has been shown to increase resolution and accuracy.

Robotic cataract surgery is evolving, both autonomous or surgeon assisted.

Nanotoxicity needs to be considered. Evaluation of the direct effects of materials on physiological function of cells needs further investigation and understanding. Placing materials in the body, where not normally present, may lead to inflammatory responses and complications. 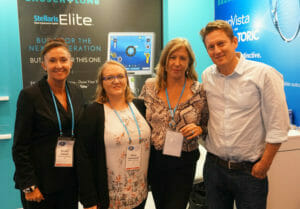 A/Prof Wong concluded that nanoparticles provide new ways to deliver drugs and therapeutics, for better targeted personalised medicine. She noted that biologically derived materials can have advantages over synthetics, but caution should be exercised regarding secondary effects of particles. The site of application matters.

A/Prof Wong’s other talk Scar Wars: a new hope for 2020, dealt with optimising surgical outcomes following trabeculectomy. A monocyte chemoattractant protein-1 receptor inhibitor (MCP-Ri) is being developed. Surgery mobilises peripheral macrophages/T cells to the site of injury. Local steroid treatment may be insufficient. Orals NSAIDs seem to be beneficial. Valproic acid, traditionally used for neurological disorders, but repurposed for anterior segment use shows potential benefits. We need to understand the role of all cellular players in wound healing. A single ‘master switch’ for preventing fibrosis is the holy grail, but likely not possible.

A keynote address by Associate Professor Lyndell Lim from Melbourne titled Update on medical therapies for Uveitis, looked at monoclonal antibodies and the biologic war on uveitis. There is not yet a universal treatment that is effective or free of toxic side effects. A series of interesting case studies illustrated some of the current best practice management strategies of uveitis. In one complex case, with many complications, Humira (adalimumab) helped greatly. 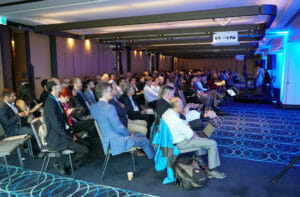 Tumour necrosis factor (TNF) and its various types were discussed, including the aforementioned adalimumab. Detailed analysis of results showed this therapy can be highly effective, but treatment doesn’t work for everybody. Interferon and other treatments were also detailed.

Where to from here?

Models show there are multiple pathways in uveitis. Unusual side effects can have dire consequences. Biologics are having an influence in all spheres of medicine, not just ophthalmology.

Checkpoint inhibitors like anti CTLA-4 IgG-k MAb, used in some medical treatments like cancer, can have significant side effects and induce autoimmune disease and uveitis. Topical, local and injected steroids should be used in such cases but avoid oral steroids. Risk versus benefit must be considered: will the eye side effects be a small risk compared to loss of life from cancer?

A/Prof Lim concluded that new therapies to treat immune-mediated disease – or those that harness the immune system as a treatment in itself – are emerging exponentially, with many clinical trials underway. She cautioned that surprises occur and early adopters should beware. She also noted that biologic response modifiers lack long term safety data and should be precluded as first line treatments for most inflammatory diseases at this time. Her other talk centred around investigating the uveitic patient and all that encompasses.

Professor Ron Adelman from Yale delivered his keynote talk, The history, the present, and the future of anti-VEGF agents and other monoclonal antibody agents in the treatment of diseases of the retina. 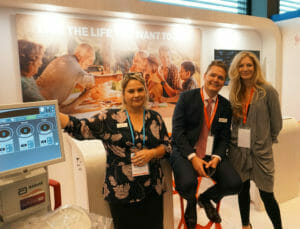 He described the background and evolution of anti-VEGF, a class of agents that were originally developed to shut down blood supply to tumours in order to wipe them out through ischemia. There are a variety of antiangiogenics but we have fine-tuned those that are most effective for medical retinal treatments. rhuFab VEGF, later known as ranibizumab (Lucentis), was discussed in detail; including its development and early retinal trials. Avastin (bevacizumab), also entered the picture and both are still widely used. Other anti-VEGF drugs have now come to be, while future treatments are looking at drugs such as brolucizumab, which is showing promise, as is abicipar pegol, but this agent shows some inflammatory side effects and is being reformulated. Prof Adelman also discussed the aforementioned ‘port delivery systems’ which will result in longer action and fewer injections. Oral treatments are also being developed.

He also presented on Retinal arterial embolism, sharing some interesting cases detailing the pathogenesis of emboli with imaging and histopathological analysis.

He spoke about ‘angiophagy’, explaining a novel mechanism of microvascular recanalisation, with extravastion occurring one to six days after occlusion in >80% of occluded vessels. They call this ‘cleaning the pipes via angiophagy’, where the body actually resolves many emboli/occlusions without us even being aware of them.

Current guidelines suggest that central retinal artery occlusion (CRAO) should be referred to a stroke centre for thorough investigation in order to reduce risk and improve outcomes.

The annual RANZCO NSW conference was a good mix of clinical, research and crystal ball gazing, robust discussion in the Q&A sessions with positive contributions from enthusiastic delegates and some humour to boot. Sponsors and exhibitors were kept busy and were happy with delegate interaction and support.