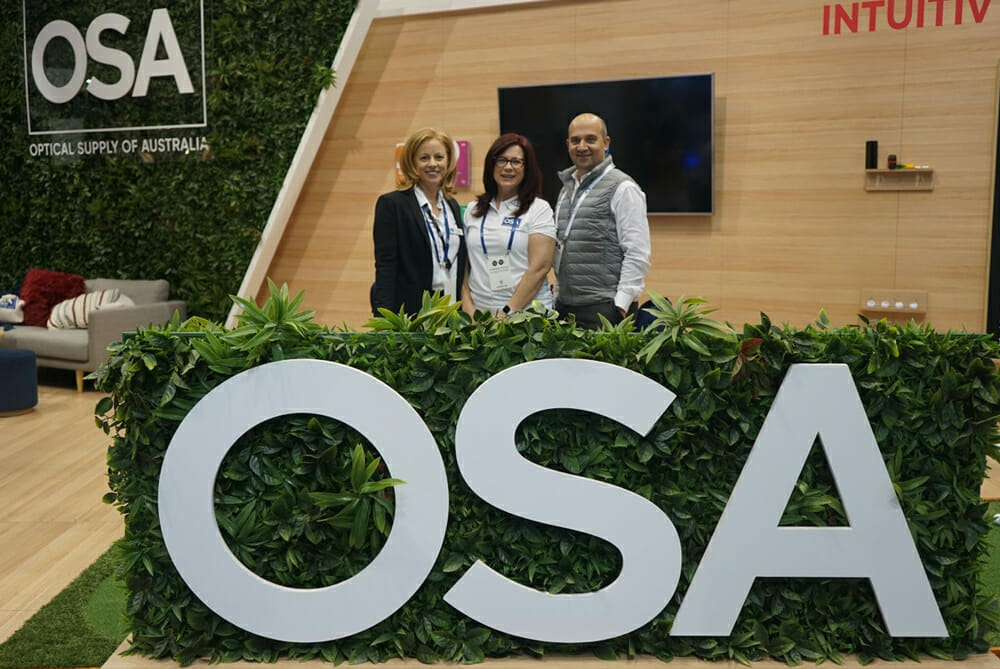 Optical industry suppliers were overwhelmingly impressed by O=Mega19 in July, which provided the opportunity to showcase products and services to buyers from Australia, New Zealand, Asia, Europe and beyond. The Melbourne event, organised by the Optical Distributors and Manufacturers’ Association (ODMA) and Optometry Victoria/ South Australia (O V/SA), combined the biennial ODMA Fair with the annual Southern Regional Congress for the first time.

The O=MEGA trade show attracted 5,590 trade visits over three days and according to ODMA Chair Robert Sparkes, was the best in more than 10 years.

“Overall we got it just about right and the entire event generated positive feedback from exhibitors, delegates and visitors. Of course being a venue that is new to ODMA, there were small things we can learn from and use to fine tune our next O=MEGA trade fair,” he said.

Mr Sparkes has been ODMA Chair since November 2015 and was one of the architects of the successful joint venture with O V/SA He is also a long standing exhibitor at ODMA events with his business, Optimed.

Commenting from an exhibitor’s perspective he said, “We had people who had done all their research and they came to O=MEGA ready to make a decision and wanting to take advantage of manufacturers’ special offers. There were others who wanted to have a look at everything and make a decision or arrange product trials at a later date.”

William Robertson, from Designs for Vision, said although sales generated at O=MEGA19 had not exceeded results from previous trade fairs, orders had continued to flow in the weeks post event.

“To put this in perspective, we have had some ODMA Fairs that, based solely on stand sales, should have been called ‘ODMA Extraordinaries’, so to not match or exceed this during O=MEGA was initially disappointing… however with follow up sales, any disappointment has given way to elation and assured Designs for Vision a strong start to the ‘19-20 financial year.

“Sales were led by the introduction of devices like the multi-modality Tomey MR-6000 and a very well-priced Nidek ALScan optical biometer for monitoring myopic progression. OCT remains a strong contender,” said Mr Robertson.

Helen Gleave and Megan Zabel, professional affairs at Alcon Vision Care, felt the new event was highly successful for Alcon. “Our stand was well attended and we were also able to host dry eye workshops with presentations by Jason Holland, which attracted twice as many people as anticipated. We had optometrists staying back well after the presentations to talk further.”

“O=MEGA worked well for us because it attracted more eye care professionals than we typically see at ODMA or SRC alone,” said Mr Hentschel. “We had a huge number of people coming onto the stand, and were very pleased with the result”.

Matthew Wensor, strategic marketing manager at Zeiss was also pleased with interest generated. “There was great interest in our newest technologies, in particular, we had two Clarus 500 ultra-widefield fundus cameras on display and we could have done with a third since they were in such high demand. Similarly, we showed the Visufit 1000 digital centration platform for the first time in Australasia and it proved very popular, often attracting a crowd of people, all lined up for a demonstration.

“We were happy to contribute to the scientific programme via our break-out session where we had three compelling presentations from Dr Luke Chong, Dr Graham Lakkis and A/Prof James Armitage on the new 24-2C test pattern on the HFA3, the Clarus 500 and AngioPlex OCT angiography respectively.”

Speaking to mivision at O=MEGA, Essilor Chief Operating Officer Pierre Longerna said “The market is growing and needs are changing. There have to be clear value propositions. Essilor is working hard to help optometry practices across Australia to grow, with a range of lenses to cater to different markets. We are also working with some frame suppliers and have their frames in our labs so we can provide lens and frame packages.