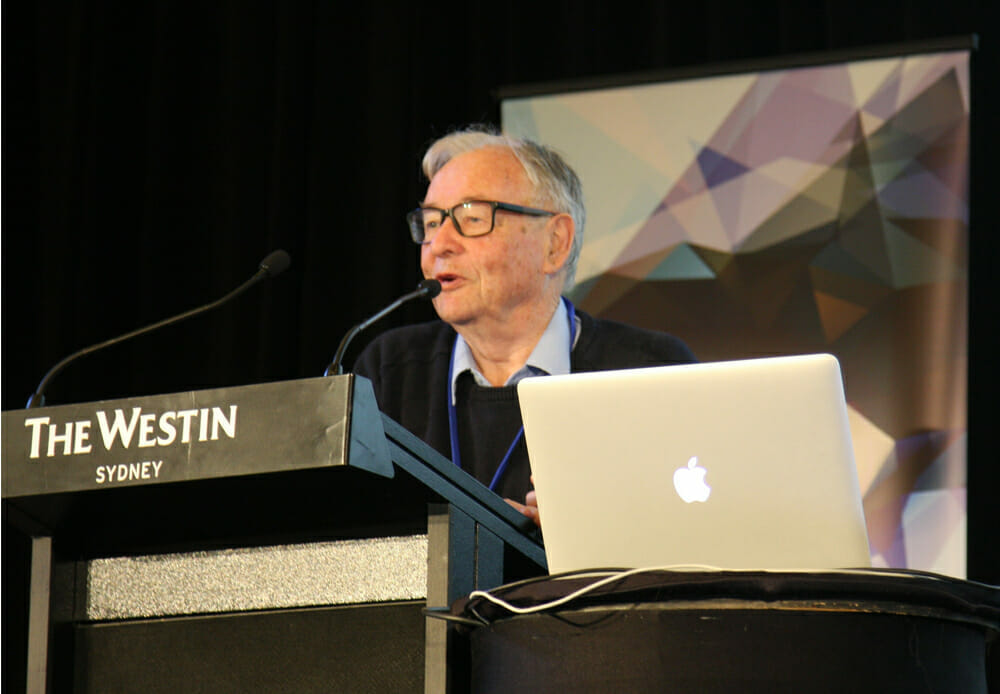 A highlight at this year’s conference was a presentation on myopia, delivered by Professor Ian Morgan, who succinctly and convincingly argued that “myopia is not genetic, it is primarily environmental”.

Professor Morgan graduated from the University of Melbourne in biochemistry, then completed a PhD in neuroscience at Monash University. In 1995, despite having no clinical training, he became interested in myopia because of the link between retinal dopamine and experimental myopia.

Commencing a comprehensive presentation, Prof Morgan said much of the confusion surrounding the origins of myopia come from failing to identify that myopia is a very diverse condition, which can be categorised broadly as:

Keratoconic and cataract myopia should not be confused with axial myopia, which is itself heterogenous.

Focussing on axial myopia, Prof Morgan said there are 200 rare genetic forms of axial myopia and yet they only account for myopia in 1–2% of people in any population.

He referred to the majority of cases as being “school myopia” – in other words, myopia that develops while a child is at school and this can effect anywhere from 0% to 90% of the school population, depending on the magnitude of environmental and educational exposures. Without some exposure to schooling, very few children become myopic.

The prevalence of myopia in children leaving school in East and South East Asia has dramatically increased along with economic development as parents have recognised that educational opportunities are the best way to help their children improve their social and economic standing. Using China as an example, Professor Morgan said rapid increases in myopia were first observed in this population after the end of the cultural revolution.

Although the emphasis on education is associated with myopia, this is not to say that the countries with the greatest literacy in the world are those with the highest prevalence of myopia. Professor Morgan pointed to several European countries (including Norway and Finland) which lead the world in literacy. Instead, myopia prevalence is also associated with excessive time spent studying indoors, and therefore lack of time spent outdoors – there is evidence to suggest the latter is a strong risk factor.

He defined the following characteristics of the South and South East Asian education systems:

Prof Morgan gave an example of South Korea, where one report from the capital city, Seoul, suggests that up to 96.5% of males completing secondary school are now myopic, with over 20% highly myopic. There, schools no longer set homework – not because it is recognised that children need more down time – but rather because children are typically sent to coaching after school for several hours, leaving little to no time for homework. Such has been the uptake of coaching in Korea that laws have been introduced and enforced to ensure that coaching schools close at midnight so that children can go home.

Prof Morgan said while the general Australian population of European descent does not have a high prevalence of myopia, the population of Australians of East and South East Asian descent do. “This is because when people from these countries move to Australia, they bring with them the same cultural emphasis on education and avoidance of sun exposure,” he said.

We know that approximately 10% of people who have myopia will progress to higher myopia, the consequence of which is low vision and blindness. Prof Morgan pointed to recent work from East Asia which suggests children who become myopic early in primary school almost inevitably will become high myopes. If they’re not myopic at the end of primary school they’re unlikely to become high myopes.

“So that tells us we need to focus attention on preventing myopia in the early primary school and even pre-school years,” he said.

Professor Morgan said treatment of myopia is essential and today there are increasing options available. He, like Professor Frank Morgan who spoke before him, said atropine has been shown to be highly effective in controlling myopia progression. However, he said that, putting orthokeratology to one side, there are several other treatment options, including CooperVision’s MiSight contact lenses. Applying the “grandfather test” (ie, how would you treat your own grandchildren) he said he would probably suggest contact lenses rather than using atropine. DIMS spectacles, which were developed and are now available in Hong Kong, are another promising, minimally invasive option and, “if the results presented by investigators are confirmed in an independent trial, they would zoom up ahead of atropine”. However, he acknowledged that atropine will remain an important solution, particularly in rural areas of countries like China where a low tech solution is logistically important. Professor Morgan stressed that this is a very active area of research, and that those in practice need to try to keep up with the latest evidence.

Since retiring in 2010, Professor Morgan has pursed his interest in trialling myopia prevention strategies in schools, based on increased time outdoors, changes in curriculum, and reduction in competitive aspects of school systems.

Concluding his presentation, he said in China there needs to be a concerted effort to educate government, institutions and community about the risk factors of myopia and avoidance strategies. However in Australia, where prevalence is far from being at epidemic proportions, he said the clinical emphasis should be on how to prevent early-onset myopia from progressing to high myopia, combined with education of parents and teachers about the early signs of myopia.

Vascular Tumours of the Fundus

Dr James Muecke, an ophthalmic oncologist from the South Australian Institute of Ophthalmology, spoke on vascular tumours of the fundus and the use of photodynamic therapy for ophthalmic tumours.

In his presentation on vascular tumours, he discussed the neuro-oculo-cutaneous syndromes (phakomatoses) in children, emphasising the need to ask four key questions:

Are there any cutaneous clues to the diagnosis?

Is there a threat to vision?

Is there a threat to body or life? And

Is there a threat to family?

The fundal tumours in Von Hippel Lindau Syndrome (VHLS) and Sturge Weber Syndrome (SWS) can threaten the vision early in life and so a prompt diagnosis and close surveillance are warranted. All of the syndromes can develop CNS tumours and so neurological input is critical. VHLS patients can also develop systemic life-threatening tumours, which need to be screened for by physicians. There is a familial risk in VHLS and cavernous haemangiomas, and so screening of family members should always be considered.

The major vascular tumours in adults are circumscribed choroidal haemangioma, solitary retinal angioma, and retinal vaso-proliferative tumours. All have vision-threatening exudative complications that need to be managed by specialists with experience in this field. In all of these conditions, photodynamic therapy with Visudyne should be considered as first-line treatment.

In Dr Muecke’s presentation on the use of photodynamic therapy for ophthalmic tumours, in addition to his discussion of its use in the management of vascular fundal tumours (above), he explained why this modality has a place in the treatment of vision-threatening choroidal osteoma (not for sub-foveal lesions) and choroidal metastases, however he said it has a limited role in children and its use for amelanotic choroidal melanoma was cautioned in view of the unacceptable recurrence rate.

Clinical Associate Professor Chameen Samarawickrama, spoke about bacterial keratitis, a common disease with regional variation, making it important for eye health professionals to be aware of the common bacteria in their own region.

Understanding the risk factors for keratitis is also important – with contact lens use increasingly becoming a major risk factor, and Pseudomonas the most common pathogen in these cases.

Clinical Associate Samarawickrama described the principles of management: first sterilise the eye, then limit inflammation that causes scarring. Empirical therapy is fluoroquinolone monotherapy (ofloxacin), with clear evidence that it is as efficacious as gentamycin/cefazolin dual therapy without the side effects.

Steroids play an important role in preserving vision in bacterial keratitis and early use of steroids has a one line benefit in vision at one year according to the SCUT trial.

Neurotrophic corneas are difficult to manage because many treatments are suboptimally effective in advanced cases. Clinical Associate Samarawickrama described neurotisation is an “exciting new treatment” for neurotrophic corneas, which is being offered at Liverpool Hospital. Patients are currently being actively recruited. He said this is the only method for treating the root cause of a neurotrophic cornea – the damaged nerve supply. Treatment involves transplantation of the sural nerve from the leg to the contralateral supratrochlear nerve in the forehead, which is then tunnelled under the skin of the nose and connected to the cornea.

At three months, most patients regain sensation to drops. At six months, nerves are visible in the cornea and sensation returns in about 12 months.

Clinical Associate Samarawickrama encouraged attendees with any patients they think may benefit from neurotisation to contact any of the surgeons involved.