Stacey & Stacey Optometrists, now under the ownership of The Optical Company (TOC), has celebrated 100 years servicing the local community of Townsville and the surrounding region. 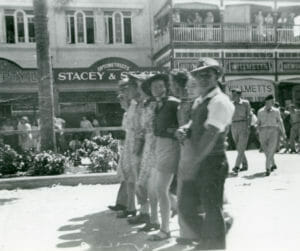 The Stacey & Stacey Optometrists brand has four practices in the region (Stockland and Willows shopping centres, Ayr and Charters Towers) and a unique history.

Originally established as a single store in Flinders Mall Townsville by the Stacey brothers in August 1919, the practice was bought by the Gibson family in 1930. The Gibsons supported the optical needs of the Australian defence force moving in and out of the region at the time, and the people of Townsville and surrounds.

Having established such strong associations with customers outside Townsville the Gibsons continued providing services to regions including Papua New Guinea, Thursday Island and local communities into the mid-20th century. They simultaneously expanded their offering through Queensland, opening new practices.

In 1994, Stacey & Stacey Optometrists was acquired by Margaret and Tony Buchan who sold the business to TOC in 2008.

Aaron Kangisser, Head of Commercial & Strategy at The Optical Company says the strong heritage of Stacey & Stacey Optometrists shapes the company today and contributes significantly to its success. Mr Kangisser, who has Bachelors of Commerce and Law, spent time in a commercial senior management role with the iconic UK organisation Boots Opticians (650 stores), before joining TOC ten years ago.

“At the heart of the organisation is our people who have been there for many years – they have local networks and connections. Our latest addition – Stacey & Stacey Optometrists in Ayr – is a great example of this. It’s a greenfield site an hour from Townsville, which has been incredibly successful. I recently visited the practice and I observed that every customer who came in received a hug from the store manager – she knew all the customers and their kids, and she had frames waiting for them to look at because she knew their tastes.”

With the heritage of brands like Stacey & Stacey Optometrists meaning so much in local communities, it’s hardly surprising that TOC, as the parent company, has chosen to balance its own branding in connection with the practices it owns. This has enabled the company to grow quietly and it now has 40 practices across the country, with many more in the pipeline.

“TOC was founded in 2006 as a vertically integrated optical group specialising in optometry services, retail and eyewear distribution,” explained Mr Kangisser. “Our retail model is about building independent brands – so we have a house of brands including Kevin Paisley Optometrists, nib Eye Care, Optical Warehouse and others which all fall within three specific tiers. We leverage and enhance with a back office that provides the equivalent support of any corporate in terms of governance, human resources, marketing, processes, systems and technologies.

“In a competitive environment, with changing consumer habits and high expectations for customer experience, price and speed of delivery, we equip these heritage brands to evolve their service, their clinical expertise, and success.

“Where we have found our sweet spot is that despite being centralised, we can be dynamic in the way we approach each brand within the group, in a way that’s relevant for their particular customers, with marketing, product choice etc.”

“In the case of Stacey & Stacey Optometrists, their legacy is providing the best and highest form of eye care and eyewear, and you can’t do that without investing, innovating, training and technology – so that’s how we’ve evolved the brand over the years.

“Last year we launched their new website and we’re about to refresh their logo and shop fronts.

“We have also introduced optical coherence tomography (OCT) with Stacey & Stacey at Charters Towers becoming the first practice in the region to be equipped.”

Mr Kangisser says TOC is now positioned for further expansion into both regional and metro areas of Australia. It recently launched its “Time for a Change” campaign and has invited expressions of interest.

“We are talking to a solid pipeline of practices but are determined to grow at our own pace by acquiring businesses with the metrics to suit our model and culture,” said Mr Kangisser.

He said when considering a practice for acquisition, TOC looks at the heritage of the business, the owner’s plans, the customer profile and other key financial metrics.

“We want a strong loyal customer base that values a high level of personalised optometry and high quality optical products. We are nimble and dynamic, and open to different ways of structuring an arrangement to suit the vendors and TOC.”

Optometry Against the Odds