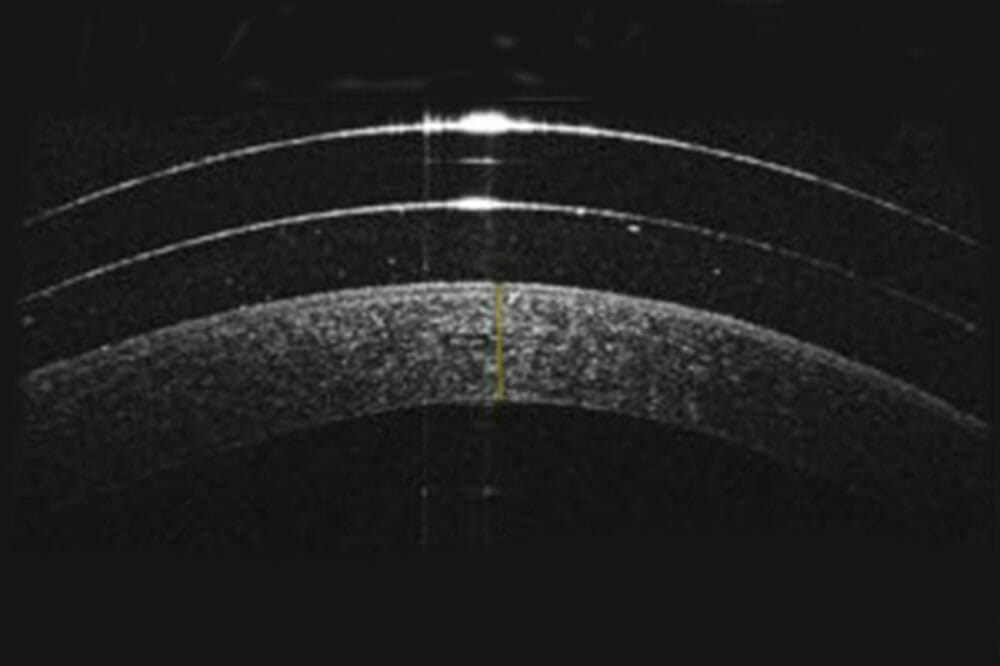 Contact lenses are the mainstay of treatment for keratoconus, however care should be taken as corneal insult on the apex can lead to progression and corneal scarring.

Mark first presented to the practice in January 2016, age 35. He suffers from advanced keratoconus R>L, which was diagnosed at age 27. Mark is also extremely atopic and suffers from chronic, severe eczema, hayfever, asthma, and allergy to animals. In the past he has struggled to tolerate rigid gas permeable (RGP) contact lenses due to issues with comfort.

Given his past failure with corneal RGP contact lenses, Mark was prescribed a pair of mini-scleral contact lenses. Upon delivery, contact lens acuities were R & L 6/7.5 and the lenses appeared well fitting, exhibiting complete corneal clearance (Figure 1). Mark found these lenses considerably more comfortable than corneal RGP lenses, and was able to wear them all day with no issues except for lens clouding after prolonged wear.

As a consequence of his chronic periocular atopic dermatitis, Mark has bilateral lower eyelid cicatricial ectropion, resulting in the punctum being opposed outwards with constant epiphora. Mark consciously tries to avoid eye rubbing, however he has episodes of extreme irritation where he is unable to prevent himself.

Once the fit was finalised, a six month review was scheduled, however the patient was lost to follow-up until December 2017, almost two years later. He had continued to wear the lenses full time, and was now experiencing some lens awareness in the right eye. Examination revealed progression of the keratoconus – with central corneal thickness reduced from 483 microns to 422 microns. The contact lens was now touching on the apex of the cone (Figure 2). Mark was encouraged to reorder his contact lenses but he found the cost too prohibitive at the time and was again lost to follow up despite attempts to contact him.

When Mark returned in November 2018, contact lens acuity had reduced to R 6/38 and L 6/18. The lenses were now nearly three years old and heavily deposited, and the right contact lens was bearing heavily on the cone (Figure 3). Central corneal thickness had dramatically reduced to 265 microns.

Mark was refit and at delivery of the new contact lenses, contact lens acuities were R 6/18 and L 6/7.5. The lenses appeared well fitting, showing complete corneal clearance. Unfortunately, now Mark’s right cornea was too thin for corneal crosslinking. The importance of avoiding eye rubbing and regular review were stressed.

Mark returned five months later, reporting that he felt he had rubbed a ‘blurry patch’ onto his right cornea two weeks prior. This foggy patch had been apparent with and without his contact lens, but had been improving. He had continued to wear his mini-scleral contact lens, and while worn experienced no discomfort, however reported discomfort when the lens was not worn.

Examination revealed marked corneal oedema and haze in the right eye (Figure 5), and the previously well-fitting right contact lens was now bearing on the corneal apex (Figure 6). AS-OCT showed a break in Descemet’s membrane measuring approximately 3100 microns (Figure 7), and significant corneal oedema and haze above the break. Central corneal thickness had increased to 650 microns. There was corneal epitheliopathy above the area of oedema. The epithelial disturbance resulted in discomfort, which Mark had inadvertently overcome by wearing his contact lens – the lens had acted as a bandage.

Mark was instructed to cease contact lens wear and review was arranged two weeks later. He returned two weeks later wearing his contact lens. There had been some improvement in the corneal oedema and the size of the break in Descemet’s had reduced to approximately 1500 microns as Descemet’s was beginning to reform (Figure 8). Contact lens acuity had improved to R 6/15. 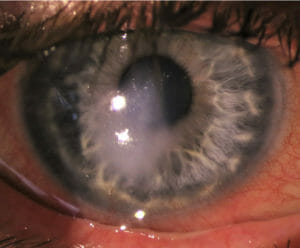 Corneal hydrops is the result of a break in Descemet’s membrane in the setting of corneal ectasias such as keratoconus, leading to an influx of aqueous humour into the corneal stroma, resulting in corneal oedema and haze.1,2

Symptoms vary depending on the extent of the tear and degree of resultant oedema. Fortunately, acute corneal hydrops is self-limiting and tends to resolve without treatment, in most cases over the course of three to four months as Descemet’s membrane reseals. The time for resolution is inversely proportional to the extent of the break in Descemet’s.1,2

Modern imaging instruments such as ASOCT in these cases are useful in quantifying the degree of the break and monitoring resolution as they can provide global pachymetry and visualisation of the cornea.2

Hydrops occurs in approximately 3% of patients with keratoconus, however has been reported as high as 11–12% in other corneal ectasias such as pellucid marginal degeneration and keratoglobus.1 Hydrops tends to be more common in males, and most frequently occurs in the second or third decade of life. A history of eye rubbing has been implicated as an important risk factor. Given the asymmetric nature of corneal ectasias, bilateral cases are rare.2

Fortunately, most cases of corneal hydrops spontaneously resolve with no treatment, and as such, traditionally, conservative management for corneal hydrops has been implemented. Therapy has been aimed at providing symptomatic relief, and includes topical lubrication for comfort and hypertonic saline eye drops to draw out fluid. If there is an epithelial break, prophylactic antibiotics may be prescribed and a bandage soft contact lens may be applied to reduce pain, however these may not drape over highly ectatic corneas, resulting in lens fluting. If secondary uveitis ensues, cycloplegic eye drops can be administered to reduce photophobia and pain. Topical steroids have been used to reduce inflammation, corneal neovascularisation and resultant corneal scarring, however their use is controversial as they may prolong the recovery time and lead to corneal perforation.1,2

Corneal perforation occurs in 3% of people who develop hydrops.1 Patients at risk of perforation should be monitored more closely and surgical intervention may be warranted.

In more recent years, surgical interventions have been described. These include intracameral injections of air or gas into the anterior chamber to mechanically close the opening in Descemet’s membrane and block further fluid entry into the cornea. Gases that have been used for treating retinal detachment include sulfur hexafluoride (SF6) and perfluoropropane (C3F8).3,4 Gases are used in preference to air as they last longer, providing a sustained tamponade of Decemet’s membrane, whereas air is absorbed much faster and subsequent injections are often required.

Intracameral injections have been shown to speed the resolution of the corneal oedema two to three times faster than conservative treatment, however there does not appear to be a difference in the end visual acuity between conservative and surgical management.3,4 Although faster resolution does enable the patient to return to contact lens wear sooner, injected gas into the anterior chamber can lead to secondary cataract in some patients, which is not ideal as many of these patients are young and accommodating. The risk of secondary cataract forming can be reduced by using miotics to constrict the pupil during surgery, however this in turn can lead to pupillary block. To overcome this issue, a peripheral iridectomy is performed at the same time. Ideally patients should remain supine for a few days following the injection for correct positioning of the gases, which may present a challenge for some patients.3,4

Once Descemet’s reforms, there will be a degree of resultant scarring. If the scar is large and through the visual axis, a corneal transplant may be required. However, best corrected contact lens acuities should be assessed prior to transplantation. The cornea will often end up flatter as a result of the hydrops, which may actually make contact lens fitting less challenging.1

A novel technique has been described, which involves Descemet’s membrane endothelial keratoplasty (DMEK) over the area of the tear in Descemet’s membrane. This has been shown to resolve persistent corneal hydrops with patients with larger defects or unresolving defects. However, this also requires air or gas into the anterior chamber and may lead to the same complications as intracameral injections. While only few cases have been reported in the literature thus far, the procedure seems promising as it has also been shown to hasten the recovery and may improve end visual acuity.5

Keratoconus typically stabilises by the patient’s late to mid-30s, however eye rubbing has been shown to promote progression. While contact lenses are the mainstay of treatment for keratoconus, care should be taken in the prescription and monitoring of patients wearing these lenses, as corneal insult on the apex has been shown to lead to progression and corneal scarring. Cases like Mark’s will often require a corneal transplant, which could have been avoided with more regular review and compliance.