Twenty Years as an Orthokeratologist

In the history of humankind, today is the best day to be alive and tomorrow will be even better.

In 2019 humans are living longer than ever before and rapid changes in health care are not only extending the length of our lives but also the quality. Take age-related macular degeneration (AMD) as an example. On 17 December 2004, Pegaptanib (Macugen) received approval by the US Food and Drug Administration (FDA) for the treatment of neovascular AMD, changing the prognosis of AMD forever. In 2000 the rate of legal blindness was 52.2 cases per year per 100,000 of the population over 50 years of age. By 2010 this rate had halved to 25.7.1 So today is the best time to get AMD and tomorrow will be even better.

Now, myopia management is at a critical point in its history; although instead of one major breakthrough like anti-VEGF, it has been a slow accretion of multiple treatments.

I became serious about myopia management in 1999. Prior to that, myopia correction was simply a matter of prescribing a stronger pair of glasses. Myopes were easy patients: nice quick tests, do a refraction, measure the intraocular pressure (IOP) and have a look into the eye. I didn’t give a thought to what was happening to the myopic eye as the prescription increased. 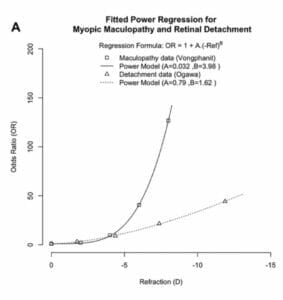 Figure 1. The odds ratio for myopic maculopathy and retinal detachment for the centroid values of the refraction ranges, quoted in the two studies from Vongphanit et al2 and Ogawa and Tanaka,3 plotted on a linear scale for the odds ratio.

One of my career defining moments was meeting Maria, a 51 year old lady whose prescription was a whopping -38.00D. Maria was coping reasonably well with her vision. I prescribed soft conventional lenses in a low Dk material (it was all that was available at the time) and she achieved a respectable 6/12 acuity in both eyes.

Yet Maria’s journey was one of heartache and loss. In 2006, she had a right macula hole and subsequent retinal detachment, which decreased the acuity in that eye to 2/60. Then in 2016, she developed maculoschisis in the left eye, which reduced vision to 6/19. Unfortunately, due to geographic atrophy, her acuity in the left eye is now 6/30. Maria can’t pass a driver’s licence test and is highly dependent on her husband for transport, who for three months of the year returns to Spain to visit family, leaving Maria alone and vulnerable.

Maria inspired me to find out more about how to reduce myopic pathology. Holden et al2 proposed that if myopia management treatment was commenced at the age of seven and if myopia progression was retarded by 50% it would result in about 90% fewer high myopes (5.00D or more). This would have a marked reduction on the risks of sight threatening complications in later life.

In 1999, I decided to implement an aggressive myopia management strategy. It might sound strange but I’m very proud of the fact that today in my practice, I don’t have a patient under the age of 30 whose prescription is greater than -10.00D. And this is not because I don’t see high myopes – I have a number of patients over the age of 30, who like Maria, have prescriptions greater than -10.00D.

So, what do we do with a child with rapidly progressing high myopia? I was faced with such a patient in 2012 when Samantha entered my practice for the first time as a 12 year old. Already, her myopia was -8.00D in the right eye and, according to her parents, she was progressing close to two dioptres per year.

In 2012 the options were limited. Orthokeratology (OK) lenses struggled to correct up to -5.00D, Misight lenses were only just being trialled by a select few optometrists and they stopped at -6.00D, and the effects of low dose atropine were only released in the ATOM-2 study in mid-2012.

Little did we know, but Samantha was at the vanguard of myopia management. I recommended we trial Misight lenses and wear over specs, but at that stage I didn’t know whether that would be an effective way to slow myopia. Samantha’s mum was keen to trial OK, which was why a friend had referred her to my practice in the first place.

The first rule of fitting contact lenses is under–promise and over deliver and that was particularly important in this case. In April 2012, I fitted Samantha with BE lenses from Capricornia. By the end of May, her results were quite good with her post OK refraction at -3.00D. After 12 months it had improved to -1.50D on a good day. Samantha wore post OK specs. Although I was certain that the spectacles would somehow negate the effects of OK, Charm and Cho’s study in 20137 found that axial length elongation was 63% slower in partial reduction OK treated children, compared with children wearing spectacles. In 2014, I re-fitted her with GOV lenses, which offered increased corneal compression at the alignment curve. Amazingly her un-aided vision improved to R. 6/4.8- and L. 6/6+.

In 2015, I performed a routine dilation and found an asymptomatic retinal hole superior-temporally in Samantha’s left eye, which was treated with laser retinopexy by a paediatric ophthalmologist, who wasn’t on board with OK but didn’t try to talk her out of wearing lenses. This attitude was something we always had to battle in the early years – negative publicity or sentiment, the run of pseudomonas aeruginosa and acanthamoeba infections in East Asia, namely Taiwan, Hong Kong and Mainland China in the early 2000’s gave OK a bad name. Subsequent reviews8–12 attributed the causes to lack of training of practitioners and wearers, improper fitting procedures, poor compliance to lens care regimens, and patients being lost to routine follow-ups. To counter these concerns, as a practitioner I made sure I reinforced gold standard lens care with regular follow-ups – every child was checked every six months.

Fighting negative sentiment was always difficult in those early days of OK. I frequently had discussions with parents in an effort to allay their fears about this modality, but it wasn’t just the opinions of well-meaning uneducated friends and family members we were trying to change – we were also fighting against other optometrists who didn’t fit OK and were territorially protecting their spectacle based mode of practice.

Ophthalmology was also reluctant to embrace OK, perhaps more understandably. They only see the worst aspects of contact lenses, and it would take just one vision reducing corneal infection in a child to put them off contact lenses for life. A referral to an unsympathetic ophthalmologist meant you ran the risk of the patient being told to stop wearing the lenses. Indeed, one of my first ever OK wearers later became an orthoptist. We fitted Lexie when she was 15, and after the completion of her degree she went on to work for a refractive surgeon who told her that he thought OK was bad for the health of the cornea. This was ironic considering he cut into corneas for a living.

In 2017, I re-fitted Samantha with Forge lenses and to this day, she retains 6/6 unaided acuity and she’s never had an eye infection.

The greatest aspect of myopia management is that we’re seeing children like Samantha regularly – since 2012, I’ve seen her 33 times. And, rather than giving them stronger glasses and reviewing them every two years, we’re seeing these kids for checks every six or 12 months. In that time we’re able to diagnose and treat conditions such as retinal holes before they ever have a chance to become a problem.

Success with myopia management comes when the patient takes responsibility for their eye health, which generally starts the moment I sit the parent and child down…

Success with myopia management comes when the patient takes responsibility for their eye health, which generally starts the moment I sit the parent and child down and relay their lifetime risk of eye disease. I wish I could go back in time and help Maria as I did Samantha, and I wish someone had recommended myopia control options to Samantha before she reached -8.00D. A lot of my patients’ parents lament that they didn’t bring their children in earlier.

The myopia revolution will occur, one practitioner and one patient at a time. But like any good old revolution, we need more and more people to join the cause. 1999 was my watershed year; what will yours be?

Regardless, rest assured 2019 is the best time to be myopic and tomorrow will be even better.

Mark Koszek B.Optom, M.Optom, Grad Cert Oc.Ther graduated from the University of New South Wales in 1996, completed his Master of Optometry in 2002 and his Graduate Certificate of Ocular Therapeutics in 2012. Mr Koszek is a founding partner and the Professional Education Officer of EyeQ Optometrists which has 25 practices Australia wide. Mark Koszek is a former councilor for the Optometry Association of Australia (NSW division) and is on the board of the Cornea and Contact Lens Society of New South Wales. He was a fourth year clinic supervisor between 2002 and 2015 and has lectured extensively throughout Australia, New Zealand and Asia on contact lenses, dry eye and ocular diseases. Mark Koszek has a special interest in contact lenses, orthokeratology, dry eye, ocular diseases and behavioural optometry.

Committed to A Path of Lifelong Learning