With kids heading back to school, we can expect to see more young patients in consulting rooms with signs and symptoms of myopia. So what’s your strategy?

I trust you had a good break, are enjoying the summer, and looking forward to the challenges of 2020 and providing amazing service to your patients.

I’m sure you read mivision’s myopia edition (December 2019) and have mulled over the many issues raised.

Myopia control, and indeed prevention, were always of interest to me. I managed it largely with vision therapy and specialised spectacle prescribing. I was fortunate to have great teachers. The respected Selwyn Super was one mentor who instilled in me the importance of functional optometry and child vision care.

On careful questioning, some also complained of near-to-far blur after prolonged close work 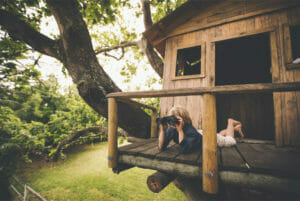 Although spectacles don’t cause myopia, we do seem to have evidence that standard spectacle or contact lens designs are associated with its progression. Hindsight is an interesting thing. It saddens me to note that a few optometrists – who espoused the fact that spectacle correction of myopes was likely making things worse – were ostracised by their profession and regarded as heretics. There’s at least one such wellknown case in Australia.

So, the question is why do people become myopic before they start with spectacles?

Apart from an inherited predisposition (myopic parents or relatives), near visual stress has been cited as one of the causes of myopia, as have related accommodativeconvergence disorders. Reduced time outdoors, increasing near work and close working distances associated with smartphones are others.

Vision therapy is like gym membership. Having the tools or membership card is not the same as actually doing it

When I was young, kids climbed trees, rode their bikes and generally spent time outdoors. By the time I was in optometry school, I noted that children were becoming couch potatoes and playing TV games. This led to, among other things, Kraus-Weber gross-hypotonia/finehypertonia syndrome, associated esophoria and to some degree fidgeting, attention deficit hyperactivity disorder (ADHD) and related learning problems.

Over time I noted low-hyperopes moved toward emmetropia, and then into myopia. I also noted many of these individuals would see me with the initial complaint of a variable reduction in distance vision when in the classroom or watching TV. On careful questioning, some also complained of near-to-far blur after prolonged close work.

As part of my routine, I always measured binocular cross-cyls at near, PRA and NRA (positive and negative relative accommodation), amplitude, dissociated phorias and AC:A ratio. I also analysed retinal slip/associated phorias, using polarised and anaglyphic techniques, and observed the reaction to plus at near – or occasionally very small (micro) prisms. I would, however, usually try and ‘fix’ these issues with vision therapy. Observing the lag of accommodation, via MEM retinoscopy, was also useful.

The Brock Posture Board is a fantastic tool – especially for convincing sceptical parents – who are amazed when the red light shoots off from central fixation. We can then demonstrate how the application of lenses will normalise this.

From testing tens of thousands of people over many years, it was easy for me to see when things were out of whack. In many of the aforementioned cases, it was clear that accommodative flexibility and facility were part of the problem. Plus/minus flippers became one of my main tools for demonstrating and treating the problem. I would ideally prescribe +2.00D/-2.00D flippers, with clear instructions for homebased vision therapy.

Vision therapy is like gym membership. Having the tools or membership card is not the same as actually doing it. I would use this analogy with my patients and their parents. Mostly the message got through. Then I’d book a follow up appointment after four to six weeks and review the findings. They would usually return saying that their near-to-far blur issues had resolved, that they could see the board more clearly and that their asthenopia had resolved. I’d prescribe some plus at near, ideally in the form of a degressive-style occupational lens.

As a result, we’d have non-myopic, happy, functional patients.

This myopia prevention strategy would usually only work in very low myopes at the beginning of progression, when myopia is in the functional stage related to accommodative issues; typically, as soon as I saw minus projection or low minus in the order of -0.25D to -0.75D.

In my opinion, when the myopia has been around for ‘too long’ and is moving beyond -0.75D, we start to see structural change. By then vision therapy is unlikely to reverse it, and it’s time to implement one or more methods of modern myopia control.

With all of this in mind, my question is: shouldn’t we be doing more myopia prevention and research to validate interventions such as those I’ve mentioned?

Women in Optometry: Future of a Profession