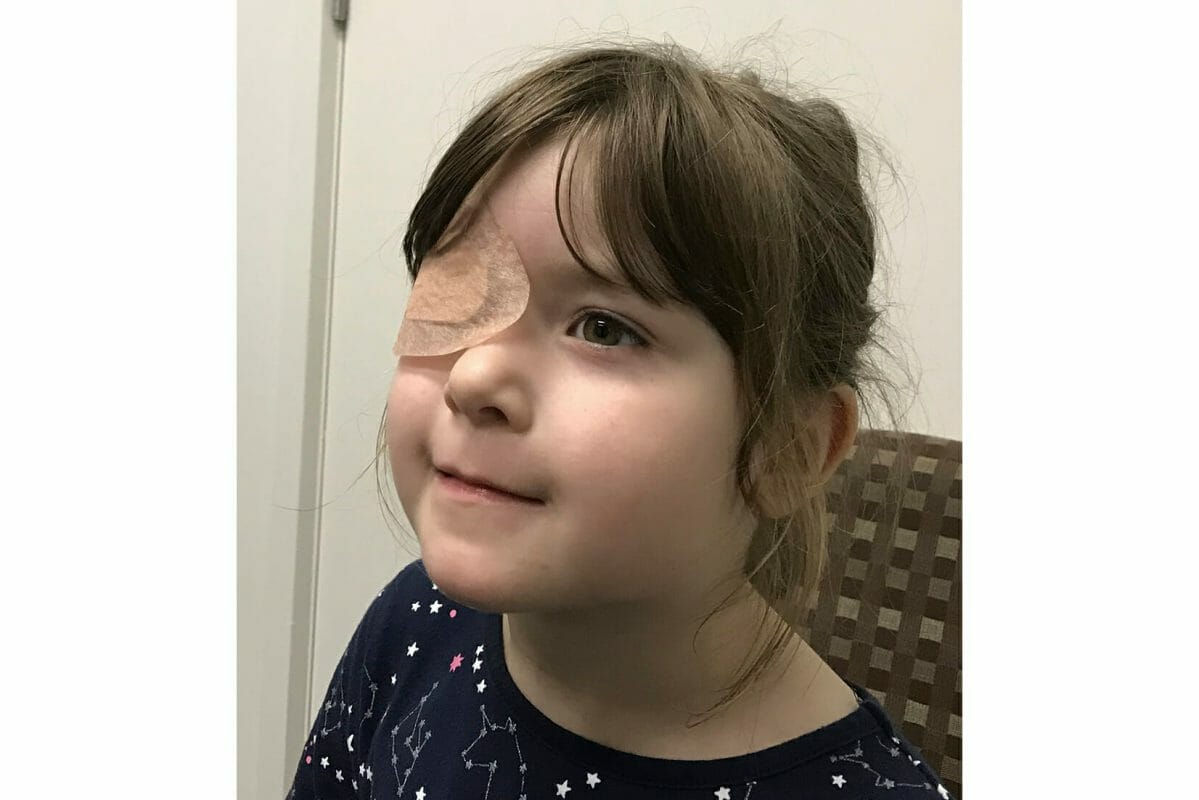 There is no doubt that a co-managed approach to paediatric eye care, involving optometrists and ophthalmologists, is the best way to achieve early intervention and bring about the most promising results.

This is a rewarding sentiment for our patients, as well as us, as their eye care professionals. 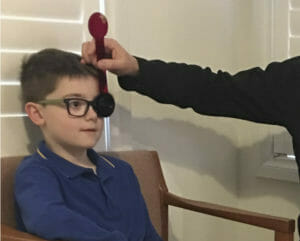 Figure 1b. On removal of patch immediately measure size of deviation using prism.

In this article we will discuss a cluster of cases using a collaborative care model, supported by current level evidence to address questions regarding paediatric care, and the answers optometrists are seeking.

While the cases themselves are commonly occurring, they all highlight the need to ask three important questions during patient management:

Let’s begin with Alice, a six year-old presenting with a distance exotropia, that her parents had noted on occasion but was becoming more frequent. At initial presentation to her optometrists, the following results were obtained:

An exophoria, quickly breaking to exotropia was noted.

Measurement of the deviation using a prism cover test with base in (BI) prism was:

The questions that prompted, Alice’s referral from optometrist to ophthalmologist weres:

A decompensating exophoria is a common occurrence in the paediatric population. On most occasions, a visit to the optometrist or ophthalmologist is prompted as parents or family members have noted intermittent turning out of one or both eyes, usually around school age.

Several grading systems exist to measure decompensation – a common one used is the revised Newcastle Control score (Table 1). This can help determine clinical severity. In general, exotropia that is poorly controlled is classified by the grading system as ‘severe’ and more likely to require surgical intervention.1

In Alice’s case, the salient features were :

The small size of deviation (<20PD); the fact that Alice was able to re-fixate within blink (exhibiting good control), had good stereopsis and maintained close to equal visual acuity.

Alice was prescribed minus lenses to control her exotropia when she was subsequently seen at optometric follow up. This management is really only appropriate for small angle, intermittent exotropias, providing vision is not compromised. It requires regular follow up.2

On occasion, an intermittent exo deviation may look larger. This is frequently reported by parents but is not always visible during an eye examination. In some instances, ophthalmologists will employ the use of a prolonged occlusion (a 45 minute patch test) referred to as an occlusion of Marlowe (Figures 1a and b). This may help determine the largest possible magnitude of the exo deviation, which can be helpful in surgical planning.

Ben is a four year-old boy who presented with a partially accommodative esotropia. His parents had noted that over eight months, his initially intermittent esotropia had broken down and become a constant esotropia.3 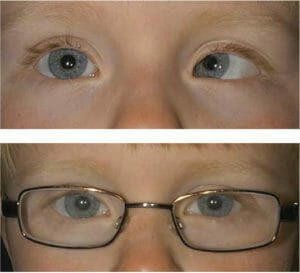 Figure 2a & b. Partially accommodative esotropia with AC/A corrected with single vision lenses.

The rest of the ocular examination was unremarkable.

In general, a high AC/A ratio is often the cause of an esotropia greater at near than at distance. Originally, bifocals alone were reserved to treat this condition – in fact an executive bifocal would allow control of the deviation at near without causing visual blur at distance.4

However, in today’s world, an executive type bifocal is hard to come by and a D-segment bifocal may not work as effectively. In these instances, I often prefer to use a standard single vision lens to treat the esotropia in the distance and partially correct the esotropia at near (Figure 2). This strategy results in a residual deviation at near, which is cosmetically acceptable – as many will argue, there is really no harm in having a small angle esotropia (< 20PD) at very close range, (i.e. 45cm), which is essentially reading distance.

Deciding when to stop treating for amblyopia can be a challenge, even among eye care professionals. Let’s attempt to set the record straight. Amblyogenic mechanisms may have an impact on vision during the critical period of eye development defined as early development (a child’s first nine to 12 weeks) and then during later development (six to eight years of age). The physiology behind this is believed to be attributed to the development of cortical ocular dominance columns and visual preference.5

Xenia presented to her local optometrist at age seven.

The rest of the ocular examination was unremarkable and importantly, there was no evidence of strabismus. 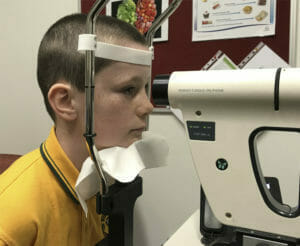 Figure 3a. Taking a retinal photograph of suspicious pathology in the posterior pole.

Xenia was started on atropine penalisation (weekend atropine), co-managed every two months. Over the next two to six months her vision improved gradually in the left eye, from 6/60 to 6/18 and is currently maintained at 6/9. Xenia is a classic example of how well children with amblyopia, previously naive to amblyopia management, can still achieve improvements in their vision providing the appropriate amblyopia management regimen is chosen for them and they are closely followed.

The PEDIG studies for amblyopia management are still the gold standard. Occlusive patching for two to four hours was found to be as effective as full day patching (six to eight hours) depending on the age of the child. Occlusive patches were equally effective as atropine weekly in cases of moderate amblyopia. In cases of severe amblyopia, no such study comparing patching to atropine exists but it could be extrapolated that using atropine penalisation for a longer period may be beneficial in these cases. However, there are risks in doing so, and therefore this is rarely employed in amblyopia management.6

The underlying challenge in amblyopia management is essentially compliance. The use of a reward based system and a clear understanding of the aims of penalisation therapy needs to be discussed in depth with parents first. Further PEDIG studies of amblyopia management in older children, 12 years of age, revealed that those children who had been previously naive to treatment may show some, albeit a slower, though sustained response. The message here – don’t give up on your older patients!

An often overlooked component of the clinical exam is a careful look at the posterior pole post dilation. In children, while this can often be a challenge, a paediatric eye examination is not complete without it. In fact many cases diagnosed as ‘amblyopia’ may be due to subtle pathology in the posterior pole.

The following three cases are an example of this and highlight the need to pay particular attention to atypical appearances in the macula. 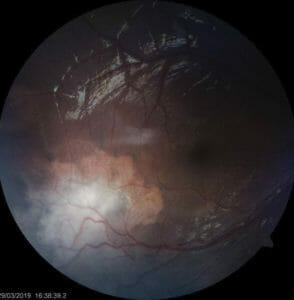 Figure 3b. Congenital harmartoma of retina and retinal pigment epithelium (RPE) in the right eye.

Congenital Harmatoma of Retina and RPE

Congenital harmatoma of retina is a rare condition that has three clinical signs, which may be atypical in their appearance – epiretinal fibrosis, gliosis, and retinal pigment epithelium (RPE) hyperpigmentation in the paramacula region. It is often unilateral and non-progressive and impacts vision depending on location. In some instances there have been reported cases of this pathology co-existing with NF27 (Figure 3).

This case (Figure 4) was originally referred as a suspected Best’s vitelliform dystrophy given the vitelli-ruptive type appearance of lesions. Although an atypical appearance, vitelliform lesions are well circumscribed and are likely to cause significant decrease in vision, often to worse than 6/12 (LogMar chart). This child’s vision was still within normal range (6/7.5 using LogMar chart) and a careful history later confirmed the diagnosis.

Though Figure 5 was a suspected case, it demonstrates the importance of not missing a diagnosis. Deterioration in vision due to Stargardt’s Disease does not occur until after a child has commenced school, usually towards eight to 10 years, again highlighting the need for close follow up with further investigations. Angiography and electrophysiology are often warranted. 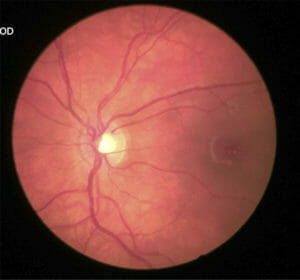 Figure 4. A case of laser pointer injury to macula.

THE ELEPHANT IN THE ROOM

Myopia is fast becoming a real concern for many parents with school aged children. Most childhood myopia has been dubbed ‘school myopia’ if it occurs before 15 years of age.

Most patients will present to their optometrist first, accompanied by several questions related to possible prevention treatments – atropine being the most popular at present. A co-managed approach is therefore essential in the follow up of these children.

The question that first needs to be addressed is, what is the child’s risk of their myopia progressing? The major factor contributing to faster childhood myopia progression is younger age at onset. In March 2012, the Association for Research in Vision and Ophthalmology (ARVO) released a summary abstract suggesting that this risk factor was independent of sex, ethnicity, school, time spent reading, and parental myopia.

Lower hyperopia than age-normal can also indicate risk of myopia development. In an ethnically diverse, US-based study that included more than 4,500 children, first grade (age six) children measuring +0.75 diopters (D) or less by cycloplegic refraction had increased risk of becoming myopic between second and eighth grades (ages eight to 14 years) compared with those with +0.75 D or greater refraction, with the risk of myopia increasing with the number of myopic parents. 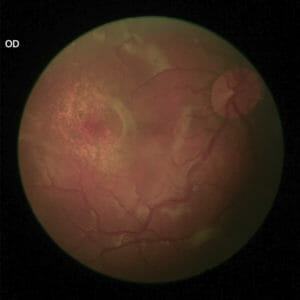 Herein lies the discussion that many parents wish to have with their treating clinician – how can myopia progression be slowed? Many paediatric ophthalmologists have embraced treatment with low dose atropine in an attempt to reduce myopic progression in children who may be at high risk and demonstrate an increase in myopia over a 12 month period. Much of this follows the promising evidence from the ATOM 1 and 2 studies which concluded that over five years, atropine 0.01% eye drops were more effective in slowing myopia progression with less visual side effects compared with higher doses of atropine.8

Co-management in these cases would ideally involve an assessment by both optometrist and ophthalmologist to establish risk factors, possible intervention such as low dose atropine and a careful follow up plan, which would ideally involve vision, refraction, measurement of axial length using biometry, often on a six monthly basis.

Co-management is essentially the way forward in managing paediatric cases.

In order to achieve this, a clear referral pathway needs to be established. Such a pathway begins with the knowledge to appropriately triage a patient. Discussions that need to be had with parents may include: a medical versus a surgical management plan, establishing a follow up plan between both optometry and ophthalmology, and offering parents an avenue to discuss their concerns with both professionals. It is imperative that in managing paediatric patients we adopt an evidenced based model to guide our decision making process. The cases presented in this article highlight this as an important factor.

Embracing the above will undoubtedly ensure the treatment we offer our patients will result in optimal visual outcomes.

Dr Christolyn Raj is a Melbourne based ophthalmologist with a special interest in paediatric eye disease. She is a consultant at The Royal Children’s Hospital and VMO at Mercy Hospital for Women.

Catherine Vallence is an optometrist based in Western Victoria with a special interest in evidence based paediatric eye care. She is experienced in co-management of amblyopia and other paediatric conditions with Melbourne based ophthalmologists.

Jeremy Vallence is an optometrist based in Western Victoria with a special interest in evidence based paediatric eye care. He has experience in co-management of amblyopia and other paediatric conditions with Melbourne based ophthalmologists.