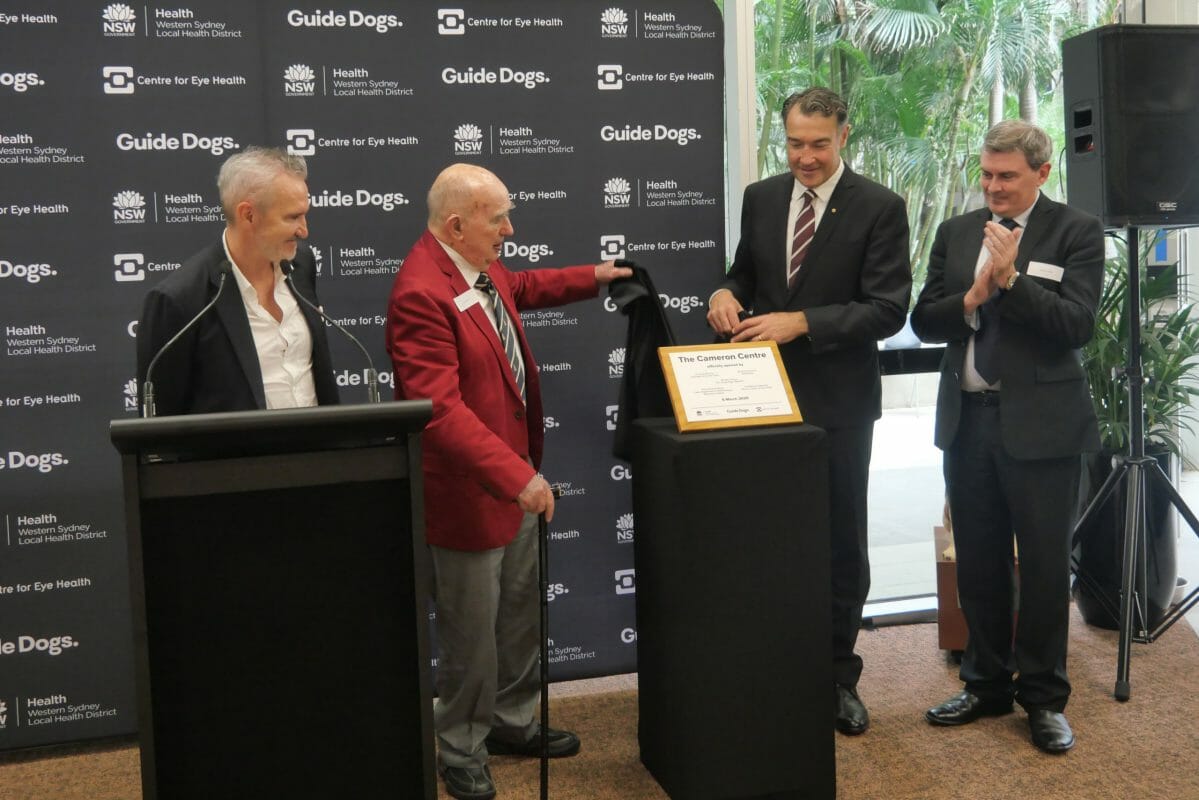 Guide Dogs NSW/ACT, the Centre for Eye Health, and strategic partner Westmead Hospital have opened a new facility in Parramatta to offer eye health and low vision services to the Western Sydney community.

The Cameron Centre will take a three-phased approach to proactively support people through every stage of their eye health journey, including:

The new centre will follow the model introduced by Guide Dogs NSW/ACT in 2009 when the Centre For Eye Health (CFEH), a joint initiative with the University of NSW, was first established.

In the past 10 years, Dale Cleaver, CEO of Guide Dogs NSW/ACT, said CFEH has serviced over 65,000 appointments with more than 34,300 people receiving community-based care. In doing so, it has prevented unnecessary referrals to hospital-based ophthalmology services and alleviated pressure on an overburdened public health system. By working closely with the Prince of Wales Hospital Ophthalmology Department, for example, the centre has helped reduce the hospital’s wait times from 20 months to one month.

It’s thrilling to see this collaborative effort… It’s going to be a model for the rest of Australia, and the largest centre of its type outside the National Health Service in the United Kingdom

Mr Cleaver said the new Cameron Centre will benefit the Western Sydney community, “which has demonstrated a need for better and more efficient eye health services.

Glaucoma is also a common condition among residents, with an estimated prevalence of between up to 4% nationally, equivalent to 14,000 people in Western Sydney. 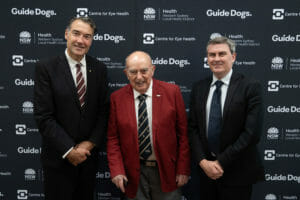 “This benefit has been amplified by an exciting new strategic partnership between the Centre for Eye Health and Westmead Hospital that will see the Centre work within Westmead’s Community Eye Care model to deliver collaborative care for people with low-risk glaucoma and diabetic retinopathy,” he added.

Westmead Hospital’s Community Eye Care model (C-EYE-C) of care was first introduced as a pilot with support from the NSW Agency for Clinical Innovation in 2017, and is driven by partnerships with community-based optometrists.

Professor Andrew White from the Hospital’s Westmead Eye Clinic said during the pilot, hospital appointments for low-risk patients were reduced by 57% for glaucoma and 69% for diabetic retinopathy.

“This is the first time we have seen ophthalmologists and optometrists work together and it has not only streamlined waiting lists, but reduced health system costs by 22% for glaucoma care and 43% for diabetic retinopathy care,” Professor White said.

“The opening of the Cameron Centre will allow us to work with the Centre for Eye Health to provide earlier access to eye care for those in need, while reducing wait times for more complex patients at hospital clinics,” he added.

Dr James Muecke AM, current Australian of the Year and co-founder of Sight For All was the invited special guest speaker for the Cameron Centre opening. Addressing the audience he said the new is “superbly placed” to support the high number of people living with diabetes in Western Sydney, which has twice the level of diabetes compared to the rest of the country.

“It’s thrilling to see this collaborative effort… It’s going to be a model for the rest of Australia, and the largest centre of its type outside the National Health Service in the United Kingdom,” he observed.

The centre has been named in honour of Doug and Elaine Cameron and their family. Mr Cameron, who is the major benefactor, was instrumental in establishing Guide Dogs NSW/ACT 63 years ago. He was made an honorary life member in 2011 in acknowledgement of his continued participation in the Guide Dogs movement and assisting to establish Guide Dogs Centres in other states.

Addressing the audience at the launch, Mr Cameron said the Centre would become the new home for Guide Dogs staff who were previously based out of the Blacktown office.

“These staff will continue to provide services to people in Western Sydney with low vision or blindness – our ‘traditional’ services, so to speak, that we are best known for. This includes orientation and mobility, assistive technology, occupational therapy, and of course Guide Dogs. We’re also offering new ‘Connection Services’ that connect clients to each other through peer support, or to their community,” he said.

University of Western Australia to Offer Doctor of Optometry Degree