Damien, a 60 year old male, presented complaining of reduced and cloudy vision in his left eye beginning one week prior. He reported no other problems with his eyes. He had previously been on hypertensive medication, however ceased two years ago as he felt his blood pressure had been fine. He had not attended any medical appointments since.

The prognosis of CRVO varies, but the strongest predictor for final visual acuity outcomes is baseline visual acuity 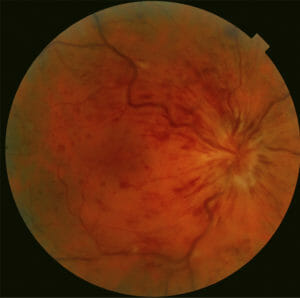 Anterior eye examination revealed no abnormalities, however mydriatic fundus examination revealed venous and arteriolar dilation and tortuosity and many retinal haemorrhages in both superficial and deep retinal layers throughout all four quadrants of the retina, optic nerve head and macula oedema. The left eye was unremarkable. At the last visit, all findings had been unremarkable. Fundus photography revealed the stark contrast between this visit (Figure 1) and prior visit (Figure 2). Optical coherence tomography (OCT) of the macula revealed significant macula oedema. (Figure 3).

Damien was diagnosed with central retinal vein occlusion (CRVO), which was suspected to be ischemic. He was referred to a retinal specialist and advised to return to his general practitioner (GP) to have his blood pressure, cholesterol and blood sugar levels measured and optimised.

His GP found blood pressure of 160/90, and hypertensive medication was initiated.

His retinal specialist planned to administer anti-VEGF treatment to treat macula oedema, however at his injection appointment, his visual acuity had spontaneously recovered to R 6/6. OCT of the macula revealed almost complete resolution of the macular oedema (Figure 4). Collateral blood vessels were now observed at the optic disc.

Damien was further monitored closely at two weekly intervals to measure IOP due to the risk of neovascularisation of the iris and angle, which fortunately didn’t ensue in Damien, and by four months the macula oedema had almost completely resolved (Figure 5). Figure 2. Fundus photography at the patient’s prior visit.

Central retinal vein occlusion, (CRVO) is the second most common cause of visual loss from retinal vascular disease after diabetic retinopathy. The prevalence ranges from 0.1% to 0.5% of the older population.1,2

The most commonly cited risk factors for CRVO are hypertension and increasing age. Other associations include obesity, hyperlipidemia, smoking, artherosclerotic vascular disease, diabetes, a history of a retinal vein occlusion in the same or fellow eye, and elevated intraocular pressure (IOP)and glaucoma. There does not appear to be any difference in incidence between genders.1,3 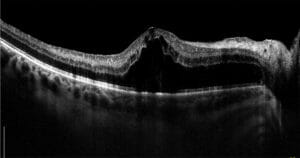 CRVO should be distinguished from branch retinal vein occlusion (BRVO), which results in localised retinal oedema and haemorrhages, intraretinal microvascular abnormalities and venous dilation within a sector of the retina corresponding to the obstructed vein, as opposed to all four quadrants as seen in CRVO.

CRVO can be further subclassified as ischaemic or non-ischaemic, with ischaemic accounting for approximately 20% of cases and being the more severe form, resulting in greater visual loss.1,3,4 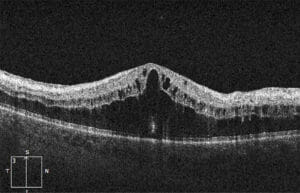 Figure 4. OCT of the macula revealing almost
complete resolution of the macular oedema,
however there was still neurosensory detachment.

Non-ischaemic cases tend to present with milder vision loss and result in much better visual prognosis. Relative afferent papillary defects (RAPD) are rare or mild. Approximately one third of non-ischemic CRVO eyes will convert to ischemic CRVO over a three year period, with the most rapid conversion to ischaemia occurring in the first four months.1,4 Ischaemic cases present with more profound vision loss and can lead to more severe complications. Ocular signs are more pronounced – i.e. more significant tortuosity and engorgement of the branches of the central retinal vein, extensive dot-blot and flame-shaped haemorrhages, cotton wool spots, macula oedema and severe optic disc oedema and hyperaemia. There is normally a marked RAPD. The prognosis is extremely poor, and can result in vitreous haemorrhage, macular degeneration and optic atrophy.

The most serious complication of CRVO is neovascular glaucoma (NVG) as it has severe visual complications and can result in a blind eye. In CRVO, the hypoxic retina may produce vasoproliferative growth factors (VEGF) in an attempt to revascularise hypoxic areas. The VEGF may diffuse into the anterior segment and initiate neovascularisation of the iris and angle, impairing aqueous outflow, leading to NVG. NVG is rare in non-ischaemic eyes, but develops in approximately one quarter of ischaemic eyes,1,5 and normally occurs between two to four months, and hence is termed ninety day glaucoma.5

Treatment for NVG involves reducing posterior segment ischaemia and subsequent VEGF release. Panretinal photocoagulation has been the mainstay in controlling the neovascular drive, but in recent years anti-VEGF agents have been extensively investigated to manage NVG. Injections of anti-VEGF agents have been shown to cause a regression of iris and angle neovascularisation, however the effects thus far appear to be temporary and requiring frequent treatments and careful monitoring. 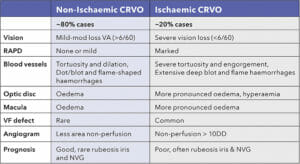 In non-ischaemic cases of CRVO, vision may return to normal or near normal in some cases, however will be reduced in those suffering from chronic cystoid macula oedema resulting in secondary retinal pigment epithelial changes. Non-ischaemic cases need to be monitored closely for conversion to ischaemia.

Ischaemic CRVO patients must be monitored very closely to monitor for anterior segment neovascularisation, with careful observation of the iris and angle with gonioscopy and IOP measurements.

The fundus signs for both ischaemia and non-ischaemia may appear very similar, as was the case for Damien. The level of his vision, presence of a RAPD, extent of his haemorrhages and oedema of his macula and optic disc led to a provisional diagnosis of ischaemic CRVO, however fortunately for him, further work-up revealed his case to be non-ischaemic. Damien was lucky to have his vision resolve to normal, which largely would have been to his compensatory vascular response, quickly forming collaterals due to his relatively young age and otherwise reasonable health.

Thanks to Dr Christolyn Raj for assistance with this article and providing Figures 4 and 5.