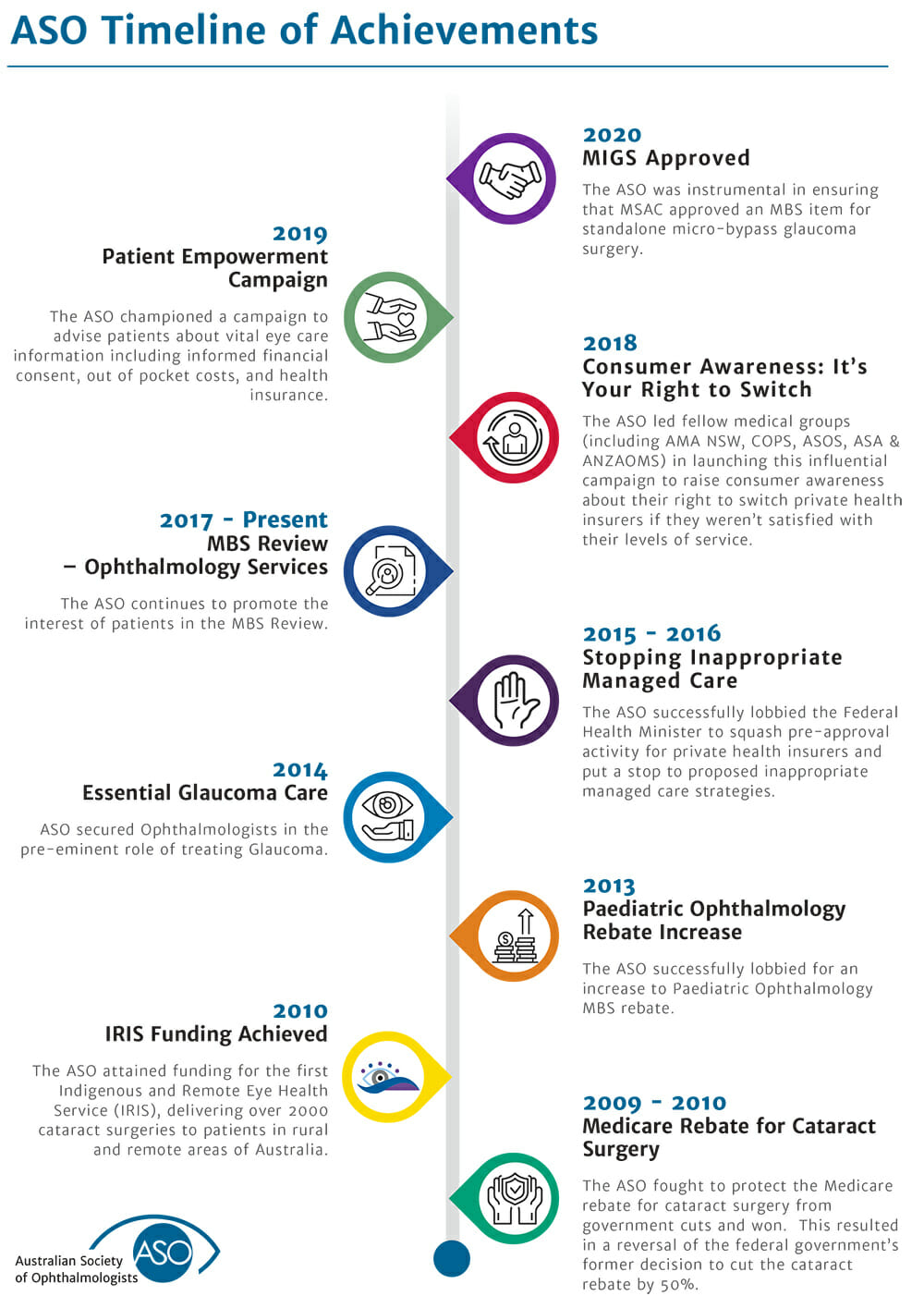 This year, ASO celebrates over 35 years of advocacy to protect excellence in the delivery of ophthalmology care and maintain equitable services for all Australians.

The organisation – which sat virtually dormant in a surgeon’s bottom drawer for nearly 25 years – is now one of Australia’s most prominent medico-political forces.

…the ASO and ION continued to work together, hand-in-glove…

ESTABLISHMENT OF A NATIONAL ORGANISATION

The national Society grew its membership base over the ensuing years, however, because it was not an official academic body, it was unable to conduct examinations for the certification of ophthalmology. Hence on 30 May 1969, the Ophthalmological Society of Australia formally disbanded and re-formed as the Australian College of Ophthalmologists, later becoming RANZCO. The College continued the work of the former Society, while also assuming responsibility for the regulation and assessment of training and certification.

FORMATION OF A MEDICO-POLITICAL BODY

In 1984, a storm began to brew for what would eventually become the NSW specialist doctors’ strike. This strike saw mass resignations of specialists from the public health system, causing the government to enact emergency legislation to nullify further resignations. Additionally, specialists who had resigned were banned from practice for the next seven years. The urgent need for a specialist ophthalmic medico-political advocacy group became apparent and in 1984 the Australian Society of Ophthalmologists took decisive action, with Dr Peter Pickering as the first president. The medico-political interests of ophthalmologists throughout Australia were now well protected.

For several years following resolution of the strike, the medico-political landscape remained relatively quiet. Then, during the presidency of Dr Allan Rosenberg from 1995 to 2004, a number of controversial issues arose. These led to enormous wins which remain in place today. The first was the proposed ‘Lawrence Legislation’, which would have forced doctors to charge for procedures only via private health funds. This would have given health funds control over fees charged. The ASO lobbied hard against the Lawrence Legislation, and successfully negotiated gap cover schemes which were eventually legislated in 2000. These allowed doctors the freedom to choose how to bill patients for their procedures, whether direct to the patient, via the health fund plus a known gap, or direct with no gap to the health fund.

The ASO’s second major achievement during this era was to thwart attempts to introduce US style managed care funds (such as Kayser Permanente) to Australia.

As the years progressed and the medicopolitical landscape became less demanding, the ASO became somewhat of a dormant body. However, the decision by the 2009 Rudd Federal Government to reduce the Medicare rebate for cataract surgery from AU$623.70 to $307.20 changed all that, galvanising the ASO into action again. The proposed reduction in the Medicare rebate for cataract surgery, of more than 50%, was eventually overturned by the ASO, with support from the advocacy group Independent Ophthalmologists Network (ION).

Having achieved this success, the ASO and ION continued to work together, hand-inglove, largely sharing an executive committee. Eventually the two organisations formally merged, with ASO also assuming ION’s role in protecting independent practices against the threat of large-scale corporatisation via business education.

The merger of these two organisations determined the shape of the ASO as it is today, a political voice for ophthalmologists practising in Australia which works to protect excellence in the delivery of ophthalmology care and maintain equitable ophthalmology services for all Australians.

Each year the ASO holds its Business Skills EXPO, and provides many other member services. It continues to take a proactive role in lobbying individuals and organisations involved in policy and decision making… and it continues to be successful.

To find out more about ASO, visit aso.org.au.