The Hon Christopher Pyne has been elected Chair of Vision 2020 Australia, the national organisation committed to preventing avoidable blindness and improving outcomes for people who are living with vision loss. Mr Pyne succeeds his former Parliamentary colleague The Hon Amanda Vanstone AO, whose six-year tenure as Chair recently concluded. 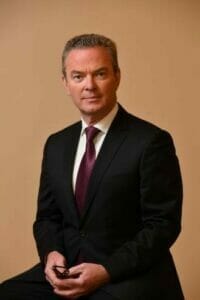 Judith Abbott, CEO of Vision 2020 Australia said her organisation is “incredibly fortunate” to have Mr Christopher Pyne leading the Board.

Having led reforms across the Ageing, Education, Industry Innovation and Science, Defence Industry and Defence portfolios during his 26 -year parliamentary career, Mr Pyne will bring a wealth of knowledge, experience and networks to the role.

Since his retirement from politics, Mr Pyne has combined roles as Chairman of Pyne and Partners and a Professor in the UniSA Business School with other appointments, including directorship of the International Centre for Democratic Partnerships as well as its Foundation.

Mr Pyne also has a personal connection to the eye health and vision sector – his father Dr Remington Pyne was an eye specialist who was instrumental in creating the first National Trachoma and Eye Health Programme and he has witnessed firsthand how restoring sight can change lives.

Before entering politics, Mr Pyne practiced as a solicitor, and he is also a media commentator and a published author – with his most recent book, The Insider, released in June 2020.

Mr Pyne said it was “an honour to be joining the Board of an organisation of such importance to the health and wellbeing of Australians.

“I thank Amanda Vanstone for her significant contributions during her six years as chair and look forward to building on these.

“My father was an eye specialist so I have seen firsthand just how important the protection and restoration of sight can be – especially to Aboriginal and Torres Strait Islander People.

“Fixing people’s vision and giving them the capacity to see the world around them is one of the great things a person can do to help others and I’m pleased to have this opportunity to contribute to this significant work.”

Speaking of Mr Pyne’s appointment, Ms Abbott said,  “With the number of Australians living with vision loss forecast to almost double within 10 years, there has never been a more important time to have eminent Australians like Christopher supporting improvements to eye care.

“On behalf of the sector, I also want to thank Amanda Vanstone for the significant contributions she made to the organisation over her six years as Chair.

“She steered the Board with a consistent combination of laser-like focus and good humour and brought a wealth of knowledge, networks and intellect to the role.”