Measuring the Impact of COVID-19 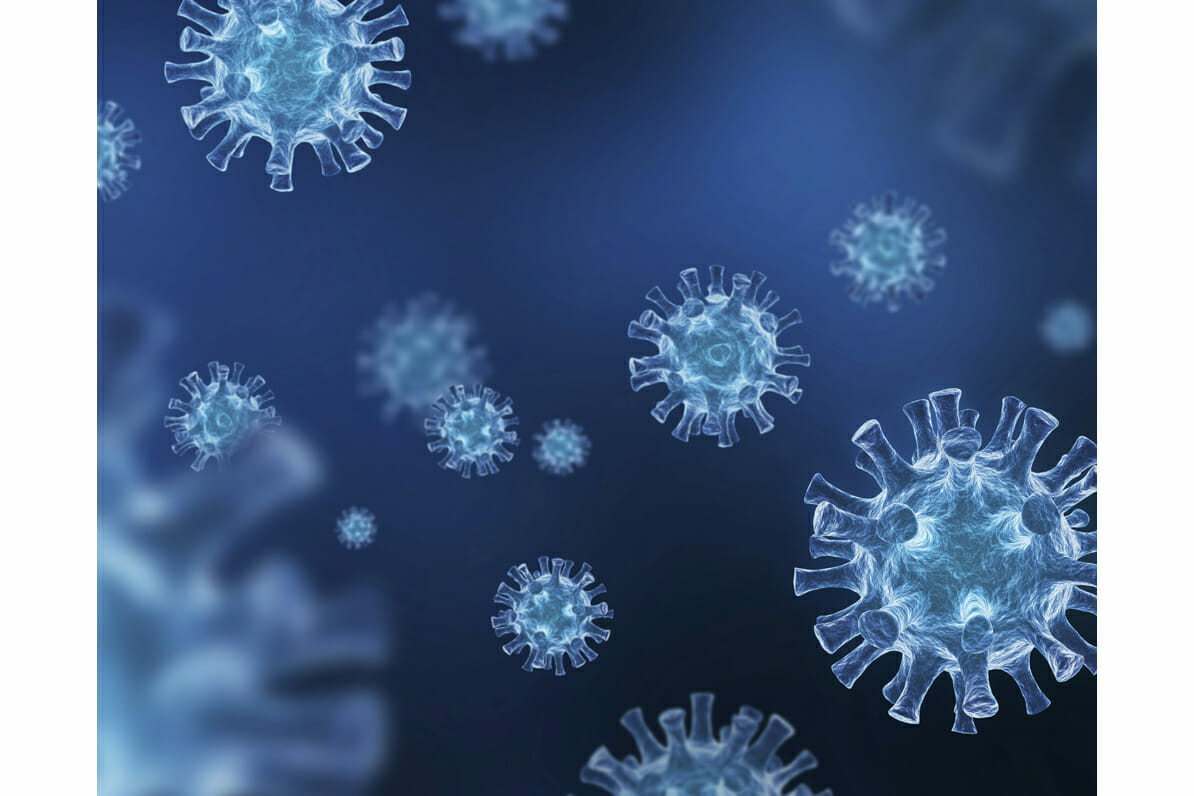 Close measurement of glaucoma detection at Specsavers has provided valuable insights into the impact of COVID-19 on eye care. The good news is that detection rates for glaucoma and other eye diseases are increasing post-lockdown periods. However, it will take time and encouragement from eye care professionals to get all patients back into practices for clinical examinations.

Like all sectors, the eye care industry is keenly looking to understand the health and economic impacts of COVID-19. In October 2020, Optometry Australia released a summary of Medicare statistics,1 reporting a 6–7% drop in optometric services in the 2019/20 financial year compared to the previous year. This quantified the immediate impact of COVID restrictions as 630,000 fewer Medicare billed optometric services nationwide. 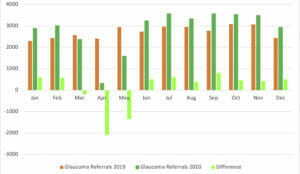 Since June 2020, resurgences of the virus have resulted in fluctuating restriction levels, impacting the delivery of eye care to vastly different degrees, depending on region. The inevitable consequence of this is that the road to recovery looks very different across the country, in particular for metropolitan Melbourne where lockdown measures were in place for almost twice as long as other regions. Clinical data has become incredibly useful in understanding where reduced access to optometrists has impacted on routine care, as well as the diagnosis and management of prevalent eye conditions in the primary eye care setting.

For optometrists operating in a lockdown situation, urgent and essential services were rightly reserved for emergency presentations, patients with acute or progressed symptoms, and those with known at-risk conditions necessitating care. As such, detection of silently progressive eye conditions like glaucoma, which is estimated to affect 3% of the population over the age of 40,2 has been significantly impacted due to disruption to routine eye care in 2020.

At Specsavers, the years preceding the outbreak of COVID-19 saw the culmination of several significant clinical initiatives designed to target detection of glaucoma. Consistent use of optical coherence tomography (OCT) for all patients, education around clinical indications for visual fields assessments, and implementation of the Royal Australian and New Zealand (RANZCO) Referral Pathways for Glaucoma Management provided a consistent framework enhancing glaucoma diagnosis across the network. After several years of measurement, 2019 was a defining year for glaucoma care as national detection rates across the Specsavers network averaged 1.2% of total patients (approximately 2.4% of patients seen over the age of 40), with 50% of these glaucoma referrals relating to new detection of the disease.

At a national level, restrictions were in place between March and May 2020. Figure 1 demonstrates a significant decrease in glaucoma referrals over this period driven by a drastic drop in patient attendance due to restrictions. Figures from metropolitan Melbourne are excluded from this and are discussed later in this article.

Based on corresponding glaucoma detections for the same period in 2019, 3,635 patients were estimated to have missed a glaucoma-identifying eye test over this time. Despite a significant drop in volume, the glaucoma referral rate remained steady during the essential care model, with 1.5% of patients presenting referred for glaucoma. 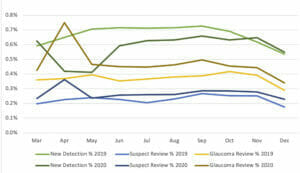 Figure 2. Types of glaucoma referrals as a percentage of patients by month.

The data shows that there was a 16% drop in new detections but referrals for patients with existing glaucoma increased by 12% (Figure 2). This is a reflection of optometric services being accessed by patients with known glaucoma, acute glaucomatous symptoms and/or progression of existing glaucomatous signs during this time and less incidental detection of the disease.

As expected, the data shows that increased access to routine eye tests since June 2020 saw detection volumes recover rapidly. This was tracked to the point at which the estimated group of missed detections was recovered at the end of December 2020.

The data also shows a sustained 0.1% increase in national glaucoma detection rates (1.2% to 1.3%) when restrictions were lifted and routine eye care resumed. This occurred simultaneous to a higher than normal demand for services and is equivalent to an additional 1,800 Specsavers’ glaucoma detections in the recovery period June to December 2020. This promising trend indicates that missed glaucoma detections are recoverable, even as optometry practices adjust to new and changing COVID-safe protocols. It also suggests that access to care in the post-restriction period is crucial to timely detection of conditions, such as glaucoma, that are likely to present at a higher prevalence as patients, who are overdue for their review or routine eye test, return.

METROPOLITAN MELBOURNE LOCKDOWN AND ITS IMPACT

As the rest of the country experienced a gradual easing of restrictions in the second half of 2020, the state of Victoria bunkered down for one of the longest and strictest COVID-19 lockdowns that has occurred in the world to date. For metropolitan Melbourne, significant restrictions were in place from March until October 2020, resulting in the majority of optometry practices limiting services for almost five months. 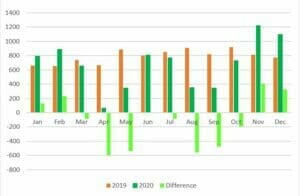 It is still very early to understand the impact of this type of disruption to routine care on glaucoma detection, however initial statistics show metropolitan Melbourne is likely to see a rapid return to pre-COVID glaucoma detection volumes occurring in line with what was experienced in other regions of Australia in 2020.

We have estimated that more than 2,500 patients with undiagnosed glaucoma were unable to access routine care during the five-month period of heavy restrictions. This is equivalent to 41% of the estimated total glaucoma detections missed nationally, just in the state of Victoria. However, with the easing of restrictions and the return of patients for overdue reviews and routine care, an increase of detections has been seen. In November and December alone, an additional 730 glaucoma diagnoses were made across Specsavers’ metropolitan Melbourne practices compared to the same period in 2019 (Figure 3). While these numbers are encouraging, they still only represent 33% of the estimated patients missed, indicating a longer recovery ahead before equilibrium is achieved.

IMPACT ON ALL REFERRALS

A closer look at referrals both nationally and for metropolitan Melbourne has also revealed that glaucoma detection was more severely impacted than referrals for other eye conditions such as retinal disorders, macular degeneration and diabetic retinopathy (Figure 4). This is likely to be explained by the often-asymptomatic nature of glaucoma and highlights the association between routine eye tests and new detection of glaucoma in patients.

FALSE POSITIVES AND THE FEEDBACK LOOP

Ophthalmology feedback remains important to confirm validity of referrals. In 2019, a subset of 784 Australian patient referrals for glaucoma were analysed to determine the false positive rate. Of those within the subset classified as first assessment referrals (previously undiagnosed glaucoma), 83% were confirmed as definite or probable glaucoma, equating to a 17% false positive rate. Feedback loops such as this are an invaluable way to synchronise referral pathways between local optometry-ophthalmology networks, ensuring that the right people are referred at the right time for early treatment of glaucoma, particularly in the current climate. This type of practical feedback has been largely remarked upon by the ophthalmology industry as necessary to drive systemic change. 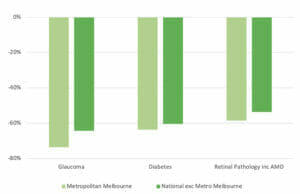 IT’S IN THE EVIDENCE

These figures reflect the impact as shown by Specsavers data, but may serve as an indication of what is occurring across Australia in primary optometric practice. They also begin to reveal the scale of impact of the Victorian lockdown, and how data is critical to better understanding and addressing the nuanced challenges that exist in each region – assisting with access to care and prioritisation of highrisk patients.

As we begin 2021, the data also evidences the role of routine eye tests in timely detection of progressive eye conditions including glaucoma. There is ongoing work to be done to ensure patients who have delayed or cancelled their recommended review are encouraged and enabled to return safely, and there is good evidence to suggest recovery is possible with a focus on access and consistency of care.

Dr Ashby is Director of Optometry for Specsavers Australia New Zealand with responsibility for clinical performance, optometry professional development, professional services and the development of clinical systems. He is actively involved in the research, development and implementation of sustainable models of eye care delivery that improve patient outcomes and reduce avoidable blindness.

Dr Ashby sits on the Glaucoma Australia council as Optometry Chair, the Optometry Australia glaucoma clinical guidelines working group, Deakin University Optometry Advisory Board, is an Adjunct Lecturer at UNSW and an Honorary Teaching Fellow at the University of Auckland.