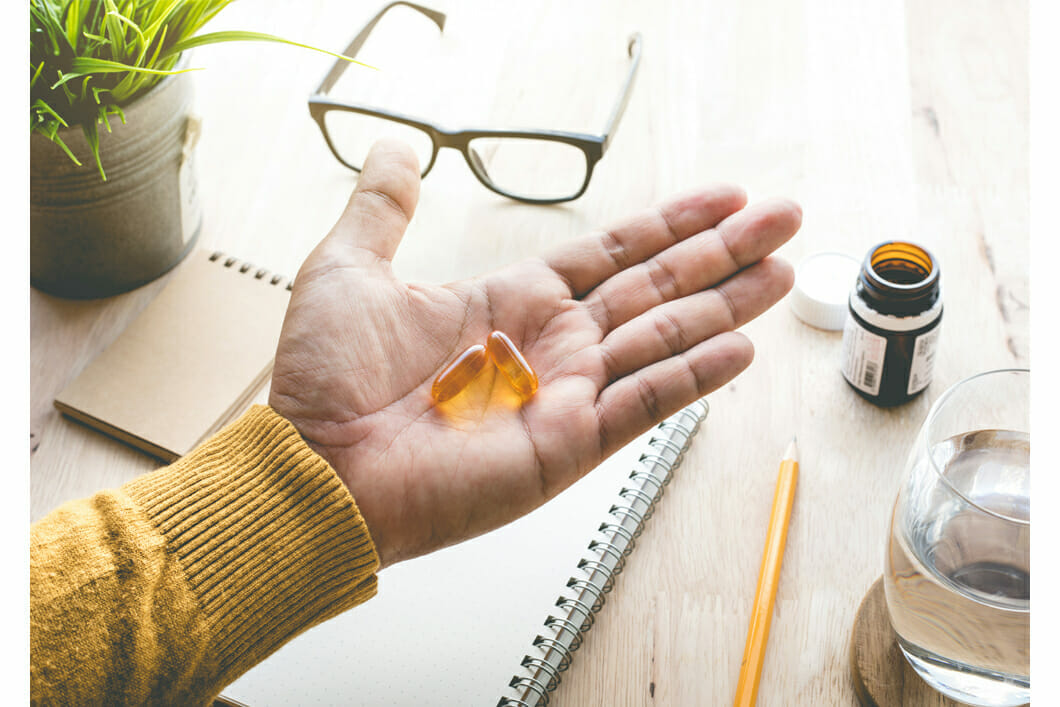 An investigation underway at Centre for Eye Research Australia in Melbourne has shown, for the first time, that nicotinamide – a water-soluble form of vitamin B3 – can improve visual function and potentially slow glaucoma progression. Now the researchers are moving forward to study its long-term potential to reduce visual field progression. 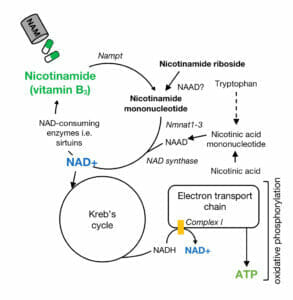 Figure 1. How nicotinamide and adenosine triphosphate (ATP) are produced. NAD+ is a key molecule used in Kreb’s cycle and oxidative phosphorylation to create ATP. Complex I (yellow) within the electron transport chain, is a site of potential mitochondrial dysfunction in glaucoma.

Glaucoma remains the leading cause of irreversible blindness worldwide.1 The disease has a complex aetiology and a range of risk factors but is characterised by the gradual dysfunction and loss of retinal ganglion cells (RGCs) and their axons which make up the optic nerve.2,3 Glaucoma has traditionally been considered as a one-way street, whereby the retina gradually loses RGCs, causing irreversible vision loss. However, there is increasing evidence of the potential for people to show signs of visual recovery in response to glaucoma treatment.4-6

Age,1,7 genetics,8 and elevated intraocular pressure (IOP)9 are all major risk factors for glaucoma. However, clinically available treatments only target IOP lowering and do not directly target the neurodegenerative events occurring at the retina and optic nerve. Despite the treatment options available, many high-risk patients do not respond well to IOP-lowering treatments or continue to progress to blindness despite low IOP. As such, new strategies that directly target and protect the health of RGCs and decrease vulnerability to glaucoma-related stressors are needed.

There is accumulating evidence that points to the role of insufficient energy supply in the development of glaucoma.10 The retina has a relatively large demand for energy and like all cells, requires the production of adenosine triphosphate (ATP). The majority of ATP used in the retina is produced via a process called oxidative phosphorylation (OXPHOS, Figure 1), which occurs in mitochondria, making them essentially the batteries in our cells.

There have been many studies demonstrating signs of oxidative stress and dysfunctional mitochondria both in ageing11 and in glaucoma.12,13 Work from our labs has previously shown defects in the OXPHOS process in cells from people suffering from primary open angle glaucoma (POAG),14 suggesting that the mitochondria aren’t working optimally in the disease. Indeed, a model of inherited glaucoma showed that there were extensive defects to the structure and function of mitochondria and reduced levels of ATP in the retina in addition to loss of RGCs.15

Nicotinamide adenine dinucleotide (NAD+) is an essential molecule that is critical for ATP production in mitochondria (Figure 1), and plays an important role in ageing and stress resistance.16 Recently, a range of studies have shown the benefit of regulating the NAD+ pathways via dietary supplements or exercise in ageing and neurodegenerative diseases including glaucoma.17-24

Additionally, recent work has indicated that people with POAG have reduced serum levels of nicotinamide (NAM), an essential precursor for NAD+, indicating that reduced NAD+ levels in our bodies may be associated with increased susceptibility to glaucoma.25 In support of this idea, our collaborator, Williams et al15 demonstrated that we could increase levels of NAD+ in the retina by supplementing the diet with NAM. This in turn provided robust long-term protection of the optic nerve in a glaucoma prone mouse model.

NAM has been grouped together with niacin and nicotinic acid under the collective term of ‘vitamin B3’ in much of the scientific and medical literature. However, niacin and nicotinic acid have known ocular and systemic side effects at high doses.26,27 NAM supplements on the other hand, are widely commercially available and have a good safety profile.28 NAM is safe, well-tolerated, cost effective, and represents an ideal candidate for neuroprotection in glaucoma. The wide availability of NAM supplements also means that if it is shown to have long-term benefits in slowing glaucoma progression, the therapy can be rapidly introduced into clinical management as an adjunct therapy to current treatments.

We therefore aimed to investigate whether NAM supplementation, via a commercially available vitamin supplement, could lead to a detectable improvement in visual function in people with glaucoma. We conducted the world’s first prospective, placebo controlled randomised crossover clinical trial using NAM supplementation in people diagnosed and treated with glaucoma.29 Each participant was given either placebo or high-dose NAM for 12 weeks before they crossed over to receive the other intervention. 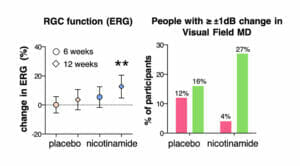 Figure 2. The photopic negative response (PhNR) is a sensitive measure of RGC function. The PhNR improved 12 weeks after commencing NAM relative to baseline (%, P=0.002). It was unaltered when the same patients took placebo or six-weeks post NAM. Mean ± 95% CI, n = 43. Additionally, 27% of participants showed a >1 dB improvement in visual field MD after 12 weeks of NAM supplementation.

We discovered a clear improvement in the function of RGCs as measured using electroretinography (ERG) after 12 weeks of NAM supplementation (Figure 2). Recording the ERG allows us to non-invasively and objectively measure the functional activity of the retina in response to light, and in particular RGCs via the photopic negative response (PhNR). We believe that the early improvement in the PhNR following NAM supplementation reflects an improvement in RGC ‘health’. This is the first time that a therapeutic agent has improved visual function in glaucoma by mechanisms other than by IOP lowering. It is however, not yet known whether this short-term improvement in the PhNR is sustained in the longer-term and can accurately predict a delay in visual field progression.

Overall, NAM was well tolerated by participants with an excellent adherence rate. Minimal side effects were reported. As systemic NAM levels have been shown to be reduced in people with POAG,25 NAM supplementation may be a convenient, safe, and cost-effective therapy to be used in conjunction with existing IOP-lowering treatments.

In addition, there is growing evidence that RGCs retain the capacity to recover function after injury following IOP treatment4,5,30-34 or in response to providing bioenergetic substances such as glucose.6 A number of reports have shown improvements in contrast sensitivity and visual field parameters in response to IOP lowering, 5,33-36 and some studies indicate that these improvements in visual function can be sustained for years.37,38

Our recent study demonstrates the potential of NAM as an adjunct therapy for glaucoma. While these outcomes are promising, we now aim to conclusively determine whether NAM can lead to reduced longer-term glaucoma visual field progression. Visual fields are the goldstandard for measuring visual function in longitudinal glaucoma clinical trials. Based on the review by De Moraes et al,39 a reduction in visual field progression by 30% during a longitudinal clinical trial can make a clinically meaningful impact on a patient’s health-related quality of life.

Together with Prof Keith Martin, we are currently planning a larger clinical trial of NAM treatment in people with glaucoma. In this two-year trial, we aim to determine whether high-dose NAM supplementation can lead to a significant reduction in visual field progression in people with POAG. We anticipate that participant recruitment will commence towards mid-2021. This clinical trial could lead to a novel therapy that directly promotes retinal ganglion cell health and survival in glaucoma.

To find out more about registering for the trial, or to register interest, visit: www.cera.org.au/current-trials.

Dr Flora Hui is a clinician scientist working at the Centre for Eye Research Australia and the Department of Optometry and Vision Sciences at the University of Melbourne.

She completed her optometry degree at the University of Melbourne, followed by MPhil and PhD in fundamental sciences, concentrating on investigating models of glaucoma and using retinal imaging as a biomarker for the brain. She then moved into glaucoma clinical research, focusing on developing novel clinical tools for earlier detection of glaucoma progression. With Prof Jonathan Crowston, she led the world-first clinical trial investigating nicotinamide as a neuroprotectant in people with glaucoma.