Cataract Surgery in Patients with Retinal Disease: A Practical Review 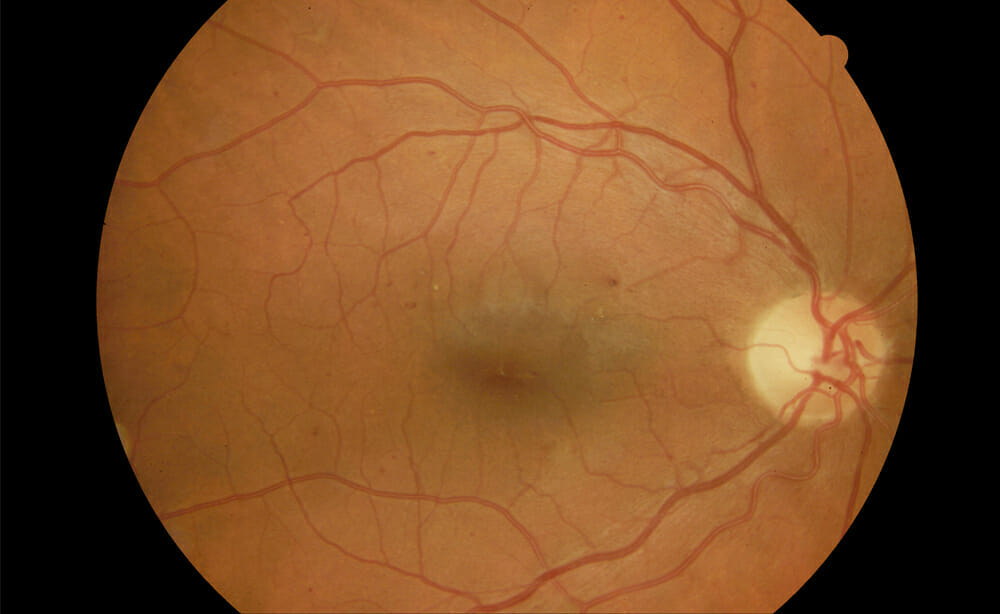 Cataract patients with retinal disease present unique challenges. A series of case histories demonstrates the valuable role optometrists have in their co-management.

As optometrists, you have an important role to play in managing patients with co-existing cataracts and retinal disease due to expanding scopes of optometric practice, ocular therapeutics training, increasing access to advanced retinal imaging technologies such as optical coherence tomography (OCT), and increasing involvement in ocular disease co-management.

Important and potentially life changing decisions need to be made about the appropriate timing of surgery, choice of surgical technique, intraocular lens (IOL) type… Important and potentially life changing decisions need to be made about the appropriate timing of surgery, choice of surgical technique, intraocular lens (IOL) type, refractive target, and the use of adjunctive treatments such as intravitreal drugs and retinal laser.

Using a series of case histories, this article reviews some important pre-operative and post-operative considerations in the management of patients with cataracts and a variety of common co-existing retinal diseases.

I advised Ms B that she should benefit from cataract surgery with improved clarity of vision and that things would appear brighter. However, I warned her that she would still need to wear glasses for many tasks because, due to the presence of AMD, she was not a good candidate for MF-IOLs or pseudophakic monovision. I also advised her that due to the natural history of AMD, she may experience deterioration of vision in the long term despite having cataract surgery. Ms B was disappointed to hear that she would need to wear reading glasses after surgery but accepted my explanation and elected to proceed with surgery.

Cataract surgery, in the presence of retinal disease, is more complex and patient expectations need to be managed appropriately

Ms B was happy with her vision and used glasses for near tasks. Her retinal condition was stable. Mr T was a 65-year-old man referred for cataract surgery. He complained of a oneyear history of deteriorating vision and reported that straight lines appeared wavy.

Post-op OCT showed a marked reduction in macular thickening with no residual ERM.

The patient was advised about the symptoms of a retinal detachment (RD) and discharged to the care of his referring optometrist for monitoring with OCT scans and ultrawidefield retinal imaging. Mr C was a 57-year-old male computer engineer referred for cataract surgery. He had a history of bilateral macula-on RDs, which I had repaired with vitrectomy surgery two years prior. His optometrist recorded corrected VAs of 6/6 OU 12 months prior to referral.

Mr C had a strong desire to become spectacle independent after surgery. He had researched multifocal IOLs extensively on the internet and requested trifocal IOLs.

Bilateral cataract surgery with implantation of toric diffractive trifocal blue light filtering hydrophilic acrylic IOLs (Alcon PanOptix) was performed. Back-up monofocal IOLs were ordered and ready for use in case of per-operative complications such as zonular dehiscence or dropped nucleus.

At three months post-op, Mr C was seeing 6/6 and N5 unaided with each eye. As expected with diffractive MF-IOLs, he reported seeing haloes around lights when driving at night but did not find them intrusive. The retinas were stable and Mr C was discharged to the care of his optometrist. 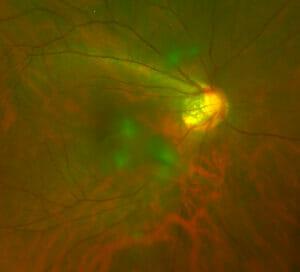 Ms D was a 59-year-old female executive referred for right cataract surgery. She complained of deteriorating right vision and highly symptomatic right floaters for one year. She reported having to constantly blink to shift the floaters out of her visual axis. Her ocular history was notable for left cataract surgery two years prior, with a post-operative myopic refractive surprise and bilateral LASIK surgery 15 years previously. The pre-LASIK refractive error was approximately -9D OU. She had a family history of retinal detachment affecting her father and sister.

Ms D had a history of successful monovision with contact lenses and a strong desire to avoid having to wear glasses for social events.

There were numerous large right vitreous floaters, a right temporal peripheral horseshoe retinal tear adjacent to an area of lattice degeneration, and bilateral posterior staphylomata (Figure 4). The right eye was determined to be dominant using a hole-in-card test.

Ms D was advised that IOL power calculations were significantly less accurate in eyes with prior corneal laser refractive surgery and those with high axial myopia, leading to an increased risk of a post-operative refractive surprise as had happened with her left cataract surgery. If a refractive surprise occurred, Ms D was warned that she may need to wear glasses to see clearly or have additional surgery to correct the residual refractive error.

Biometry and IOL calculations using multiple post-LASIK IOL formulae, including the Barrett true-K formula, were performed and the measurements were double checked.

A left YAG posterior capsulotomy was performed and right retinal laser treatment for the horseshoe retinal tear was performed to reduce the risk of RD. Subsequently, a right phacovitrectomy, with removal of the floaters, was performed. A pseudophakic monovision strategy was used and a hydrophilic acrylic blue light filtering monofocal IOL was implanted, targeting plano.

Diabetic retinopathy and DME can progress faster after cataract surgery, which can lead to poor visual outcomes, so it is important to treat DME before cataract surgery is considered

At one month post-op a right myopic surprise was noted with an uncorrected right VA of 6/12 and BCVA of 6/6 (-1.25D). Ms D was highly motivated to have better unaided distance vision, so I performed an IOL exchange procedure replacing the original IOL with a lower power IOL of the same model.

At three months post-op, Ms D was seeing 6/6 unaided with the right eye, adapted well to monovision, reported no floaters and was happy with her vision. No new retinal pathology was visible and Ms D was warned about the symptoms of a RD with advice to see an optometrist or ophthalmologist urgently if she developed any. She was discharged to the care of her optometrist and informed about the likely development of PCO in the future.

Mr J was a 55-year-old electrician referred for cataract surgery.

He complained of deteriorating vision over a six-month period. He had a seven-year history of type 2 diabetes, hypercholesterolaemia and hypertension, which were well controlled. A recent HbA1c was 7.1%. His medications included metformin, aspirin, atorvastatin and lisinopril. 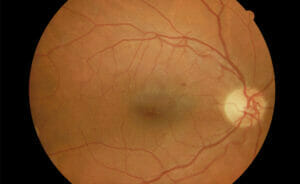 Following discussion with Mr J’s endocrinologist, treatment with fenofibrate was started. Bilateral intravitreal anti- VEGF therapy with aflibercept (Eylea) was initiated. After a series of monthly injections performed over six months, the DME had largely resolved and VA had improved to 6/9 OD, 6/12 OS.

One month following surgery, Mr J’s VA was 6/6 unaided in each eye.

Because cataracts and retinal disease commonly co-exist, make a conscious effort to thoroughly assess the retina before attributing visual symptoms to cataracts alone.

To avoid unhappy patients, set realistic expectations before referral for cataract surgery. Advise patients that underlying retinal diseases may limit their visual results following cataract surgery and often preclude the use of MF-IOLs and monovision strategies. They will likely still need optical correction with glasses or contact lenses for some tasks after surgery.

Patients should also be made aware that retinal conditions, such as diabetic retinopathy and epiretinal membranes, may progress after cataract surgery. Patients with exudative AMD, retinal vein occlusions or diabetic retinopathy may benefit from adjunctive therapies such as intravitreal anti-drugs (e.g. anti- VEGF agents or steroids) or retinal laser treatment, so consider referring them to a retinal specialist for assessment prior to cataract surgery. Ideally, diabetic patients should have control of their blood glucose and blood pressure optimised before referral for cataract surgery.

Myopic patients are at increased risk of retinal detachment and this risk increases following cataract surgery. These patients should have a careful examination of the peripheral retina to detect any high risk pathology, such as retinal tears, that may benefit from laser treatment prior to surgery. These patients should also be warned about the symptoms of retinal detachment and advised to seek urgent optometric or ophthalmic care if they occur.

Some patients with ERMs, macular holes, vitreomacular traction, diabetic retinopathy or symptomatic floaters may benefit from combined cataract and vitrectomy surgery (phacovitrectomy) to address the cataract and retinal condition simultaneously. There are numerous pros and cons to combined surgery versus sequential surgery. Consider referring these patients to a vitreoretinal surgeon that performs cataract surgery to discuss whether combined surgery would be appropriate for them.

Patients with retinal disease pose unique challenges during cataract surgery, and they may be prone to a more difficult post-operative recovery. However, with careful pre-operative assessment, appropriate surgical techniques and careful post-operative monitoring, these patients can still achieve excellent results and optometrists are well placed to guide them along their journey.

Dr Simon Chen MBBS, FRANZCO is an experienced cataract and vitreoretinal surgeon at Vision Eye Institute in Chatswood, Bondi Junction and Drummoyne in Sydney. He is also a Conjoint Senior Lecturer at UNSW. His practice is dedicated to cataract and retinal surgery. He has an interest in performing complex cataract surgery in patients with retinal disease or ocular trauma.

Dr Chen has had the privilege of performing cataract or retinal surgery on over 100 Sydney optometrists and their closest relatives, and was the first surgeon in the world to perform femtosecond laser cataract surgery combined with vitrectomy surgery. Dr Chen graduated in Medicine and Surgery from the University of London, then trained in Ophthalmology at the teaching hospitals of the University of Oxford and the University of Cambridge, UK. He completed Vitreoretinal Surgery fellowships at the Oxford Eye Hospital and Lions Eye Institute, Australia. He has published on various aspects of cataract and retinal surgery. He has been a principal investigator for numerous international clinical trials of novel treatments for retinal disease.