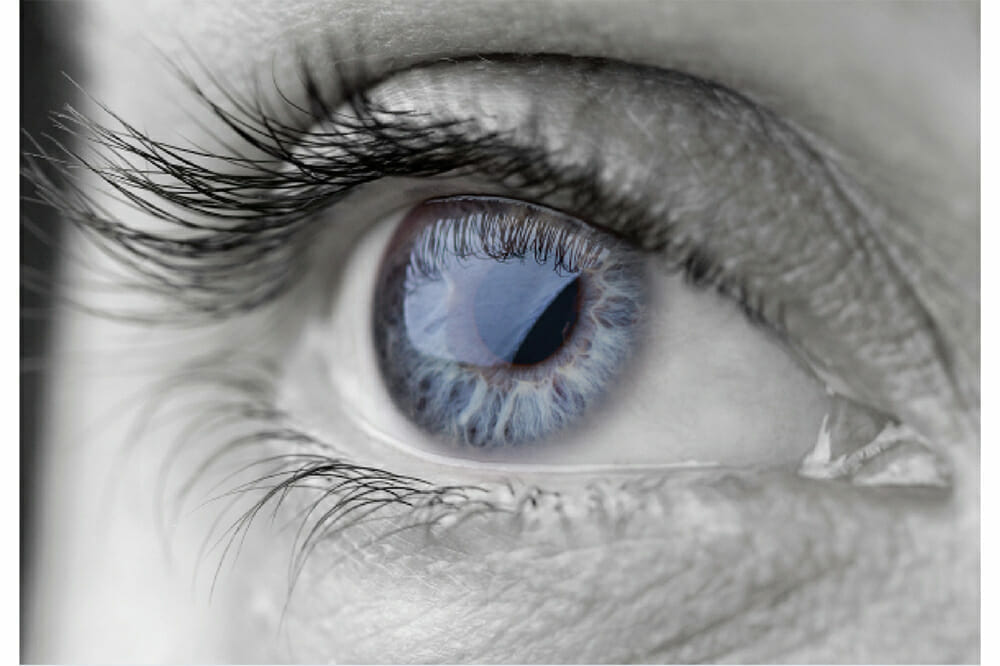 Fluid in the macula is a non-specific sign that can present in a wide range of different conditions. Some of the conditions are vision threatening and demand prompt treatment, while watchful observation is sufficient for others. Accurate diagnosis and appropriate management are instrumental in optimising patient care and visual outcomes.

A 77-year-old Caucasian male was referred to the Centre for Eye Health, University of New South Wales for a macular assessment. He reported increased blurry vision in the left eye for the past six months. His medical history was significant for hypertension managed with Exforge. He was a previous smoker but quit a long time ago. There was a family history of glaucoma in his father, but no family history of age-related macular degeneration (AMD).

OCT-A, with the advantages of being fast, non-invasive, repeatable and capable of delineating the depth of lesions, is playing an increasingly important role in supporting the diagnosis and management 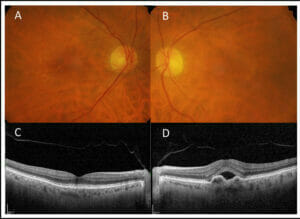 On examination, best corrected visual acuities were 6/12 right, which improved to 6/7.5 with pinhole and 6/9.5-2 left. He had a symmetric degree of moderate hyperopia with astigmatism in both eyes. Amsler grid was clear in the right eye and showed metamorphopsia in the central six degrees view by the left eye. Intraocular pressures, measured by iCare tonometry, were 11mmHg right and 12mmHg left at 4:34pm. Slit lamp examination showed bilateral early nuclear sclerosis. Multimodal imaging results are provided in Figure 1. Colour fundus photography (Figure 1A and 1B) showed mixed intermediate and large sized drusen in the right macula and less distinctive drusen and hypo-pigmentary abnormalities in the left. The optic nerve heads were unremarkable. Spectral domain optical coherence tomography (SD-OCT) of the right macula showed hyperreflectivity between the retinal pigment epithelium (RPE) and Bruch’s membrane consistent with drusen (Figure 1C). In the left, there was a neurosensory detachment of the macula with subretinal fluid and irregular pigment epithelial detachment (PED) with heterogenous internal hyperreflectivity (Figure 1D). The peripheral retina was unremarkable in both eyes.

A myriad of conditions present with subretinal fluid at the macula and can be grossly categorised into five groups:

2) Inflammatory conditions such as Vogt-Koyanagi-Harada syndrome,

4) Anatomic abnormalities such as optic disc pit and dome-shaped macula, and

5) Others such as bestrophinopathies, secondary to trauma, drug toxicity and ocular surgery.1

The leading differential diagnoses for this case are CSCR, PCV and (CNV) associated with neovascular age-related macular degeneration (nAMD).

CSCR is a common cause of central vision primarily affecting young males with a peak onset of 40–50 years.2 It belongs to a group of conditions collectively known as pachychoroid spectrum disease, which manifest common signs including thickening of the choroid, dilation of large choroid vessels (pachyvessels), and thinning of choriocapillaris with or without overlying RPE disturbance.3

Acute CSCR is defined as acute onset, serous neurosensory retinal detachment, with spontaneous resolution of the subretinal fluid in three to six months without RPE decompensation and a good visual prognosis.2,4,5 PED is found in over 50% of eyes with acute CSCR,6-9 and is typically dome-shaped and sharply demarcated, with hypo-reflective internal reflectivity representing serous composition and intact underlying Bruch’s membrane (Figure 2A). 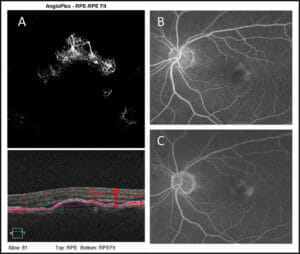 By definition, acute CSCR is not complicated by macular neovascularisation, so OCTA should not show any positive flow sign-als. Given its self-resolving nature, initial observation in three to four months is generally the standard practice for management.2

PCV, also known as aneurysmal type 1 neovascularisation, is characterised by the presence of nodular lesions arising from the choroidal neovascular network in the sub-RPE space, best visualised using indocyanine green angiography (ICGA).10,11 PCV is found more commonly in Asian and African than in Caucasian populations.10 Caucasian individuals with PCV are older, have higher prevalence of large drusen, lower prevalence of subretinal haemorrhage, and smaller polypoidal lesions than their Asian counterparts. PCV belongs to the umbrella group of pachychoroid spectrum disease and will manifest the pachychoroid signs shown in CSCR, namely thickened choroid and pachyvessels.3 PED in PCV can be complex and multilobular with the peaked or notched component corresponding to polypoidal lesions while the flat irregular variant harbours the neovascular network (Figure 2B).11 OCTA can reliably and consistently detect the neovascularisation as a tangled vascular network in the sub-RPE space but is inferior to ICGA in displaying polypoidal lesions, partially because the slow blood flow in these lesions is below the instrument’s detection threshold.10 PCV, if exudative, is treated with anti-VEGF intravitreal injections with or without verteporfin photodynamic therapy (PDT). The major landmark treatment trials showed the majority of patients respond well to intravitreal injections alone, although in some patients additional PDT delivered a better visual outcome and higher polypoidal closure rate compared to intravitreal injection monotherapy.12.13

Fluid, intraretinal or subretinal, is a wellestablished OCT biomarker for nAMD.14 PED is present in about 30% to 80% of nAMD patients based on the major treatment trials and can be vascularised (harbouring neovascular materials) or non-vascularised (drusenoid or serous).15-17 On OCT, vascularised PED has an uneven surface and an irregular shape (Figure 2C).18 The sub-RPE material is either highly hyper-reflective due to fibrovascular proliferation or heterogenous with collection of both hyper-reflective fibrovascular materials and hypo-reflective serous fluid.19 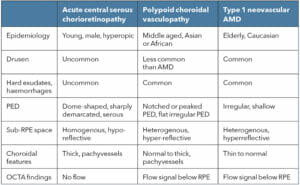 Based on multimodal imaging, three types of neovascularisation have been described in nAMD:

While nAMD is traditionally diagnosed and categorised using dye-based angiography; OCT-A, with the advantages of being fast, non-invasive, repeatable and capable of delineating the depth of lesions, is playing an increasingly important role in supporting diagnosis and management.21 Upon detection of exudative signs, such as macular haemorrhage and/or fluid, prompt treatment with anti-VEGF injections is indicated for nAMD. A treat-and-extend protocol has been widely adopted in clinical practice where the patient’s macula is first cleared of haemorrhage or fluid after a number of injections, then the treating ophthalmologist begins extending the interval between treatments, one to two weeks at a time, so long as the retina is dry and stable.22

To summarise, when comparing CSCR with nAMD, a younger demographic, absence of drusen, and a thick choroid strongly favours CSCR, whereas subretinal hyper-reflective material, and fibrovascular PED strongly favours nAMD.23 Compared with typical nAMD, PCV patients are younger with paucity of drusen, characterised with peaked PED and polypoidal dilatation and associated choroidal thickening. In this case, patient’s age, presence of drusen and fibrovascular PED, and the absence of pachychoroid signs support the diagnosis of exudative nAMD in the left eye and intermediate AMD in the right eye. This is corroborated by the OCT-A (Figure 3A) which shows intense flow signal in the RPE- RPE fit slab, suggestive of type 1 (sub-RPE) macular neovascularisation in the left eye.

The patient was referred promptly to a retinal ophthalmologist and was seen the next day. Fluorescein angiography was performed and showed stippled hyperfluorescence in the early frame (Figure 3B) and ill-defined staining in the late frame (Figure 3C), which in combination with the fibrovascular PED on the OCT structural B-scan, is in keeping with occult (type 1) macular neovascularisation. The retinal ophthalmologist commenced aflibercept (Eylea) intravitreal anti-VEGF injection treatment in the left eye. At four weeks follow-up, OCT showed reduced subretinal fluid. Another injection was performed, and his treatment interval was extended to five weeks. Furthermore, at the time of diagnosis, diet and lifestyle factors were discussed and the patient was recommended to commence AREDS II nutritional supplementation to reduce the risk of developing late AMD in the right eye, which was estimated to be 35.4% in five years.24 Amsler grid self-monitoring at home was also prescribed.

This case underscores the importance of being able to confidently distinguish the different causes of macular subretinal fluid using a combination of the clinical information and a multimodal imaging approach. Older age, presence of drusen, and fibrovascular PED should raise a high degree of suspicion for exudative neovascular AMD. Younger age, paucity, or absence of drusen and a thick choroid implicate pachychoroid spectrum disease. OCT-A, an emerging non-invasive technology, is valuable in detecting neovascularisation in the presence of macular fluid.

Pauline Xu BOptom (Hons) MOptom GradCert OcTher is the Lead Clinician – Retinal Dystrophies at Centre for Eye Health in New South Wales. The author would like to thank Dr Simon Chen for the fluorescein angiography results and followup data and Dr Angelica Ly for reviewing the manuscript.