In Australia, macular degeneration is the leading cause of blindness and severe vision loss,1 with one in seven Australians over 50 having some evidence of the disease.1 However, with visual symptoms in the early stages often absent or mild,2 detection and diagnosis can be difficult, while advanced stages of age-related macular degeneration (AMD) can lead to severe vision loss or blindness in patients.2 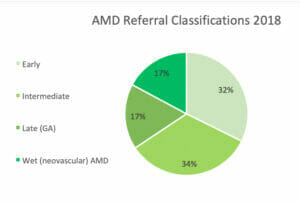 Optometrists in primary care play a critical role in recognising the signs and symptoms of AMD. However, while optometrists are well-versed in identification of visible signs of AMD during routine eye assessments, early detection of microscopic retinal changes is difficult, and predicting the risk of progression is a much more complex task requiring consideration of a multitude of patient factors. To add to this, many of these patients experience progression of concurrent age-related eye conditions, the most common being cataract, impeding fundus imagery and making it more difficult to determine the true cause of any measured vision reduction.

The ability of optical coherence tomography (OCT) to provide high-quality, cross-sectional analysis of the retina has seen it become widely used in the clinical management of AMD.2 A 2020 study found that OCT imaging appears to significantly improve the power of AMD screening, compared to colour fundus photography alone.2 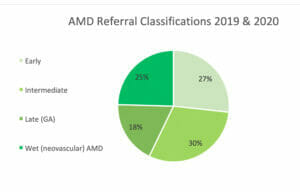 According to Naomi Barber, Head of Professional Services at Specsavers, the use of OCT, as part of a standard eye test for all patients, provides its optometrists with a valuable tool in their detection arsenal, allowing analysis of the retina in greater detail, identification of clinical signs that may indicate higher propensity for progression, and monitoring of even very subtle changes to the retinal architecture. When coupled with assessment of the patient risk profile, OCT is providing optometrists with greater confidence in detection and management of AMD.

A subset of 10,000 Specsavers patients referred for AMD during 2019 and 2020 has recently been analysed to understand more about how this condition is managed in primary care.

Ms Barber reported that within this subset, more than half of referrals (57%) were for early and intermediate stage AMD.

“Out of these patients, 84% were aged 65+. The RANZCO Referral Pathway for AMD management states that patients with early or intermediate AMD and with OCT risk factors should be considered for referral to a specialist. This is an opportunity to rule out other potential diagnoses, such as inherited retinal diseases, and to form a collaborative management plan with regular optometric review and careful OCT monitoring,” she noted.

“Unsurprisingly, the vast majority of nAMD referrals were classified as urgent/very urgent, in line with the RANZCO pathway. During peak COVID restrictions nationally in April 2020, referral rates for nAMD significantly increased to 34%, highlighting the importance of optometry practices remaining open in these times to ensure that patients needing urgent ophthalmological care were triaged and referred for care appropriately.

“Interestingly, while there has been a significant increase in patient referrals over the past several years, the data suggests there has been a reduction in patients referred with early AMD, from 32% in 2018 to 27% in 2019/20. This would suggest that systematic use of OCT by optometrists is improving the likelihood of detecting AMD at an earlier stage, and following RANZCO guidelines, optometrists are monitoring more patients with early disease,” Ms Barber said. 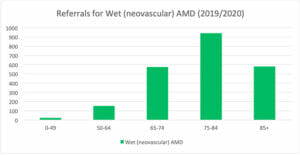 The data also shows age is a primary risk factor for AMD, with a significant increase in referrals for patients 65+ across all stages of AMD. This correlates well with what is known about the pathophysiology of AMD, namely that risk increases with age alongside several other risk factors such as smoking and family history. This data is consistent with the National Eye Health Survey, which found that every decade of age increased the risk of AMD for non-Indigenous Australians, with relative risk ratios for each decade ranging from 1.39 for early AMD to 13.51 for late AMD.3

The data also shows referrals for intermediate and wet AMD increase significantly for patients over 65, which aligns with studies that have found prevalence of late AMD increased with age, with the prevalence of nAMD increasing to 6.7% in participants 80 years and older.3

Ms Barber concluded that the trends seen in referrals for AMD correlate with established understanding of how patients with this condition are managed, and AMD epidemiology.

“The data suggests that systematic and consistent use of OCT has played a pivotal role in helping optometrists, as primary eye health providers, monitor early stages of the condition. The make-up of AMD referrals to specialists is changing, with more early-stage patients being managed predominantly by optometrists and a higher percentage of referrals now being made for neovascular AMD,” she said.