An international research effort has shed light on the role that two genes – Complement Factor H (CFH) and Factor H-Related 1 to 5 (FHR1-5) – play in the development of age-related macular degeneration (AMD).1

For many years, we have known that inflammation at the back of the eye plays a role in AMD development. Genetics studies have identified a series of genes which regulate the activity of the complement pathway – a key player in our immune defense against pathogens – that affect a person’s risk of developing the disease. The suggestion from these data is that AMD is caused, at least in part, by a failure of complement regulation in the eye. However, until now the role of these genes – Complement Factor H (CFH) and Factor H-Related 1 to 5 (FHR1-5) – has been unclear.

As part of an international collaboration funded by the UK Medical Research Council (MRC), scientists in Tübingen, Manchester and London developed new ways to measure the protein products of these genes, using a method called mass spectrometry.

By studying the levels of the CFH and FHR1-5 in the blood, they were able to show, for the first time, that all five FHR proteins are at higher levels in people with AMD than in those without. This builds on research published by scientists led by Simon Clark last year where FHR4 was found to be higher in individuals with AMD2 and in fact shows that it is FHR1 and FHR2 which seem to have the largest increase.

Furthermore, the team was able to study the genes which code for these proteins, and confirmed that it is the genes which modify the risk of AMD which are controlling these levels, strongly suggesting that it is increases in these blood proteins, driven by the genetic risk, which can modify the activity of the complement pathway and which drive AMD development.

Strikingly, a second research team led by Prof Anneke de Hollander at Radboud University, Nijmegen, The Netherlands, has been performing similar research at the same time and has near-identical findings. Both studies are published back-to-back in the American Journal of Human Genetics.

This work solves a huge unknown in the field, uncovering that a group of previously ill-defined genes that regulate complement likely contributes to our risk of developing AMD. The work provides a way to determine which patients display elevated levels of FHR proteins and introduces a series of new potential targets to develop therapies by lowering levels of FHR proteins that may lower the risk, or progression, of this debilitating condition.

“This really marks a step-change in our understanding around the driving mechanisms behind specific types of AMD. This follows on from our original discovery last year around FHR-4, but while all the FHR proteins are now known to be associated with disease risk it is unlikely to be the case for all AMD patients. Therefore, being able to measure these proteins in patients’ blood will be vital in identifying patients who will react to FHR-targeting therapies sometime in the future.” said Professor Simon Clark, Helmut Ecker Endowed Professor of AMD at Eberhard Karls University of Tübingen who co-supervised the work. 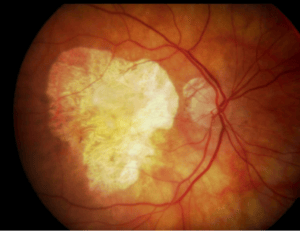 Figure 1. An eye with the dry form of age-related macular degeneration called geographic atrophy. Image courtesy of University of Manchester.

Dr Richard Unwin, who led the study in The University of Manchester, UK, added: “This is a hugely important study for people with AMD. Measuring the levels of these FHR proteins has been a massive challenge for the field over the last few years and is technically quite challenging as they are present at low levels in the blood and are very similar to each other. By using state-of-the-art mass spectrometry methods, we can now confidently measure these proteins and show for the first time what is an important, if not the most important, factor in how AMD develops.

This really pushed the field along, and opens up whole new areas for improving patient care, through the development of new treatments targeted at these proteins or in simply monitoring levels to discover who has higher levels of complement activation and as such will benefit from complement-modifying treatments.”.