Physiological Decentration in the Real World

Some physiological intraocular lens (IOL) decentration occurs in every eye implanted with an IOL and can adversely impact vison quality.1 Recent advances in the optical engineering of certain toric IOLs have taken this unavoidable issue into consideration to minimise the impact of higher order aberrations, including spherical aberration and coma.2 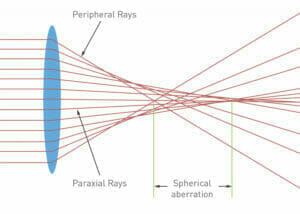 Wavefront aberrations are optical imperfections of the eye that prevent light from focusing perfectly on the retina, thereby resulting in defects in the visual image.1 Lower order aberrations (zero, first and second order) make up approximately 85% of visual deficiencies, with higher order aberrations (third, fourth etc.) accounting for the remaining 15%.1

According to Dr Ben LaHood, consultant ophthalmologist and refractive surgeon with Ashford Advanced Eye Care in Adelaide, unlike pathological eyes, such as those with keratoconus or corneal scars, these defects are perfectly normal.

“The human optical system of the eye is naturally flawed and does not align like a telescope,” he explained.

Regular astigmatism can be quantified using measurements of the lower order aberrations of defocus (myopia and hyperopia) and astigmatism – and can be corrected by spherical and cylindrical lenses.1,3 In contrast, irregular astigmatism represents a second group of errors in refractive status that cannot be corrected by a simple spherocylindrical lens.1,3 These errors have been quantified using wavefront analysers to give us varying combinations and magnitudes of higher order aberrations with over 60 types in total.1,3 These higher order aberrations vary in complexity, from the relatively easy-to-understand spherical aberration and coma to far more complex shapes, such as a pentafoil.1

The focus here is on these normal physiological imperfections and subsequent aberrations that are present, to varying extents, in all human eyes.1

Figure 2. Misalignment between the visual and the optical axis. *Studies have shown that the mean decentration or ‘off visual axis’ position of an IOL following cataract surgery is 0.4 ± 0.2 mm with a range up to 1.7 mm.8

Wavefront aberrations have been described by the mathematical term Zernike polynomials, which represent contributions of each lower and higher order aberration to the total wavefront.5 Our ability to use wavefront measurements to perform refractive procedures has become increasingly sophisticated.5 However, a problem identified with the Zernike wavefront description is that some higher order terms contain contributions from lower order terms.5 This means, for example, performing a wavefront optimised laser treatment aimed at reducing the impact of a higher order aberration may detrimentally impact the lower order refractive component.5 To address this issue, an alternative wavefront reconstruction method has recently been devised, by Gatinel and colleagues, that appears to provide a more clinically relevant method of describing and treating wavefront aberrations.5 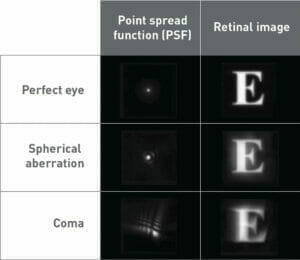 Coma is another type of higher order aberration that involves distortion in image formation due to light rays entering an optical system that is not parallel to the optical axis (Figure 2).1 This, in turn, leads to off-axis point sources, such as stars appearing distorted, with a cometlike tail (Figure 3).1 Coma occurs due to natural misalignment between the visual axis and optical (pupillary) axis.8 For this reason, decentration and tilt of the natural crystalline lens have been linked to increased coma.9

Why is it important to consider both spherical aberration and coma during cataract surgery? 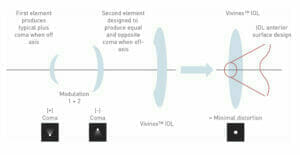 Figure 4. The Vivinex IOL combines independent optical elements one and two to induce positive and negative coma, thereby cancelling out coma caused by the naturally occurring off-axis conditions in the eye. This image is for illustration purposes only and may not be an exact representation of the product. Adapted from Sanger et al, 2014.12

According to Dr LaHood, “The effects on vision quality of lens design, decentration and tilt can be assessed by the modulation transfer function (MTF) of the visual system. Mean decentration of all IOLs is 0.30mm and mean tilt is 2.62º. Spherical IOLs and aspherically neutral IOLs are least sensitive to decentration, followed by negatively aspheric IOLs.

“Although spherical IOLs are relatively immune to decentration and tilt, they provide a relatively poorer MTF value and vision quality when centred appropriately.

“Aspherically neutral IOLs provide a high MTF value and are also quite immune to MTF deterioration with decentration. As negative asphericity increases, so does sensitivity to MTF degradation due to decentration, though keep in mind that for a 20D IOL with negative spherical aberration, decentration of over 0.75mm would be needed to degrade MTF to the level of a well-aligned spherical IOL. Even with 5º of tilt, an aspheric IOL will not drop its MTF to a level of a non-tilted spherical IOL. The design of the IOL and how this asphericity is incorporated also plays a role in determining sensitivity to decentration.”

Dr LaHood continued, “For most eyes with a physiological amount of expected decentration, a negatively aspheric IOL will provide excellent visual quality. If significant decentration and long-term IOL position is a concern, then an aspherically neutral IOL is a good compromise between vision quality and sensitivity to decentration.”

He said spherical aberration also increases in most cases with increased pupil size.1 This is particularly important to consider in young people with larger pupils undergoing refractive lens exchange. 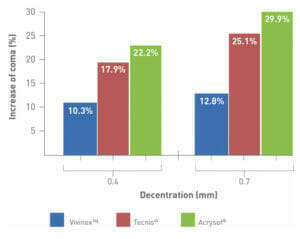 According to Hoya, the Vivinex IOL has been specifically engineered through proprietary technology to compensate for changes of the visual versus optical axes, thereby minimising the impact of relative decentration and resulting coma on image quality.2 It does this by using two distinct aspheric elements in the centre of the IOL that work together to cancel out coma, resulting in improved off-axis image quality versus traditional negative aspheric IOL designs (Figure 4).2 The central 1.2mm optical zone induces positive coma by using a convex meniscus structure, while the 1.2mm area around this central zone induces an equal negative coma through a concave meniscus structure.2

The study demonstrated that Vivinex was more immune to optical degradation caused by off axis positioning when compared to Tecnis and Acrysof IOLs (Figure 5 and Table 1).11

Dr LaHood said, “We now have excellent devices to measure various angles and axes pre-operatively to predict post-operative centration issues between IOLs and the major axes of the eye. Normal physiological amounts of IOL decentration will be present in every eye and I am impressed that the optical engineering of the Vivinex IOL design has taken this unavoidable issue into consideration.”

For a full list of indications, contraindications and medical conditions relating to the implantation of Hoya IOLs, please refer to the Instructions For Use.

This article was sponsored by an educational grant from Hoya Surgical Optics. The views and opinions expressed in this article by the clinical expert do not necessarily reflect the views and opinions of Hoya Surgical Optics. Vivinex and Hoya are trademarks of Hoya Corporation or its affiliates. Third-party trademarks used herein are the property of their respective owners.