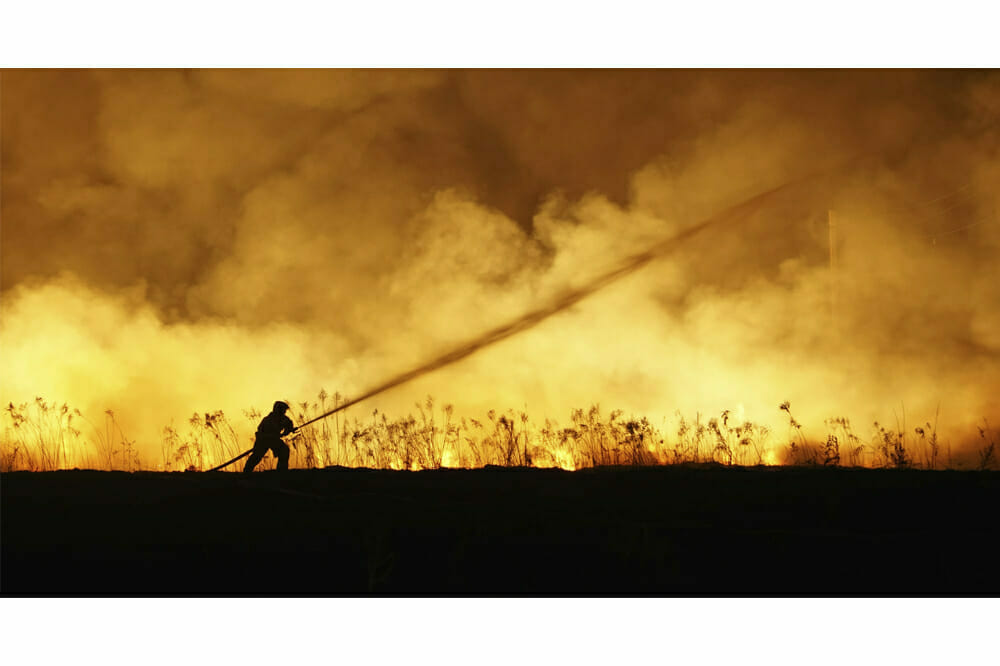 There has hardly been a time in living memory when almost half of Australia’s population was collectively exposed to hazardous conditions. This was the case with the 2019–2020 bushfire season in Australia, coined ‘Black Summer’. With 34 people dead, 2,100 homes destroyed, and 20% of Australian forests burnt, Black Summer became a noteworthy period in Australian history.1

Research at University of New South Wales School of Optometry and Vision Science aims to understand the impact of bushfire smoke on the ocular surface.

Bushfire smoke is comprised of hundreds of chemicals, gases, metals, microbial and particulate matter (PM), generated from the burning of organic and inorganic matter. Toxic compounds, many of which are recognised carcinogens, such as polycyclic hydrocarbons and volatile organic compounds, are often found in bushfire smoke. These and other toxic gases, such as sulfur dioxide, nitrous dioxide and carbon monoxide, are known eye irritants.2 PM2.5, particulate matter smaller than 2.5μg, is a common measure of air quality. Australian air quality standards set the ‘acceptable’ maximum concentration of PM2.5 in 24 hours in ambient air at 25μg/m3.3 This is despite widespread acceptance in scientific communities and among health care professionals, that there is no safe level of PM2.5 exposure below which there are no health effects.4 Air quality guidelines from the World Health Organisation, released in September 2021, recommend maximum exposure of PM2.5 to remain below 15μg/ m3 for a 24-hour period, with only three to four days per year of exceedances.5

…there is no safe level of PM2.5 exposure below which there are no health effects 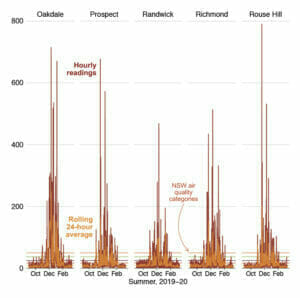 During Black Summer, air pollution levels were beyond ‘hazardous’ levels for weeks at a time, with metro and regional areas subject to relentless poor ambient air across New South Wales, Australian Capital Territory and Victoria (Figure 1). There were 417 deaths, 1,124 hospitalisations for cardiovascular disease and 2,027 hospitalisations for respiratory disease attributed to smoke exposure from Black Summer.6 Increased hospitalisations and emergency visits for cardiovascular and respiratory distress are common on the day of, and up to two days after, exposure.7 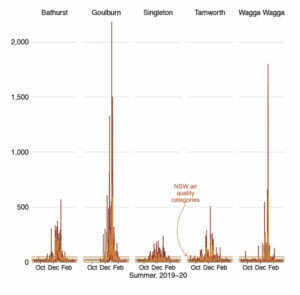 Figure 1. PM2.5 levels across A. Sydney and B. regional NSW during Black Summer, based on hourly readings.1

IMPACT ON THE OCULAR SURFACE

Much of the literature on health effects of bushfire smoke has focussed on respiratory and cardiovascular issues. However, similar to lungs, the ocular surface is exposed to the environment, including the ambient air, and is therefore, vulnerable. Ocular surface symptoms are commonly reported after exposure to bushfire smoke, with greater prevalence in those with pre-existing respiratory and eye disease.8,9 The only published literature available on the impact of Black Summer on eyes, reports eye irritation to be the most common symptom experienced by those exposed to the smoke. Of those surveyed in the Hunter/New England region during December 2019, 45% reported irritated eyes and this rose to 58% of those with history of asthma or respiratory illness.8 In the surveyed period, the PM2.5 concentration in ambient air in that region was more than four times the national air quality standard. In Argentina, 100% of ophthalmological patients and 85% of non-ophthalmological persons reported increased ocular symptoms during periods of reduced air quality due to bushfire smoke.10

There has been little research to date on how the ocular surface is affected by bushfire smoke. A single study, which published the impact on bushfire smoke on clinical markers of ocular surface disease, found that in persons without pre-existing eye disease, greater conjunctival redness and poorer tear stability occurred during periods of reduced air quality due to bushfire smoke.10 In those with pre-existing eye disease, there was also increased corneal and conjunctival staining with vital dyes. There was no change to tear production and conjunctival cell health in either group. Additionally, corneal abrasions have been commonly reported, especially through occupational exposure to high levels of smoke in emergency services personnel.13,14

LEARNINGS FROM OTHER POLLUTIONS

Learnings from exposure to other types of air pollution sheds light on how the ocular surface may be affected with repeated longterm exposure to poor air quality. Vehicular emissions and second-hand smoke are key contributors to air pollution and have similar constituents to smoke from bushfires. Increased dry eye disease occurrence and conjunctivitis, requiring visits to an eye care professional, have been commonly associated with increased traffic-related air pollution.15,16 A dose-dependent relationship has been found between scores on dry eye disease questionnaires (OSDI) and exposure to nitrous oxide in air from vehicular emissions.17 Severe conjunctivitis, such as vernal keratoconjunctivitis, has 1.52-1.72 times increased odds of occurrence, with elevated nitrous oxides and particulate matter concentration in ambient air.18

Learnings on how PM2.5 affects the lung mucosa can hint at possible impacts on the ocular surface. In lungs, presence of fine particles such as PM2.5 mounts an inflammatory response, resulting in loss of epithelial and goblet cells.19 PM2.5 is also capable of crossing the blood-gas barrier to be absorbed into blood vessels, resulting in increased systemic inflammation,19 which is believed to be responsible for increased cardiovascular events following exposure.

IMPACT ON OTHER PARTS OF THE EYE

The macula is also at risk of adverse effects from air pollution. An 11-year longitudinal study in Taiwan found that almost twice as many middle-aged people exposed to higher levels of nitrous oxides and carbon monoxide in ambient air will develop macular degeneration than those exposed to low-middle levels.21 Another group in Korea recently confirmed this association between exposure to nitrogen dioxide and carbon monoxide and development of age-related macular degeneration (AMD).22 Visual impairment due to self-reported AMD has also recently been associated with PM2.5 exposure in Canada.23 Oxidative stress has been postulated to be the link between AMD and air pollution. It is known to occur at a cellular level with PM2.5 exposure, and is believed to play a key role in pathogenesis of AMD.

It is unclear at this stage, whether air pollution is associated with development of glaucoma or retinal changes. Development of glaucoma has been associated with exposure to PM2.5 in several studies, with odds of 1.06-1.14 times reported.23,24 However, no or little clinically relevant relationship between PM2.5 and intraocular pressure has been reported. Similarly, changes to retinal thickness, including to the ganglion cell layer, have been reported in large population-based cohort studies,25 however the clinical relevance of these changes is not known.

Overall, there are significant ocular effects of air pollution and adequate research is necessary to identify the short and long term effects. Extreme climate events are predicted to increase in frequency due to global warming. It is hence important that eye care professionals are aware of the ocular disease risks posed by air pollution. Greater research is needed to understand what strategies can mitigate these effects.

Sukanya Jaiswal is an optometrist and is currently pursuing a PhD on the impact of bushfire smoke on eyes at the School of Optometry and Vision Science, UNSW. Her interests are in ocular surface disease and the various ways in which the environment can affect the ocular surface.

Blanka Golebiowski is an optometrist and Associate Professor in the School of Optometry and Vision Science at UNSW. Her research aims to understand the mechanisms of dry eye and eye pain, in order to inform the development of effective new treatments.

Isabelle Jalbert is an optometrist and Associate Professor in the School of Optometry and Vision Science at UNSW Sydney. Her research focuses on evidence-based eye care, eye care quality and health education.

The authors of this article are conducting research on the impact of bushfire smoke from Black Summer on occurrence of ocular surface symptoms and disease. They will be recruiting optometry practices across NSW, ACT and VIC to review optometry records to understand how the ocular surface was impacted from exposure to bushfire smoke. For further information, please contacts.jaiswal@student.unsw.edu.au.