Comprehensive diurnal intraocular pressure (IOP) profiles are key in ensuring that glaucoma patients receive the most appropriate care. According to recent research, the iCare Home self-tonometer demonstrates the ability to characterise diurnal IOP patterns accurately, within one week of using the device – making it a highly useful tool for modern glaucoma management. 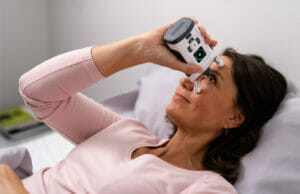 The study investigated daily peak IOPs, IOP fluctuations, and mean IOPs in patients with glaucoma and ocular hypertension using latanoprost and timolol. The effects of the medications were assessed by comparing mean percentage IOP reductions.

IOP measurement remains a fundamental component in the diagnosis and monitoring of glaucoma. However, current practices rely on single in-office measurements as the basis for choosing the appropriate treatment strategy.

According to Tong et al, IOP information recorded in this snapshot style, solely during office hours, does not show short-term IOP fluctuations and may fail to portray IOP peaks. Previous research shows that peak IOP measurements fall outside of office hours in up to 79% of glaucoma patients.2–4

This indicates that in-office measurements alone do not suffice to reflect diurnal IOP profiles adequately.

In the crossover treatment trial, 14 participants took self-measurements of IOP with the iCare Home tonometer four times a day, for one to four weeks, depending on which medication program they were on. IOP fluctuations reached a target reduction of 30% more frequently than peak and mean IOPs did on both latanoprost and timolol.

The study found that analysis of IOP fluctuation measured with self-tonometry was more consistent in evaluating target IOP, highlighting the importance of diurnal IOP profiles in ascertaining IOP responses to topical therapies. These findings also demonstrate that the iCare Home tonometer can characterise IOP variations appropriately, and be of significant use in clinical decision making.

According to the treatment trial, one week of using the iCare Home self-tonometer is sufficient to reliably portray diurnal IOP profiles. Furthermore, several previous studies show that at least 75% of patients can successfully learn to perform selftonometry using the iCare Home.5–7

This clinically promising figure is based on research on the world’s first self-tonometer, the iCare Home tonometer. Its successor, the iCare Home2 tonometer has been described as easier to use, with intuitive training materials, and able to measure IOP in both sitting and supine positions.

Tong et al recognise that the option of selftonometry in the supine position could be invaluable in investigating differences between medications in more detail.