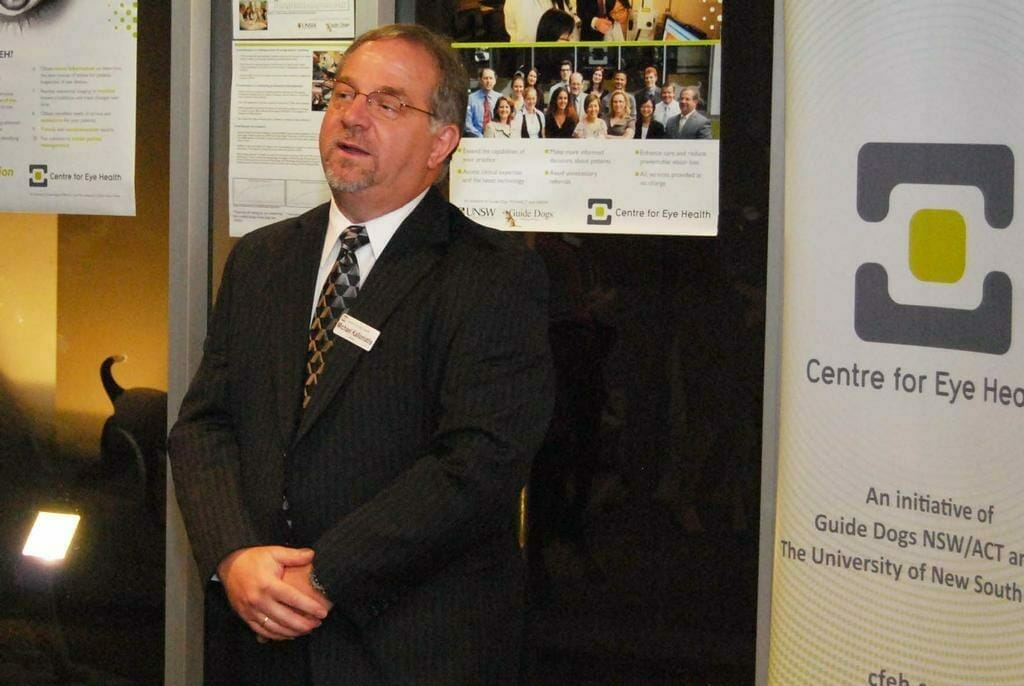 Prof Kalloniatis in 2012 as CFEH celebrated receiving 10,000 referrals for advanced imaging and assessment of people at-risk of losing vision in NSW and the ACT.

Professor Michael Kalloniatis has stepped down from the role of Centre Director at Centre for Eye Health (CFEH). Prof Kalloniatis led CFEH from its inception in 2008 as a joint initiative between Guide Dogs New South Wales (GDNSW) and University of New South Wales (UNSW) with the aim of reducing preventable blindness through the early detection of eye disease.

Prof Kalloniatis credited Barry Stephen and Andrew Pierce, who were Guide Dogs NSW/ACT (GDN) board members back in 2006, for being at the forefront in the conception of the Centre for Eye Health (CFEH). GDN CEO, the late Joe Fenucane and Associate Professor David Pye put the Centre in place.

“I was appointed in May 2009 and after consultation and planning, the Centre opened in December 2009,” Prof Kalloniatis explained. “We then began the hard road of figuring out what to do and setting up clinical protocols, relationships with optometry, ophthalmology, research and education programs and working with key stakeholders like SOVS, Prince of Wales Ophthalmology and GDN. Although we face continued challenges, these early years were absorbing as we slowly found our place in eye care delivery. I am grateful to the insightful GDN board members in the 2006 era for giving me the opportunity to develop CFEH.”

“As part of this journey, Barry as the chair of CFEH, was instrumental in guiding us and without his support the impact CFEH has had in eye care would not have been possible. I am particularly grateful for his guidance over the years until he recently retired: he made an enormous contribution to the to the Centre.  He has said in the past that ‘…..the quality of the staff at the Centre made it easy for me to maintain my enthusiasm and continuing commitment to helping the Centre develop as it has’.”

As Centre Director, Prof  Kalloniatis has overseen CFEH’s evolution and growth, from a concept into a Centre that is highly regarded both nationally and internationally for its clinical services, research and education.

In addition to collaborating with community optometrists, ophthalmologists and local area health districts to deliver such outcomes, CFEH has achieved international recognition through invitations to speak at national and international conferences and has produced hundreds of research papers with global impact. CFEH has also delivered undergraduate and postgraduate education with UNSW and developed and distributed educational resources to community optometrists around the world.

Reflecting on the Centre’s talent pool, Prof Kalloniatis said, “having worked in four other University optometry schools around the world, at all levels from a post-doctoral fellow, at different levels as an academic, and within the faculty, I would say the operational staff are exceptional, as are the clinical and educational staff.

“Despite having a clinical service focus, the staff with research responsibilities were able to obtain $3.6million in research grant funding over the years, primarily from national competitive grants through the National Health and Medical Research Council and they published over 100 peer-reviewed papers mostly in high quality journals.”

Six PhD students who undertook their studies at CFEH have graduated and continue to contribute to the profession and clinical care from one of three Universities (four at UNSW, one at the University of Canberra and one at King Abdulaziz & King Khalid University in Saudi Arabia). A further eight PhD students are either under examination or well into their PhD studies, offering the promise of more leaders in eye health emerging with a CFEH-based research background.

“Finally, it is fantastic to see how sought after our speakers are to national and international conferences and to hear how highly clinicians in clinical practice rate undergraduate students for their knowledge and practical knowledge of ocular imaging applied to eye disease after their CFEH rotations. The impact of CFEH education is at a local, national, and international level.”

Prof Kalloniatis thanked the staff of CFEH, “who have made the Centre known nationally and internationally, and the board of CFEH and UNSW who have given me the opportunity to lead over the past 12 odd years.”

In the next chapter of his life he said, “I am looking forward to spending more time with my 11 and 13-year old daughters, then focussing on CFEH-based research activity, and helping the next generation of CFEH-based PhD students to complete their studies as well as completing my NHMRC research grant obligations”.

A strategic review, initiated by CFEH founder and primary investor, GDN NSW, will see the Centre take a more targeted approach to reducing the incidence of preventable blindness.

GDN has committed to continuing its investment in early detection of vision impairment through CFEH. Provision of clinical services will continue but are expected to become more targeted to better assist patients with the highest clinical need. Future research and education programs at CFEH will evolve under the expertise of UNSW’s Faculty of Medicine & Health including the School of Optometry and Vision Science. A project group across GDN, UNSW and CFEH named Horizon has been established to map the future strategy of CFEH, ensuring it aligns with the mission of both GDN and UNSW.

“We are all looking forward to exploring new joint initiatives to positively impact outcomes for the blind and low vision community, including in capacity development, innovation and placement opportunities for our workforce in eye health,” says Sarah Holland, Executive Manager of CFEH and member of Horizon. “Though change is often unsettling, we are excited for the future of CFEH and look forward to working with our stakeholders and our community to positively impact the early detection space.

“Both GDN and UNSW are committed to ensuring that the expertise developed at CEFH over the past 12 years continues to develop and has a positive impact on both patients and industry. Early detection saves sight, and we are committed to reducing the incidence of preventable blindness for years to come.”