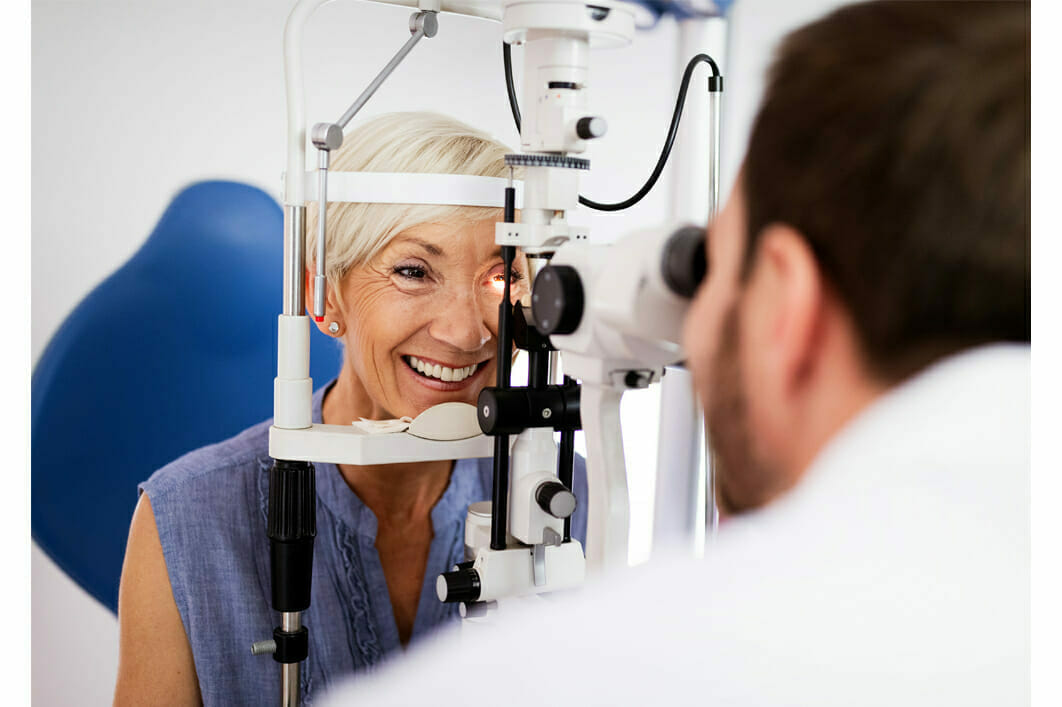 Advances in imaging technologies and visual field algorithms, combined with a greater understanding of the risk factors and nature of glaucoma, have improved the ways in which optometrists detect this disease.

THE BURDEN OF UNDIAGNOSED GLAUCOMA

Around the world, current estimates suggest that 50% of people with glaucoma are undiagnosed – a statistic that has not changed appreciably in the past three decades.1 This is no different in Australia, where large epidemiological studies have consistently shown this – from the Blue Mountains Eye Study in the 1990s to the National Eye Health Survey towards the end of the 2010s.2,3 Of an estimated 3-400,000 people in Australia,4,5 approximately 150-200,000 are undiagnosed. These studies also note that many patients who are found to have undiagnosed glaucoma have seen an optometrist or eye care professional recently, suggesting that despite the advances made in the understanding of the mechanisms and natural history of glaucoma, and in the technology and training available to optometrists, there has been relatively little impact on detecting undiagnosed glaucoma.

With access to reliable and repeatable measurement of retinal structure, guided analysis of progressive changes, and rapid functional assessments, optometrists have never been better equipped to detect previously undiagnosed glaucoma 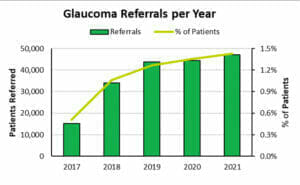 Diagnosis of glaucoma is, of course, made challenging by the insidious nature of the disease. Progression is usually slow, and for the patient, any vision loss, if noticeable at all, tends to progress almost imperceptibly. Furthermore, the range of variation in what is considered ‘normal’ ocular structure confounds the identification of glaucomatous structural damage by optometrists. When coupled with the fact that raised intraocular pressure (IOP) – historically accepted as one of the leading risk factors for glaucoma – is often not present (approximately one quarter of glaucoma referrals made by Specsavers optometrists cite raised IOP as a finding), it is easy to see why early detection of glaucoma poses a great challenge, even to the expert clinician.

In the decades since the publication of the Blue Mountains Eye Study, there have been numerous evolutions in the way optometrists detect glaucoma, with consistent improvements in imaging technologies and visual field algorithms, as well as our understanding of the risk factors and pathogenesis of the disease.

Computerised visual field tests have been a mainstay of glaucoma assessment for many years, and ongoing research continues to refine the algorithms used to test visual function. Recent years have seen the introduction of the SITA-Fast and SITA-Faster algorithms, both of which have reduced the time required for a visual field test without sacrificing accuracy in detecting glaucomatous visual field defects.6 Historically, the time taken for functional testing has previously been considered a barrier to thorough glaucoma investigations,7 and booking patients in for visual field testing on a separate day results in a significant percentage of patients (up to 30% by some estimates) being lost to follow up, hampering an optometrists’ ability to thoroughly workup those patients. However, with the SITA-Faster algorithm giving an average test time between two to three minutes per eye,8 it is eminently feasible to perform visual field testing as part of a thorough singleappointment workup for any patient for whom it is indicated, negating any risk of the patient not attending a follow-up visual field appointment.

By far the most impactful change to glaucoma detection in the past two decades has been the introduction of optical coherence tomography (OCT) into routine clinical practice. OCT has revolutionised the way optometrists investigate the optic nerve, allowing the investigation of fine structural changes that were previously impossible to detect.9 This in turn, has led to vast improvements in our understanding of the relationship between structural and functional damage in glaucoma.1,10

OCT has, unsurprisingly, quickly become an indispensable tool for optometrists investigating a wide range of diseases, perhaps none more so than when evaluating glaucoma suspects. However, its utility for glaucoma case-finding is likely greater than many realise. Historically, OCT has been employed as an onindication test to confirm a clinician’s suspicion of glaucomatous structural damage.11,12 However, OCT can detect structural changes with much greater fidelity than ophthalmoscopy, up to eight years before vision loss is present,13 and a single wide-field scan can provide enough structural information for an eye care practitioner to diagnose a glaucoma suspect.14 It is clear that OCT is of great utility in identifying potential optic nerve damage, and there is evidence that OCT may in fact detect progression in early glaucoma suspects more readily than perimetry.10,15,16 Despite this, the gold standard for diagnosis is still to combine structural and functional testing. This allows greater confidence in a glaucoma diagnosis, and may help to reduce false positive referrals.17,18

With access to reliable and repeatable measurement of retinal structure, guided analysis of progressive changes, and rapid functional assessments, optometrists have never been better equipped to detect previously undiagnosed glaucoma. With a shift in how OCT is applied to detect potential structural changes in very early glaucoma suspects, it is possible to vastly improve our detection of previously undiagnosed glaucoma.

Evidence of this can be seen in changes in glaucoma referral statistics over the past five years. In 2017, Specsavers optometrists in Australia referred 15,145 patients for glaucoma, representing 0.51% of all patients – well below the accepted population prevalence of approximately 1.5% of all patients, and 2-3% of patients over 50.1,3 As can be seen in Figure 1, glaucoma referrals have increased since then, both as a total number and a percentage of patients, even through the COVID-19-disrupted years of 2020 and 2021. In 2021, Specsavers optometrists referred 47,082 patients for glaucoma, representing 1.43% of all patients, far closer to the expected prevalence of the disease. 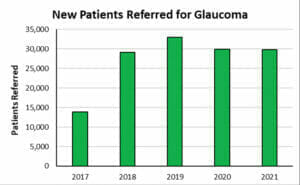 Clinically, the key change facilitating this increase was the introduction of OCT as a routine test in Specsavers practices. Capturing a scan for each patient allows optometrists to take advantage of OCT’s remarkable ability to detect structural abnormalities, and more readily identify patients with indications for functional testing, especially at early stages when these changes are not easily discerned on ophthalmoscopy. It has had the additional benefit of allowing detection of progressive structural change as patients return for review appointments over the course of several years.

It stands to reason that the significant increase seen in glaucoma referrals in the space of a few years would have an impact on the level of undiagnosed glaucoma in our patient base. There are several caveats to this that we must consider, including a need to account for patients who have been referred multiple times for ongoing care, and the potential for false positive referrals. The first of these can be accounted for by looking at the number of unique patients referred for the first time. Doing this, it is apparent that there has been a tangible increase in detection of new glaucoma cases each year (Figure 2). In 2017, referrals were made for 13,389 patients who had not previously been referred for glaucoma. In 2019, 33,022 new referrals were made, and close to 30,000 in both 2020 and 2021, despite the disruptions of COVID-19. Since 2017, a total of 135,618 unique patients have been referred for glaucoma.

It is also possible to account for the potential of false positive referrals through feedback received from ophthalmologists. From 2019 to now, this feedback indicates that just 14% of all glaucoma referrals from Specsavers optometrists are false positives. This compares very favourably with international studies (with up to 58% of glaucoma referrals from community optometrists found to be false positives in other countries).19–21 Taking this into account, it is reasonable to assume that, of the 135,618 unique referrals since 2017, approximately 108,000 are true positive referrals. As such, given the prevalence of glaucoma in the community, and the estimated number of previously undiagnosed patients, we estimate that Specsavers optometrists have detected more than two thirds of the previously undiagnosed glaucoma cases in our patient base.

Optometrists have never been in a better position to detect previously undiagnosed glaucoma. Employing OCT as a routine tool, with a scan taken for every patient rather than an on-indication test, allows for greater detection of suspicious or glaucomatous optic nerves. Improvements in visual field testing algorithms have markedly reduced the time required for functional testing, further aiding optometrists in their clinical workups. In turn, this is leading to more investigations of visual function and other risk factors, and more patients being referred for specialist assessment.

Over the past five years, referrals for glaucoma have greatly increased, with the detection of, on average, just over 30,000 new glaucoma cases every year for the past three years. This is making significant inroads into what has previously seemed the intractable challenge of detecting the undetected glaucoma among our patients. With an estimated impact to the Australian economy of AU$4.3 billion in 2025,4 we as an industry should not accept that 50% of glaucoma should remain undetected. By taking full advantage of improvements in technology and our understanding of glaucoma in recent years – and, importantly, by applying these in clinic in a way that maximises their utility – optometrists have the necessary tools, training and support at our disposal to detect the vast majority of patients with previously undiagnosed glaucoma.