‘Front loading’ visual field tests is a feasible approach to better understand a patient’s condition and disease progression, with minimal compromise to clinical workflow, according to a study performed by Centre for Eye Health (CFEH). 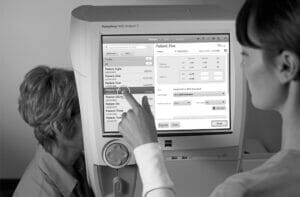 Since the release of the SITA Faster strategy in 2018, clinics with a Humphrey field analyser 3 (HFA3) have welcomed the benefits of reduced testing times and improved clinical workflow. With SITA Faster cutting visual field testing times by up to 50% (compared to SITA Standard), clinicians are now exploring ways to better utilise the time saved by their HFA3 to better understand the glaucoma state and progression of their patients.

To overcome the subjective and multi-factorial limitations of performing visual field tests, the CFEH explored the concept of ‘front loading’ or performing multiple perimetric examinations per eye in a single clinic visit. Given that two SITA Faster tests could be performed within the same time frame as one traditional SITA Standard test, CFEH investigated:

Of the 329 glaucoma suspects and glaucoma patients that were included in the study, it was found that over 90% of patients had at least one reliable visual field test result for each eye and approximately two thirds of patients had two reliable test results for each eye. It was also determined that global parameters, such as point wise sensitivity and probability scores, were very similar between the first and second tests.

Upon reviewing the results, it was determined that: