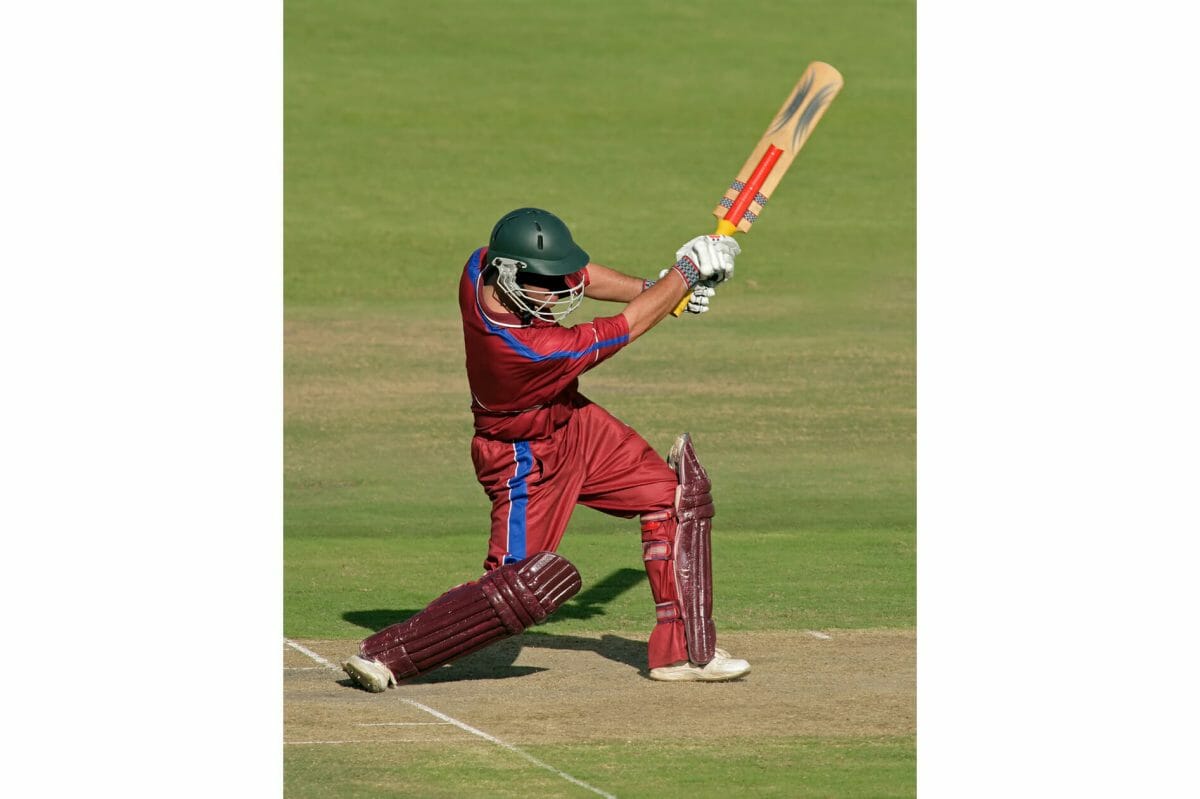 Do we need to focus on developing specific areas of the visual system, dependent on the sport being played? And in reality, how much difference can visual training really make to on-field performance?

This article focuses on scientific modelling for vision and sport and discusses a scientific approach to enhancing vision with the aim of optimising sports performance.

Gaze studies in sport have found that… one gaze, called the ‘quiet eye’, has emerged as a significant contributing factor to higher levels of sports performance 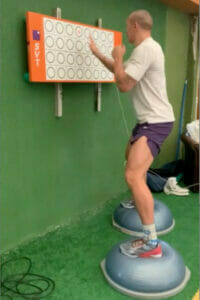 THE RELATIONSHIP OF VISION AND SKILLED MOVEMENTS

Skilled movement is not a spontaneous muscular response. Instead, it represents a sequence of complicated processes within the central nervous system. An athlete absorbs information from the surrounding sporting environment and processes this information. In response to what has been absorbed and processed, the athlete produces a movement.

This model of humans as information processing systems, originally presented by Welford,1 is commonly used to explain the role of vision in producing and controlling skilled movement. The model assumes that perceptual-motor performance occurs when sensory input information is converted into a purposeful output action. In between the input and output actions, information passes through the following three hypothetical central processing mechanisms.

Information from the perceptual mechanism is passed through to the decision mechanism, which decides the appropriate action. This mechanism is concerned with response selection and strategy formation. This can also be influenced by the athlete’s previous experience.

If the decision mechanism selects a motor response, the relevant information is passed on to the effector mechanism, which controls and organises the sequence of the desired movement. Neural commands pass from the central nervous system to muscle groups required for the movement. Through feedback, this mechanism can control a movement during its execution and evaluate the final result in a way which allows changes to be made in the future.

The first type of visual information processing involves reception of visual information and is affected by the ocular characteristics of the athlete’s visual system. The ‘hardware’ components of the visual system can be measured using optometric and orthoptic tests, and these form the basis for a sports vision eye examination. Since different sports require different visual skills, a ‘hardware eye examination’ should be designed specifically to meet the nature of the sport.

The second type of visual information processing involves the perception of visual information. This is influenced by the strategies an athlete develops through experience, which result in processing the incoming information more efficiently. ‘Software’ aspects of sports vision include information processing strategies, encoding and retrieving perceptual information from memory, extracting relevant information from both advance cues and ball flight cues, the use of anticipatory skills, visual-motor performance, decision making skills, and cognitive and perceptual learning. As is the case with designing hardware specific tests for athletes, specific software tests are recommended, based on feedback from the coaches, in terms of what they are aiming to achieve from sports vision software testing/training programs.

Using cricket as an example, a breakdown of the visual demands will be discussed using the hardware and software classification. This approach can be applied in a scientific manner, across all sports, and can help the sports vision practitioner identify what aspects of the visual system they are exploring. Furthermore, this approach is useful when discussing and explaining to coaches and sports scientists what aspects of vision they are interested in assessing to potentially enhance on-field visual-perceptual skills.

Cricket is an extremely visual-perceptual demanding sport, and therefore it is crucial that the batter obtain an exceptional high level of hardware functionality. This includes contrast sensitivity, static visual acuity, and binocularity (referring to heterophoria status, fusion amplitudes, and stereopsis) to produce symptom-free binocular single vision.

In a laboratory setting, quantitatively assessing eye movement patterns opens up possibilities for developing scientificallybased eye movement training programs. Saccades and, to a lesser degree, smooth pursuit movements, are produced during cricket batting. Land et al2 have shown that batters monitor the release of the ball and make a predictive saccade to the expected pitch of the ball, waiting for the ball to bounce and follow its trajectory for 100-200 metres after the bounce. When comparing players with different skill levels, they found a short latency for the first saccade distinguished good from poor batters (based on the skill level of the batters determined by the research study protocols). The study concluded that a cricket player’s eye movement strategy contributes to their skill. Furthermore, Kohmura3 concluded that early start of saccadic eye movement is one of the important factors in the accurate discrimination of a moving target at high speed (dynamic visual acuity).

Two neural pathways that commence from the occipital lobe and are also important to visually demanding sporting activity are the dorsal and ventral streams.4 The dorsal stream projects from the occipital lobe to the top of the posterior parietal lobe. The dorsal stream is responsible for orienting the gaze and sustaining attention at one location. It is also responsible for rapidly processing and updating information that is important for orientation in space and movement. The dorsal stream is also known as the ‘where’ pathway because it directs attention to locations in space.

The ventral stream conducts signals from the occipital cortex to the temporal lobe. It is also known as the ‘what’ stream and is associated with the cognitive processing of information and higher executive processes. As such, it is responsible for assigning meaning to objects and events, and it guides the anticipation and planning of actions. The dorsal stream processes information of short duration, but the ventral system requires time to carry out its role. Both systems send information to the frontal lobe.

Within the visual field, a line of gaze originates from each, passes through the appropriate field, and intersects in front of the two eyes. The line of gaze is defined as “the absolute position of the eyes in space and depends on both eye position in the orbit and head position in space”.5 Gaze control is defined as the process of directing gaze to objects within a scene in real time.6 A fixation occurs when the gaze is held on an object or location within three degrees of the visual angle for 100 milliseconds or longer.7

How gaze is controlled is best measured using eye trackers. Gaze studies in sport have found that of all gazes towards a location (fixations, smooth pursuits, saccades, and blinks), one gaze, called the ‘quiet eye’, has emerged as a significant contributing factor to higher levels of sports performance.8 The quiet eye is defined as a period of time when the fixation is stable on the spatial information that is critical to effective and consistent motor performance.

In cricket batting, there are numerous software skills that differentiate an expert from a novice, including advanced cue utilisation, pattern recognition, interceptive timing, fixation and visual attention. The cricket batter makes stroke selection decisions under severe temporal constraints in an open environment. To understand the decision-making processes, a model for temporal sequences and processing in batting is available9 and can actually be applied to many other fast moving ball sports. The sports science literature in this area is extremely well documented over many decades of research. It is crucial that sports vision practitioners be aware of these ‘software’ components. The future of sports vision training programs will come from this area of research and the equipment to best train these software components is highlighted further into this article.

Vision training for sport is the application of specific exercises, conducted over a period of time, that lead to neural restructuring of cortex and brainstem pathways. This allows a person to maximise efficiency while performing visual perceptual tasks, leading to enhanced visual motor performance.10

The first critical assumption before commencing vision training is that the athlete has had a customised and comprehensive hardware and software assessment. Based on the findings, any underlying ‘hardware’ deficiencies, such as convergence insufficiency, are treated with classical vision training techniques based on scientific principles of orthoptic and optometric vision training techniques. The next step, which is popular with optometrists, is to consider inoffice sensorimotor training using equipment such as the Senaptec sensory station, Sports Vision Performance from M&S, visual fitness by Visual Edge and EyeGym (these devices also offer testing modalities).

Advances in software technology in recent years have seen the development of a significant range of state-of-the-art digital training techniques. There are numerous commercial devices available to test and train the human software system. These include, and are not limited to, the following devices divided into the appropriate categories:

The sports science/sports medicine community provides evidence-based care for athletes, and it is critical that as eye care practitioners, we follow similar models.

A fundamentally scientific approach is key to developing effective and valid visual-perceptual programs for these patients.

If you are passionate about working with athletes, I hope this article has provided a scientific basis you can use when planning and discussing the options to offer professional sporting teams and individual athletes at all levels of sport.

With all the emerging digital vision training technology, I believe the future equipment of choice for eye care practitioners will be high resolution eye trackers that offer quick calibration, accurate measurements in all lighting conditions, instant biofeedback, and easy data analysis. This technology is rapidly moving from the laboratory research setting into clinical environments, and will become an essential tool for all eye care practitioners interested in assessing gaze behaviour in a dynamic or static sporting environment.

Pierre Elmurr BAppSc (Orthoptics) DOBA MAppSc (ExerSportsSc) is an orthoptist and sports scientist. He is the Director of Primary Eye Care in Burwood, Sydney. For the past 25 years, Mr Elmurr has conducted research assessing the role of vision training in aiding athletic performance. His scientific model for vision training in athletes is used globally by eye care practitioners and sports scientists.