An entertaining and informative book, celebrating the early history of optometry in New South Wales, has been launched at an event hosted by Optometry NSW/ACT (ONSW/ACT). 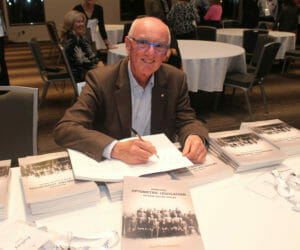 Achieving Optometric Legislation in New South Wales, was written by Joseph Chakman AM Bsc, who was the Chief Executive Officer of the Optometrists Association Australia (now Optometry Australia) from 1981 to 2011, and one of the Association’s few non-optometrist life members.

Mr Chakman’s book was launched at the Cruising Yacht Club of Australia to an audience described by Steve Zantos – optometrist and current president of the ONSW/ACT division – as the “illuminati of optometry”.

Welcoming guests to the event, Mr Zantos expressed his delight at being in the room with “people he has grown up with in optometry… leaders in the profession – many who had served as President or Directors of the Association, on the governance registration authority, at university, in the ophthalmic media and more”.

Mr Chakman’s book details the early history of a “proud” optometric association and its role in establishing legislation that applies to optometry today in New South Wales. Presented in chronological order, it includes excerpts from letters, advertisements, legislation, and articles in the media, from 1904 until soon after the passing of the Opticians Act in 1930. A second book delving into the ensuing politics surrounding optometry is to follow.

Acknowledging the effort that the profession’s predecessors put in to achieve “the optometric legislation and clinical privileges we have available to us today”, Mr Zantos said it was critical for history that the work and names of people who contributed to this achievement be recorded for future generations of the profession.

“This is what Joe Chakman’s work has done,” he said.

During an interview with ONSW/ACT’s Strategic Communications and Member Engagement Audrey Molloy, and CEO Andrew McKinnon, Mr Chakman admitted that he had never intended to write the book.

“Andrew (McKinnon) and I have shared a great interest in history for some time… (we often discussed the history of optometry). Eventually he said, ‘why don’t you write a history book’. I said, ‘not interested. I’ll do the research and pass it on to someone else who would write it’.”

A year later, when he found it difficult to identify a suitable writer, Mr Chakman looked at his notes and realised, “I just needed to put those bits together (in chronological order) and I would have a book”.

Driving him to complete the book were the people and events he discovered in his research.

Mr Chakman believes the Association’s contribution to the profession remains under-appreciated and hopes that the book will rectify this.

Speaking of optometry’s early decades he said, “I couldn’t help but be impressed with the nature of the people in the Association – people working as optometrists have an amazing amount of knowledge outside the profession and they have had an enormous impact on my life outside of work – they are people that know a lot and are wise. I can’t understand why optometry, for its small size, has managed to attract so many interesting people.”

Acknowledging the small number of optometrists who were instrumental in lobbying to legislate the profession of optometry, he said they were well supported with donations to fund advocacy, engage lawyers to help draft proposed legislation etc.

When asked why it took so long for the Opticians Act to be passed, Mr Chakman said the answer is evident in the book.

“Experience shows you and teaches you how to go about getting your political way – politicians are fickle, they don’t necessarily do what the community wants (or what is most sensible)”. Additionally, he said another impediment to change was that “the medical community dominates health… they argued the case against optometry and managed to hold up legislation from 1906 when the bill was first put up through to 1930.”

He said it was “amusing” that the health minister who passed the legislation in 1930 was an ophthalmologist.