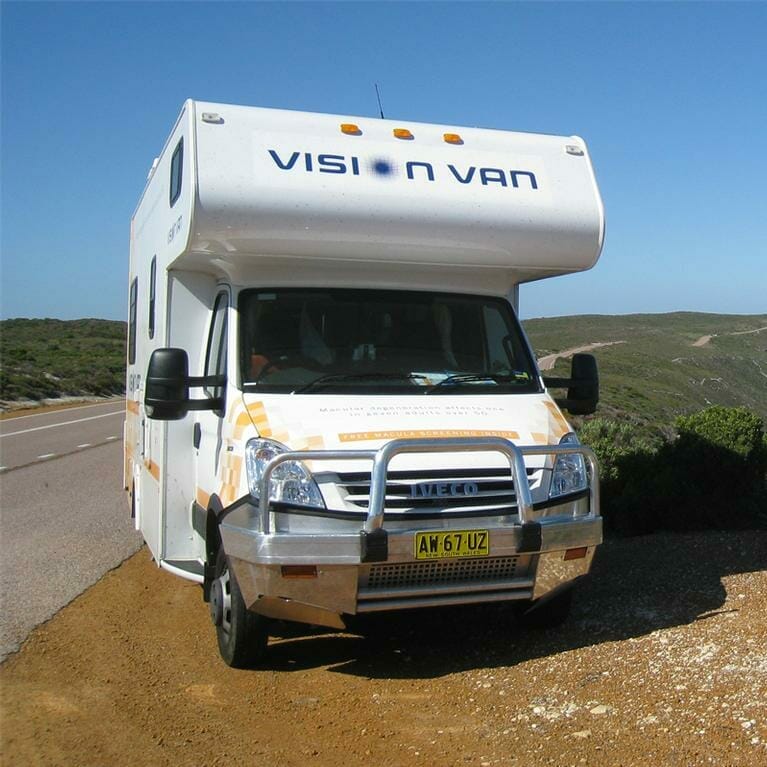 This was the conversation we overheard between a middle-aged couple who strolled past and noticed the signs on the Vision Van during one of our screening days. It’s no wonder 53 per cent1 of Australians over the age of 50 don’t know what macular degeneration is. Many don’t even realise which part of the body it is referring to.

During late September 2008, the Vision Van commenced its epic journey around Australia to screen for the leading cause of blindness, Age-related Macular Degeneration2. Covering six states, 37 regional and suburban locations, and 14,000 kilometres, the Vision Van screened more than 800 pairs of eyes for this debilitating condition. Equipped with the latest state-of-the-art non-mydriatic retinal camera, this motor home was transformed into a consulting room by day and an extremely comfortable homeon- wheels by night.

The Personal Impact of AMD

It’s difficult to grasp the enormity of the impact of AMD on a person’s lifestyle until you, or someone close to you, experience it. During our travels with the Vision Van, we met countless sufferers who each have a unique story to tell about how AMD has taken over their lives.

The most striking story, by far, was of a frail lady we met at a retirement village. She had lived in solitude since her husband had passed away many years ago. Like one third of Australians over the age of 501, the woman assumed going blind was a normal process of aging and didn’t pay any attention to the slow deterioration in her sight over the past few years.

The first thing she noticed was confusing the numbers on the bingo scorecard. She made excuses such as thinking she needed a new pair of reading glasses. She also started to make mistakes when playing bridge with her friends. She was a very competent player and could not accept that poor vision was causing her and her partner to lose.

The few things she enjoyed doing that kept her looking forward to each new day were quickly slipping away. The last straw occurred when she awoke one day to discover a large black hole in the ground, which went on to become a part of her day to day vision.

Terrified, the woman clung onto the door frame, refusing to take any steps.

Worried she was losing her mind, she stayed indoors for two days until a carer finally realised what the problem was and sent her straight to the hospital.

Diagnosed with wet AMD in one eye, and severe dry AMD in the other, she was told that her many years of smoking had most likely contributed to this condition.

Today, a caring ophthalmologist is now assisting her with treatments. She has regained some lost vision and by using larger sized cards, is able to play bridge competently once again.

A significant number of patients who were screened in the Vision Van made the effort to come because they were concerned about their parents’ and family hereditary of AMD.

We saw several cases in which both parents were AMD sufferers, whereas the patient had healthy maculae. While one would assume they have their genetics against them, the one common factor shared in all cases was that their parents were heavy smokers, while the patients were non-smokers.

The anecdotes shared with us by patients, support the overwhelming evidence of the detrimental effects of smoking3. According to the Macular Degeneration Foundation, smoking increases your risk of developing AMD by three to four times3.

One of the patients we met, recalled the time she suspected her mother’s vision was deteriorating. The first sign came when she noticed her mother’s house was gathering dust.

Being a pedantic and meticulous woman, whose top priority for her home was cleanliness, this was extremely out of character. While the mother insisted her sight was fine, in truth, she was extremely frightened. After noticing her mother using her fingers to feel for a needle that had fallen onto the ground, she knew she needed to be taken to an ophthalmologist.

The diagnosis turned out to be severe dry AMD, and although she is no longer able to cross-stitch, she admits she would rather go deaf than blind.

Macular degeneration is nondiscriminating. Besides having the local press visit and cover the Vision Van project, it is also not unusual for the Mayors of these towns to come by with words of encouragement. On one occasion, the local television station crew who were filming and taking retinal photos of a town’s Mayor, were shocked to see two dozen of soft drusen lying over both maculae. Surprisingly, as he wasn’t experiencing any symptoms, he hadn’t been to an optometrist for five years.

Throughout our 90 day journey, we met countless campers both on the road and at caravan parks. Most of them were retired couples, free of obligations and living life to the fullest. Some of them were on the road for several months at a time, experiencing the outback – every Australian’s dream.

The term ‘adventure before dementia’ was probably on the minds of most of these happy, adventure-to-the-hilt senior campers, even under the strain of the natural aging process.

Throughout this journey, we started to empathise more with seniors going through the aging process. Imagine how traumatising it would be to lose your vision to AMD, and having your driver’s license taken away, or letting go of the ‘great Australian dream’.

Optometrists will rarely see severely visually impaired patients visiting our practice without any prior knowledge of their sight problems. Most will already be under the care of an ophthalmologist. However, we are often the first port of call for patients with signs of borderline to moderate AMD.

On the Vision Van journey, we made close to one hundred new detections of abnormal macular changes. Rather than waiting for the onset of experiencing symptoms, these people are most in need of a thorough explanation of the potential problems that a dozen macular drusens can create. This is the time when lifestyle changes can make a significant difference to their prognosis.

As optometrists, it’s our duty to spend adequate time with each patient to ensure they leave us knowing exactly what lifestyle changes they need to make, in order to reduce their risk of further deterioration.

Of the 15 minutes we had with each patient, we dedicated at least five minutes to explaining the differences between both macula and macular degeneration, how they can reduce their risk, and how often their eyes need to be checked. I’ve heard too many stories of patients who have unbeknownst to them, left it too late to receive any form of beneficial treatment.

We hope the Vision Van project has helped to etch the term, macula, rather than muscular, into the minds of more people. We believe our personal account of this wonderful and memorable journey will inspire you to explain the health of your patients’ maculae, reminding them that the optometrist is their partner in eye health, not merely a provider of eye glasses.

If we all contribute to increasing public awareness of AMD and the optometrist’s role in this area, our aim to encourage more Australians to become more discerning of this debilitating condition will be achieved.

Li Wen Chen is a qualified optometrist with three years of clinical experience. She has worked as a practice manager as well as a locum optometrist, and has a special interest in ocular disease and contact lens fitting. Paul Chen comes from a corporate background, where he has worked in marketing and human resources.