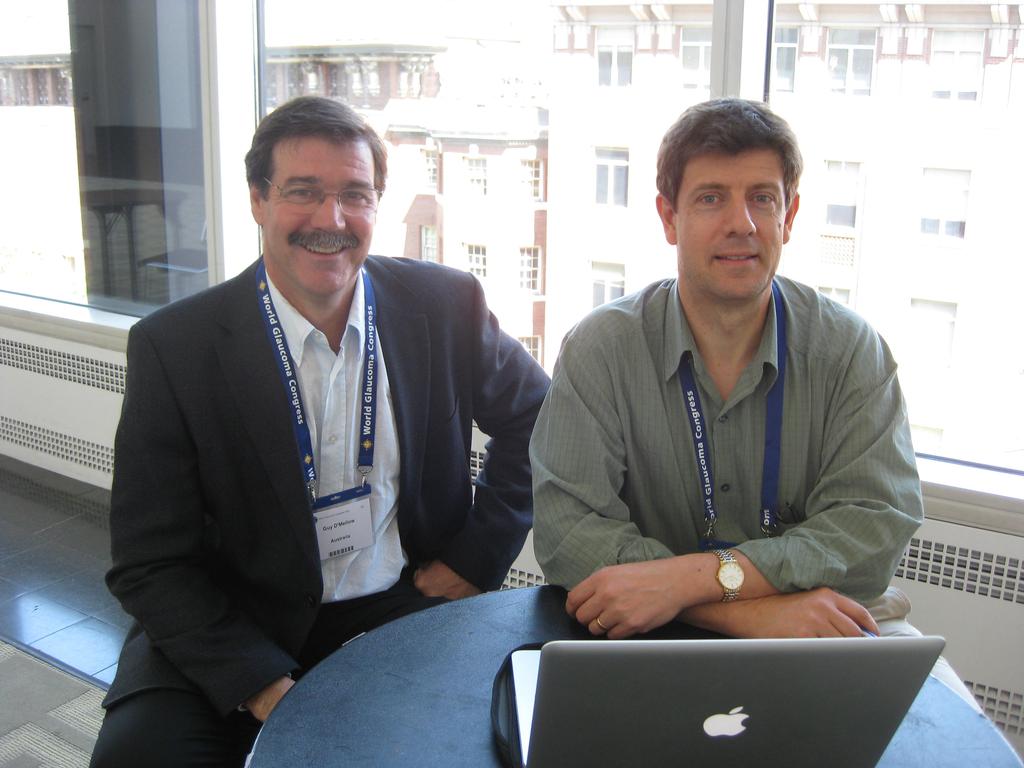 The World Glaucoma Association brought together over 75 national and supra-national glaucoma societies for the biennial World Glaucoma Congress (WGC). This year, more than 2500 delegates convened in the city of Boston, U.S. making the third WGC the largest glaucoma meeting held to date. In line with its support for continuing medical education, Pfizer Ophthalmics invited four Australian ophthalmologists to report the latest developments from this intensive scientific congress. The following article contains selected excerpts from the team’s reports, covering a range of topics from basic science to clinical glaucoma care.

There are a number of different types of screening. Universal screening targets everyone in the population in a particular age or risk group, but there are problems getting people who screen positive into medical care. Fifty per cent will come in for definitive testing and treatment, another 25 per cent will come if coaxed and 25 per cent will never come. It is therefore important to carefully choose which group to screen, such as those over 65 years or with a family history of glaucoma.

The other type of screening, which occurs at an ophthalmologist’s or optometrist’s office, is called opportunistic screening. It only seeks to screen people who are already presenting for another reason. This approach is usually cheaper and easier, although it targets fewer people.

The type and focus of the tests used to screen for glaucoma were also discussed. While diagnostic tests often focus on high sensitivity, which correctly diagnoses those who have glaucoma, screening tests need to focus on high specificity to correctly identify those who are normal. While this may not sound logical, the main problem with screening for a rare disease is the large number of normal people who are unnecessarily referred for diagnostic testing. The other important focus is on the stages of glaucoma where the risk of blindness is higher, include moderate to advanced disease and glaucoma with higher intraocular pressure (IOP).

“Like angle closure, rates of glaucoma are high in pseudoexfoliation syndrome and the disease is more likely to cause blindness.”

Myopic subjects have a two to three-fold increased risk of developing glaucoma compared with non-myopic counterparts, independent of other glaucoma risk factors including IOP. Assessing the status of the optic nerve and visual field is frequently more complicated in these eyes making clinical management more difficult and filtration surgery more complicated.

Various studies have demonstrated a strain gradient on susceptible retinal ganglion cell axons that stabilises during the young adult years once the eye has grown. Clinical changes are seen during the ‘growth’ phase but are non-progressive once the myopic eye matures. Retinal nerve fibre layer (RNFL) thickness, measured with optical coherence tomography (OCT), is inversely related to the refractive status with eyes of -16D having a significantly thinner RNFL than those of -1D. The presence or absence of laminar dots in the nerve head is a useful clinical sign identifying areas of damage. The absence of retinal pigment epithelium can thwart OCT imaging and render the statistical analysis unreliable due to the lack of myopic discs in the normative database. However serial scans can be helpful to monitor for progression if the initial scan is used as an individualised baseline.

Dr. Singh reported results from a series of young myopic Chinese students with optic disc and visual field features ‘diagnostic’ of glaucoma. The disease course was nonprogressive and the authors postulated that damage was due to mechanical stress during adolescence and the early twenties that subsequently ceased. As young myopic eyes are at an increased risk of hypotony following filtration surgery it was recommended that these eyes be followed carefully before deciding on surgery, as their natural history appears to be more benign.

Dr. Michael Kass opened this thoughtprovoking session by posing the question: “Why was the Ocular Hypertension Treatment Study (OHTS) conducted?”. As earlier studies had provided no clear evidence of the protective role of IOP reduction, the OHTS was set up to answer this question, to assess the safety and efficacy of topical anti-glaucoma medications and to determine the demographic and clinical details that might indicate increased risk for the onset of glaucoma damage. The goal was an IOP reduction of ≥20 per cent.

Dr. Linda Zangwill addressed the same issue with the Heidelberg retinal tomograph (HRT) – both for detection of damage and for prediction of progression. The HRT offers both event and trendbased assessments of disc structure, providing both topographic change analysis and quantification of various stereometric parameters such as neural rim area. Baseline measurements predict future structural and functional changes. However, Dr. Zangwill pointed out that there were very limited data to support the use of structural change rate as a predictive indicator of functional loss.

In attempting to identify progressive damage, an event analysis detects a change from baseline that exceeds a pre-determined threshold; hence fewer tests are necessary over a shorter period of time. In contrast, a trend analysis quantifies the rate of any progression and is clinically more useful as it helps to identify those patients at particular risk of visual disability but requires more tests over a longer period of time. Both event and trend analyses are necessary for the clinician to use in practice.

The initial treatment paradigm of medical therapy followed by laser then incisional surgery in open-angle glaucoma seems well established. However each has potential benefits and pitfalls that make periodic reassessment of the paradigm sensible. Dr. Francisco Goni reviewed various studies that compared treatment vs. no treatment; medication vs. laser; medication vs. surgery; and medication vs. laser vs. surgery. The development of prostaglandin analogues and other new medications makes it difficult to compare laser with medication as earlier randomised controlled trials such as the Glaucoma Laser Trial predated these medications. These earlier studies suggested laser trabeculoplasty as being slightly better than medication for up to approximately two years after treatment.3 Notably, four trials that have compared medication with surgery have been heterogeneous and difficult to compare, particularly since most were conducted in the pre-prostaglandin era.4

In defending medication as the first choice of treatment in glaucoma, Dr. Daniel Grigera highlighted that initial treatment needs to be applicable to all, effective in the long term, cost-effective and have tolerable side effects. He asserted that modern medication achieves all these criteria. The argument for laser therapy as primary treatment was presented by Dr. Tony Realini, who cited compliance, side effects and cost in favour of laser. Dr. Greg Skuta proposed surgery as the initial treatment for glaucoma, quoting the Moorfields Primary Treatment Trial that showed lower IOP and less visual field loss in the surgical arm compared with medicallytreated subjects.

This comprehensive coverage of the topic clearly outlined two points; firstly, there is an obvious need for data that compares newer medications with newer laser techniques. Secondly, a more effective patient and surgeon-friendly laser technique is needed. The importance of individualising therapy in glaucoma cannot be overemphasised, based on severity of disease, rate of progression, projected lifespan, tolerance to therapy, and patients’ wishes amongst other factors. Each of the three approaches may be appropriate for initial therapy in an individual circumstance. Currently, medication will remain the initial choice for most patients.

Note: This article contains selected reports from data presented at the WGC 2009. To obtain complete reports or for information on how to receive reports from Eye on WGC, please send your request to: nicole.nader@pfizer.com.

Disclaimer: This material is provided for educational purposes. It contains reports from data presented at an international meeting. Accordingly, some reported uses of Xalatan, Xalacom and other named products may not be registered or representative of the approved Australian Product Information (PI). Please refer to the published approved PI before prescribing any product mentioned in this report. Although the opinions expressed herein do not necessarily reflect those of the sponsor or publisher, both parties have made every effort to ensure that the authors’ opinions are accurate, fair, balanced and consistent with the general body of information.