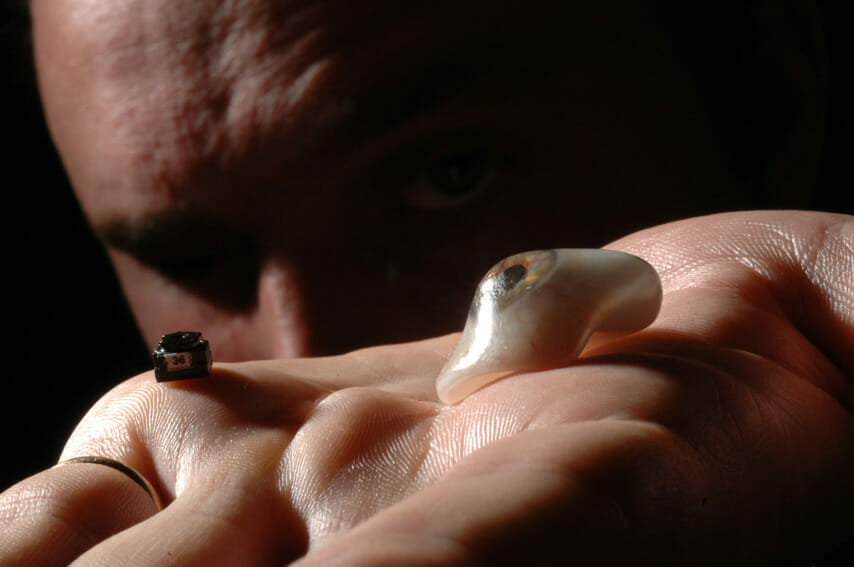 Spence worked with a team of eye specialists and engineers to develop the eye-camera which was recognised last year by Time magazine as one the year’s 50 best inventions.

The 36-year-old is now working on a documentary called ‘Eye 4 an Eye’ using footage from the eye-camera. Last month he was in Australia to unveil his new invention and demonstrated the camera at a Melbourne film festival.

Spence, or ‘Eyeborg’ as he calls himself, damaged his eye as a teenager after mishandling a gun and has been blind in the eye for years. He was eventually advised to remove the eye.

The camera isn’t connected to his brain, and so hasn’t restored his sight. But he has, in effect, become a bionic man, in that the technology has fused with the human body.

He immediately set about finding the experts who could help him fit a camera to his eye socket. He recruited ocularist Phil Bowen, from Toronto, who made the ocular prosthetic; avionics systems engineer, Kosta Grammatis and Martin Ling, who has been developing miniaturised and low power sensor devices at the University of Edinburgh since 2004, including the world’s first fully wireless, full-body inertial motion capture system.

The camera, which is continuing to be refined, is essentially a 1.5 millimetre-square low-resolution video camera, a round circuit board, a video transmitter and a three-volt rechargeable battery, all contained in the clear acrylic used to make prosthetic eyes.

The camera isn’t connected to his brain, and so hasn’t restored his sight. But he has, in effect, become a bionic man, in that the technology has fused with the human body.

Spence says the footage quality is similar to that of a phone camera.

“The aesthetic, oddly, is very similar to the point of view of the Terminator from the first Terminator film, including a slight wavering of video, which is actually now part of film language to talk about surveillance and cyborgy stuff,” Spence says.

Spence says he’s not interested in documenting his life but is instead working on the ‘Eye 4 an Eye’ documentary using footage from the eye, exploring “the literal point of view” and the convergence of cyborgs, video surveillance and privacy.

He says people either find the idea of the eye-camera ‘creepy’ or ‘fascinating’.

“I could do undercover stuff. I think people have done good work with undercover cameras, although I know there are ethical issues. It scares people even though they’ve probably just walked down a street and been filmed five or six times on security cameras,” he said recently.

For more information on ‘Eyeborg’ and Rob Spence’s ‘Eye 4 an Eye’ documentary go to: www.eyeborgblog.com.