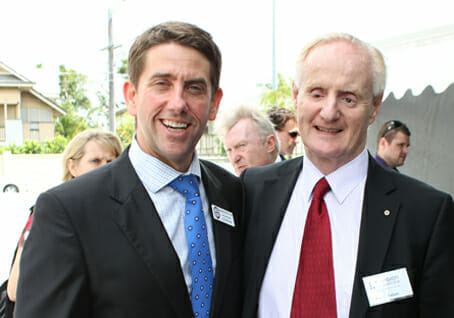 Two great Australians impacted by blindness have been recognised in the Australia Day honours list. Professor Ron McCallum, deputy Chair of Vision Australia was awarded 2011 Senior Australian of the Year.

Mr. Simon McKeon, a director of World Vision and Executive Chairman of Macquarie Bank’s Melbourne Office, has been appointed 2011 Australian of the Year.

Prof. Mc Callum plans to use his role as Senior Australian of the Year to encourage Australians to think more about minority groups and people with disabilities. In the Sydney Morning Herald, he is reported to have said, “We are not just some form of sub species, we have to be included as part of the human family… we all have a right to a place and a profession.”

Prof. Callum AO was the first completely blind person to be appointed a full professorship in any field at any university in Australia or New Zealand.

In this capacity, he inspired Mr. Cameron Roles, a former student who is also blind, to become a lecturer at the ANU College of Law in Canberra. “I was inspired to become a university lecturer because of Ron’s remarkable career. He is an outstanding and charismatic lecturer and he’s always happy to give advice and encouragement,” said Mr. Roles.

In 2008, Prof. Mc Callum was elected to the inaugural Committee of Experts which overseas the United Nations Convention on the Rights of Persons with Disabilities. At its inaugural meeting in February 2009, he was made general Rapporteur for the Committee, and at its second meeting in October 2009, unanimously elected as 2010 Chair of the United Nations Committee on the Rights of Persons with Disabilities. On 1 September 2010, Prof. McCallum was re-elected in New York to the Committee of experts for a four year term which will conclude on 31 December 2014. He is Chair of Radio for the Print Handicapped of New South Wales Co-Operative Ltd and was Chair of the Disabilities Council of New South Wales on an interim basis until 31 December 2010.

Speaking of Prof. Mc Callum, Ms. Maryanne Diamond, President of the World Blind Union, and General Manager Stakeholder Relations, Vision Australia said, “Ron is an inspiration, wise, a good person, but most of all, to me, a very good friend.” Ms. Diamond, who is blind, has worked with Ron on a world stage to advocate for the needs of people who are blind or have low vision.

Mr. McKeon, who performs his Macquarie Bank role on a part time basis, is also Chairman of CSIRO and Business for Millennium Development, an organisation that encourages businesses to engage with the developing world. He spends much of his spare time supporting a range of causes and organisations including the Global Poverty Project and Red Dust Role Models, which works with remote Indigenous communities. He also volunteers as a counsellor for heroin addicts.

A multiple sclerosis sufferer for the past ten years, Mr. McKeon has suffered paralysis and blindness, episodes which he has reportedly said “gave him the inspiration to keep fighting for what mattered.”

Mr. McKeon was the founding chairman of MS Research, a position he held until recently, and has been a director of World Vision for 15 years.

The newly anointed Australian of the Year has called on big business to give more to charity and for Australians to turn their minds to the plight of Indigenous Australians.

Mr McKeon has called on Australian business to give more to charity and to ‘turn their minds to the plight of Aborigines’. In an interview for the Sydney Morning Herald, he said, “I think there are many ways in which corporates these days can share their expertise, their people, their facilities and, of course, a bit of money as well … Of course they can give more.”