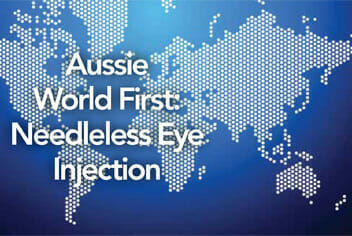 Human trials of a needleless eye injection could begin as early as next year, with Australian researchers confident their groundbreaking device will revolutionise treatment of a range of eye diseases.

The Centre for Eye Research Australia (CERA) and Seagull Technology Pty Ltd have developed a prototype device that uses an innovative combination of nanotechnology and ultrasound energy to inject drugs into the eye without using a needle.

This world-first could make injections into the eye a thing of the past.

CERA Research Fellow Dr. Paul Connell said the device has been developed over the past few years, and is currently being trialled on animal models.

Depending on how efficacious it is, with different designs and adaptations in the formulation to suit, it has the potential to change drug delivery for other conditions, such as diabetic maculopathy, uveitis, and any other disease related to leakage or new blood vessel formation at the back of the eye

“The prototype is driven by ultrasound energy through a hand piece, connected to a head set. The drug is in a gel substance and when we apply the ultrasound energy it propels the drug out of the gel and into the eye.

“The white part of the eye – the sclera – has a rich vascular supply. The ultrasonic energy makes the eye even more vascular so it is more able to absorb the drug. The energy also changes the configuration of the drug, causing a wave type ripple and the drug is pushed out of the gel into the eye,” Dr. Connell said.

Dr. Connell said the most obvious benefit would be to patients with age-related macular degeneration (AMD), who require frequent injections into the eye as part of the disease management.

AMD is the leading cause of blindness and severe vision loss in Australia. Of the two common forms of AMD, wet AMD is the more serious of the two and is often characterised by rapid vision loss.

The disease is currently treated by injecting the eye with anti vascular endothelial growth factor (anti-VEGF) drugs. While the treatment is effective in slowing or stopping the progression of AMD, injections must be administered regularly, are typically painful and require surgical administration.

“Some patients tolerate the injections (into the eye) very well, but others find it very difficult and the problem is that you have to have them for the rest of your life to manage the disease. It is quite intimidating.”

Dr. Connell said penetrating eye injections carry risks of infection in the eye itself, or retinal detachment, so researchers began looking at ways of getting the drug into the eye more safely.

“Ultrasonic energy is already used in eye surgery and cataract surgery so we think it will be safe on the outside of the eye.”

He said the prototype, to be used initially on animal models, is “quite advanced” and he anticipated small pilot studies on human patients to begin in early 2012.

“Depending on how efficacious it is, with different designs and adaptations in the formulation to suit, it has the potential to change drug delivery for other conditions, such as diabetic maculopathy, uveitis, and any other disease related to leakage or new blood vessel formation at the back of the eye,” he said.

Dr. Connell said that in the future, the needleless device could be used in clinics by nurses, or perhaps even by patients themselves, which would make a “big difference to patients”, particularly those in rural and remote areas and take pressure off the hospital system.