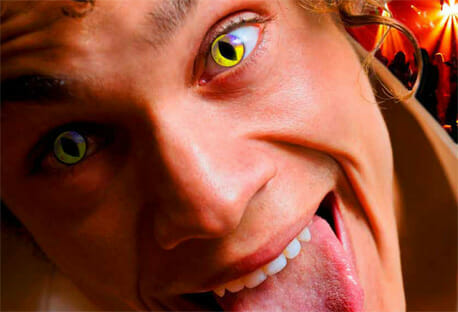 Colour contact lenses are one of the fastest growing segments in the global contact lens market. For many consumers who buy their lenses online or from unlicensed vendors, they’re also a fast track to the ‘eye hospital’. However, eye care professionals who dispense quality colour contact lenses, along with sound patient care, can save eyesight and build a strong new revenue stream for their practice.

Women have worn lashings of make up, lengthened their eyelashes, sculpted their eyebrows and selected striking frames to draw attention to the ‘windows to their souls’ for hundred of years.

Now, women… and men as well, are going straight to the heart of the matter and wearing cosmetic contact lenses to enhance, expand and colour the iris.

Not only that, they’re using CCLs to get creative… with stripes or speckles of luminous colour, cats eye designs, Christian Dior logos, even freaky Vampire lenses of dazzling gold…

In the absence of effective state and territory legislation to prevent unlicensed retailers selling contact lenses, public education is essential…

As if that isn’t enough, some manufacturers have begun to offer lenses with messages and cartoon images printed to order. These make the circle contact lenses inspired by Lady Gaga look positively dull!

Yet for those who don’t understand how to safely wear colour contact lenses, the risks of doing so can be high.

Lu Yanyun, director of the Optometry and Glasses Center at Beijing Tongren Hospital in China, who has seen a large amount of eyes injuries as a result of specialty contact lenses, says that compared with ordinary contact lenses, coloured lenses carry greater risks of ocular irritation, redness and infection.

Due to the layer of tinted colour, these specialty lenses are thicker and harder than ordinary contacts, and additionally are less permeable, which can lead to the eyes being deprived of moisture and oxygen, Lu explains.

When the eyes, mainly the cornea, are deprived of water and oxygen, cells die and blood vessels dilate, causing syndromes such as itchiness and bloodshot eyes.

Moreover, death and slow reproduction of certain eye cells, such as the epithelial cells of the cornea, make the eyes vulnerable to viruses and bacteria, says Pan Zhiqiang, a cornea disease specialist at Beijing Tongren Hospital.

“Once the epithelial cells die in large numbers it is like the door of the inner part of the eye is forced open and microorganisms can enter the inner eye, causing infection and other complications,” Pan explains.

In some extreme cases, if the dead cells are endothelial cells, the damage is irreversible.

“The number of endothelial cells is fixed when we are born. Once they die, the loss is permanent,” Pan says.

Despite this, in Australia, consumers are almost encouraged to take unnecessary risks when purchasing cosmetic contact lenses. CCLs are freely available online and, in many states of Australia, over the counter at fashion and discount stores, even petrol stations and Royal Shows.

For the average cash strapped, time poor 20-something party goer who simply wants to add a little glam to their eyes before a big night out, the local shop is an easy option – far easier and cheaper than booking in for
a fitting with an optometrist.

Yet the costs of purchasing cosmetic contact lenses online or over the counter of fashion shops can be high – far higher than a trip to the optometrist. Global research confirms that people who wear CCLs are at greater risk of experiencing acute vision-threatening problems than those who wear prescription contact lenses.

Another study, this time from France, observed 256 patients and showed that the relative risk of contact lenses related microbial keratitis (MK) is highly increased with cosmetic contact lenses (CosCL). 32 – or 12.5 per cent of patients – were seen for MK after wearing CosCL. Compared with CL, CosCL wearers are younger (21 versus 27 years of age) and recent wearers (three versus nine years).

The study found that cosmetic contact lenses were rarely dispensed by eye care professionals, increasing the risk of MK (OR, 12.3). Education about lens care and handling was deficient for most of CosCL wearers (OR, 26.5). 60 per cent of CosCL cases versus 13 per cent of CL-related MK had a final visual acuity less than 20/200.2

Director of Professional Development at Johnson & Johnson Vision Care, Luke Cahill, said these reports and others, confirm his concern for consumers that buy cosmetic lenses from unlicensed vendors. “Often, these people don’t receive the advice they need to safely wear contact lenses – they don’t know how to clean their lenses properly or how long they should wear the lenses before removing them. Worst of all, some people think it is acceptable to share lenses.”

Indeed, The General Optical Council in the UK has received reports of lenses being shared between wearers and sales staff who demonstrated fittings on themselves before offering the lenses to the purchaser.3

“The Health Practitioner Regulation National Law Act 2009 states (under section 122 of the act) that you have to be an optometrist (or trained medical practitioner) to write out a script for a contact lens, but there is nothing to stop anyone from actually selling CCLs.

“It’s state and territory responsibility to protect consumers in these instances, and that varies from state to state… There is a need for change to protect the consumer.”

Joe Chakman, CEO of the Optometrists Association of Australia (OAA) says that for many years, the OAA has lobbied government to legislate to control the sale of cosmetic contact lenses. However, while some states have taken action, others refuse to budge. “We have eight different governments plus the federal government and they all have their own legislation,” said Mr. Chakman.

Tony Martella, CEO of the OAA in Western Australia agreed. “People who experience problems with their cosmetic contact lenses don’t often present to an optometrist – they go to their GP or the hospital, so it’s impossible to quantify the numbers,” he said.

Currently Queensland, South Australia, Tasmania and the Australian Capital Territory have prohibited the sale of contact lenses unless a current script, written by an optometrist or General Practitioner is provided. Heavy penalties apply to vendors in those states who supply CCLs without a script. In New South Wales, cosmetic contact lenses can only be sold through optometrists. In Victoria, Northern Territory and Western Australia, there are no regulations against the sale of plano cosmetic contact lenses, however a script is required for vision correction.

“Unfortunately it is still legal for cosmetic contact lenses to be dispensed without a script in Victoria,” said Terri Smith, CEO of the OAA in that State. “But our view is that any contact lens – whether plano or prescription, should only be supplied with a script, because that allows a health practitioner to educate the customer – to explain the safety issues and consequences of not using contact lenses properly.”

Ms. Smith said that while the OAA in Victoria has been lobbying government for some time, they’re not yet close to having the law changed. “Often our issues are perceived to be small compared to issues such as the hospital funding. Even getting cosmetic contact lenses on to the agenda is difficult. But we continue to work at it. We raised the issue recently with our State Health Minister.”

Andrew Lim, a Business Consultant with NovaVision agrees that education is essential, but he says that part of the problem lies with optometrists who are not interested in stocking and dispensing colour contact lenses. “Every time I walk into an optometrist and express interest in CCLs, I am given a look of disgust and disinterest.

“I’ve been told by many students of optometry that CCLs are bad. I’ve asked them why they believe that to be the case and they simply say, ‘we were told so’.”

In fact, he says, the industry should embrace colour contact lenses, both as a way to promote eye health to the greater public and as an opportunity for add-on sales.

He predicts the growth of the CCL market could mirror that of sunglasses.

“Thirty years ago sunglasses were just sunglasses. You wore them to reduce the effects of the sun and that was it. Fast-forward 15 years and sunglasses became a ‘must- have’ accessory,” said Mr. Lim.

For that reason alone, he says optometrists should embrace CCLs as a future revenue stream.

“Instead of selling your customers an eye check and a pair of glasses or contact lenses, next time, offer them plano CCLs to wear with their glasses and CCLs with vision correction for the days when they don’t want to wear their frames.”

The Last Word: Definition of Success