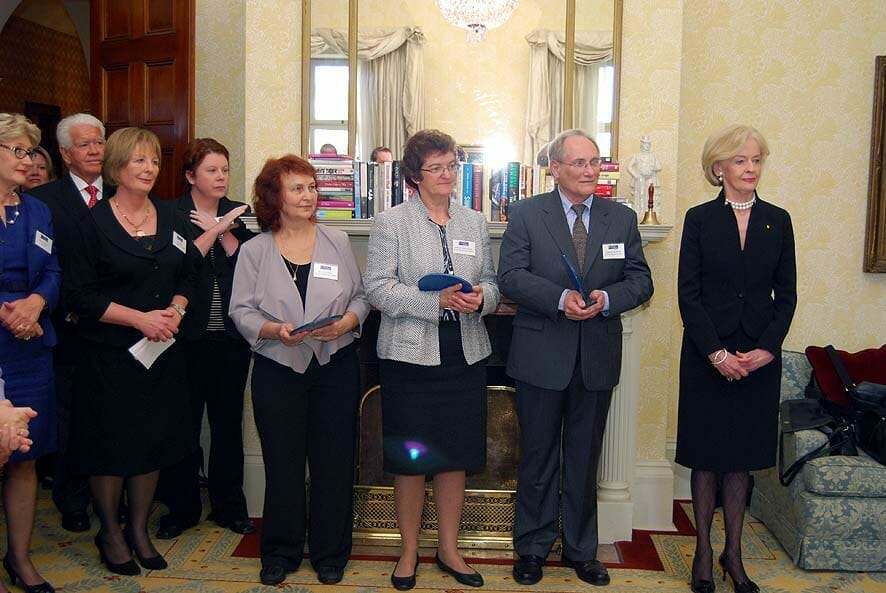 (Click below to view a video of the award presentation)

It has been estimated there are 284 million people worldwide who are visually impaired. 39 million are blind and 245 million have low vision. 90 per cent live in developing countries where cataracts are the prime problem…

The Governor-General of Australia, Ms. Quentin Bryce AC, announced the grant winners at a special ceremony at Admiralty House in Sydney on 13 October. In attendance were the grant winners and members of the optical profession as well as The Hon. Jillian Skinner, MP; Ms. Jean Kittson, the Macular Degeneration’s Foundation ambassador and Mr. Jan Utzon, the son of the late Jorn Utzon, architect of the Sydney Opera House, who had Macular Degeneration.

In her address, Ms. Bryce said: “It has been estimated there are 284 million people worldwide who are visually impaired. 39 million are blind and 245 million have low vision. 90 per cent live in developing countries where cataracts are the prime problem.

“One of the tragedies of our time is that 80 per cent of all visual impairment can be avoided.” In most cases, the Governor General said, “prevention, or cure, is possible – just not accessible.”

Ms. Bryce said the work of the MD Foundation is critical in raising public awareness of the disease and slowing its prevalence. She thanked Dr. Beaumont, a “champion” of the MD community education program, who along with his colleagues has been passionate in his research pursuits and advocacy on behalf of MD patients. Ms. Bryce also acknowledged the Foundation’s “mighty outcomes during its short existence” and said that “Australia is now a leader in public awareness of macular degeneration.”

The Governor General paid tribute to the Foundation’s ‘persuasive’ advertising, patron Ita Buttroses’ cook book entitled ‘Eating for Health’ and the Vision MD screening van, which she said “are all innovative tools in the campaign”.

Ms. Bryce also acknowledged the value of the Deloitte Access Economics Report which was commissioned by the Macular Degeneration Foundation and led by Lynne Pezzullo. The report provides the most current, comprehensive compilation of Macular Degeneration statistics and latest research ever undertaken in Australia.

Speaking of the report, Macular Degeneration Foundation CEO, Julie Heraghty said, “The Macular Degeneration landscape has changed significantly over the past decade; primarily with dramatic improvement in treatment and new insights into the role of diet and genetic factors. These advances were only possible thanks to research.

“This report complements our significant initial research commitment of AUD$750k. We know research works and sooner or later we will find a cure through research,” said Ms. Heraghty.

The report’s key findings were:

A New Day for Sunglasses