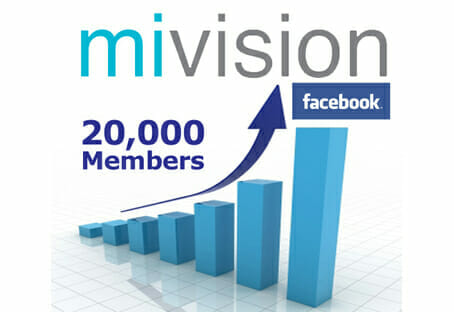 mivision has amassed 20,000 members on its Facebook page in just over two years. In doing so, it has created the largest business to business eye care community on social media in the world.

With a majority of Facebook members signing into mivision’s page from countries in North America and South East Asia, mivision’s Director Todd Tai said the medium has enabled the magazine to communicate important eye care and eyewear stories to the world. Additionally, he said, mivision receives story leads from eye care professionals around the globe, which adds to the depth of the magazine.

In August 2010, mivision appealed to the eye care community via its facebook page to support people in the wake of Pakistan’s worst natural disaster. In response to this appeal, Ifrah Bukhari, an optometrist from Lahore, contacted mivision via its facebook page with a story about the floods that had left more than 16,000 people dead and over 20 million people homeless. mivision published the article in the magazine along with photos sent.

Gina Lednyak the Director – Social Media Strategist at Lednyak & Associates said mivision’s success with Facebook proves that social media can be as effective for business to business (b2b) marketing as it is for consumer marketing.

“Consumer brands do really well with Facebook – people expect consumer brands to have a social media presence. I think mivision has proven how well a B2B company can do when they use Facebook properly. They’ve recognised exactly who the target audience is and created content that is specifically directed at that audience’s interests.”

She said a Facebook presence has to be relevant to the target audience and add value to its audiences’ lives. “When a brand stays true to the idea of adding value to people’s lives, it will always do well.”

Ms. Lednyak said Australia has an enormous number of Facebook users. “In Australia there are 9.7milllon people on Facebook at the moment and 4.5 million of those are over 40 years of age. That’s important because this age group has traditionally been the hardest to reach and communicate with.”

In recognition of the strength of its social media community, mivision was appointed as the global social media sponsor of the 9th General Assembly of The International Agency for the Prevention of Blindness (IAPB) to be held in Hyderabad, India from 17-20 September 2012.