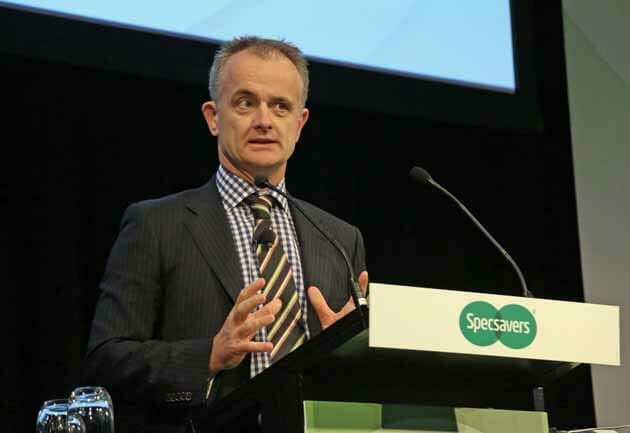 Leading figures from optometry and ophthalmology in Australia and New Zealand presented the latest in research to over 400 delegates at the second Specsavers clinical conference (SSC2), including Optometry Student Society representatives from University of New South Wales, University of Melbourne, Queensland University of Technology, Deakin University and Auckland University.

The speakers talked about the latest findings in the treatment of eye diseases including age related macular degeneration, diabetic retinopathy, glaucoma and acute inflammatory eye disease. Additionally delegates received an overview of common surgical vision correction procedures as well as a summary of vitreoretinal disorders and the associated treatment options.

A presentation by Prof. David Mackey gave an insight into genetic and environmental factors associated with myopia.

Paul Carroll, Specsavers Director of Professional Services in the United Kingdom, spoke to delegates about evolving models for eye care delivery, with specific reference to the experiences of eye care professionals in Scotland and England.

When mivision spoke to Helen Brown, optometrist and owner of the Specsavers Randwick practice in Sydney, she was in the process of writing up notes for her staff, based on the content presented.

“I’ve been to a lot of optometry conferences in the past where the information was too complex and not relevant to daily practice,” she said. “The presentations delivered at the Specsavers’ conference were really relevant to what we do on a daily basis, for example, we heard the latest National Health and Medical Research Council guidelines on diabetes and the most up-to-date information on age related macular degeneration – all really useful information that I can pass on to my staff.”

Ms. Brown said the vibe at the conference was extremely upbeat and positive. “There was music playing and a real buzz in the air. Interestingly, Specsavers owners comprise a lot of younger optometrists and proportionately more men than you would find working in independent practice.”

Specsavers prefaced its conference with a formal dinner at the Sydney Opera House the night before. During the dinner the organisation announced a donation of AUD$500,000 to the Fred Hollows Foundation – the culmination of a three year charity drive that has involved all Australian Specsavers franchises as well as customers. Penny Tribe, Senior Executive – Partnerships at Fred Hollows Foundation was present to receive the donation and said the funds would go a long way towards achieving the not-for-profit’s aim to eliminate avoidable blindness by 2020.

Peter Larsen Director of Professional Services at Specsavers, said the organisation is very proud of its partnership with The Fred Hollows Foundation. “Specsavers recognises the important work the Foundation is doing to end avoidable blindness and is proud to support a charity that was also ranked within the Top 50 best non-government organisations in the world in 2012 (published by The Global Journal).

“The Foundation and Specsavers have similar visions and values and we are proud to work together.”

Mr. Larsen said the cocktail party and Specsavers conference were well received. “Certainly the feedback we had during and after the event has been extremely positive. The addition of the Opera House Welcome Cocktail Party met with universal approval and the CPD program has, I believe, hit the nail on the head in terms of content and practical application. There was so much useful material for optometrists to take back into their consulting rooms,” he said.