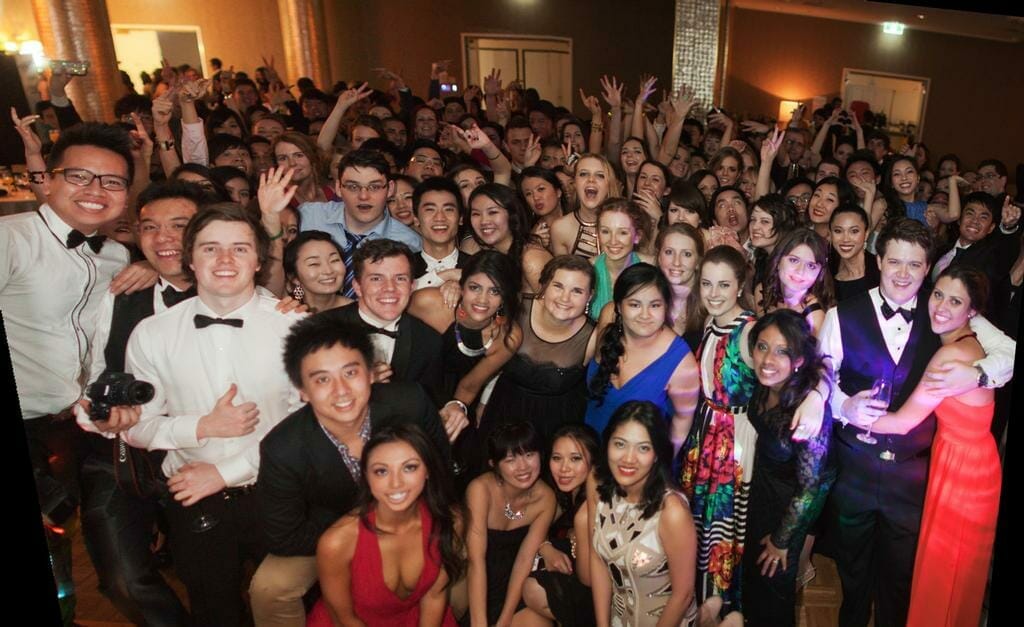 Having been through the trials of an Optometry student, this roving photographer has seen many an Eyeball through recent years – albeit down the barrel of a SLR lens rather than a slit lamp. This year sees him crossing the border north to Queensland, as Saleem Ha wonders how the Brisbane-folk like to party.

Who can resist a night of glamour and fame? As the sun set on the 13th of August, the red carpet was rolled out, and suddenly… students from across the five Years alighted from various vehicles, ascended into Rydges Hotel South Bank, to strut their stuff in this Oscars’ themed Eyeball. Colours were in abundance and simply eye-catching: the ladies showcasing the whole spectrum in long dresses, and the men smartly turned out in black ties or bow ties… well, it WAS a black-tie event, after all!

Having sat (then partied) through six years of student Eyeballs’ from the UNSW Student Optometry Society myself, I have to give these Northerner’s their due credit: they do know how to deliver an opening address! Right from the moment he opened his mouth, to when he finally relinquished the mic, Anthony had the 200-plus guests in various states of amusement punctuated with many peals of laughter. Acknowledgement was paid to the various sponsors (Specsavers, Luxottica, Provision, mivision, etc) that made this evening a delight, along with speeches thanking the Queensland Optometry Student Society executives (Mr. Rohan Hughes and Ms. Allana Neumann) and the Eyeball Committee for the hard work and tireless efforts [and also the never-mentioned behind-the-scenes dilemmas that inevitably arise]!

Optometry students always have their heart in the right place – and the QOSS proved that once again with organising a raffle with the proceeds all generously going to Optometry Giving Sight – a longstanding partner of this publication. The students also did their bit too to snap up those tickets: one could hear a penny drop when the raffle started being drawn, as everyone held their breath hoping one of their tickets would be the lucky one. Then the cheers and laughter came as the prizes were announced: from the practical (iPod Nano) to the pragmatic (one year supply of CooperVision contact lenses); and the easily consumed (bottles of wine) to the lifelong companion – does anyone need another copy of The Wills’ Eye Manual?!

Another trivial favourite graced the stage again this year, with Mr Neville White from Designs For Vision putting on his Quizmaster’s Hat for a rendition of Heads or Tails. My cheeky comment is that there were almost no Optometry questions this year! What happened?! Nevertheless, most of the room were whittled out to the sidelines rather quickly, with a short finale between the last two.

Nibbles were a little on the light side with a two-course meal, but the beef and chicken mains were cooked to a juicy succulent delight that was quickly devoured. Quicker still went the lemon tart – by the time I returned to my seat after roving around the hall for photo-snapping, my table had only one tart left untouched… MINE!

This 48th Eyeball, delivered by the QOSS group from QUT, was simply a success. Movement was constant everywhere – whether you shuffling somewhere on the dance-floor, or tucked away at the Sponsor’s panel for a Year-group photo; but most likely somewhere in the massive line for the mivision-sponsored Photobooth that is now defining a new generation of Eyeballs’. It definitely didn’t hurt knowing the next day was a Public Holiday Wednesday – all restrains were unleashed as the crowd let it rip on the dance floor and at the bar! Shamefacedly, I have to admit these Brisbane folk to know how to party hard – continuing until midnight when things finally wrapped up, with few people remaining in their seats once the formalities were all over (Sydney – we’d better get our act together!!).

This reporter must admit that one is never too old to party, having enjoyed his seventh consecutive student Eyeball. Due compliments are paid to mivision for sending him here, to all Sponsors and QOSS members that made this evening such a memorable delight for all. We also thank Maui Jim for providing a sunglass prize given away on this evening too.