An Association at a Crossroad 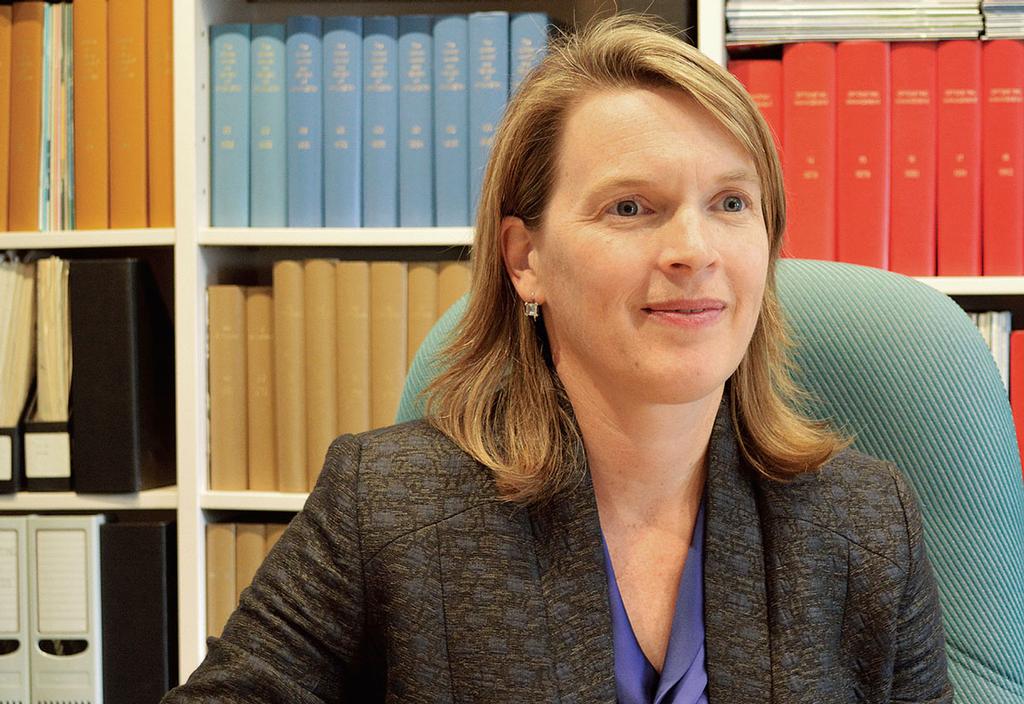 After 100 years, the Optometrists Association Australia is at a cross-road. Now it is taking steps to re-evaluate and promote its offering to members. mivision spoke to Genevieve Quilty, National Chief Executive Officer of OAA, about the Association’s role as the representative of almost 4,300 qualified eye health professionals and the challenges it faces today.

Q: What challenges does the Association face as it endeavours to maintain relevance with its members?

A: Faced with an ageing population and with budgets for health care being squeezed at all levels of government, it is essential that key decision makers at both a National and State level understand the importance and value of the optometry profession to Australia’s productivity and healthy ageing.

We are lobbying hard to try to prevent any adverse changes that could potentially impact on the accessibility and affordability of primary eye health and vision care.

Another challenge is the structural change occurring in the optometry profession.

Optometry is a growth sector in Australia and as it expands we need to work closely with optometrists to help them meet their career goals, while advocating advances in, and protection of, our profession. We need to be agile in understanding the needs of future members as well. The next generations of optometrists will undoubtedly be different from those we represent today. As this generational change occurs, the Association recognises that to remain relevant, we must transform our services and products in line with their needs, career and lifestyle aspirations.

Globally, associations and membership groups are facing similar issues due to the retirement of baby boomers. This has been cited as the number one cause of declining association membership globally. In Australia alone, there are only 4.4m Generation X to replace 5.3m boomers. We also see this as a key contributor to the slight decline in membership.

Q: What impact has the recent move by Specsavers to provide Professional Indemnity Insurance (PII) to their optometrists had on the membership of the OAA?

A: Whilst Specsavers offers some duplicate services, membership to our Association is a personal decision for the optometrist. Has the arrival of Specsavers PII impacted our membership numbers? It may have activated a small decline in some state divisions, but overall we are still tracking strongly with a membership made up of around 90 per cent of all practicing Australian-based optometrists. Our aim is to work collaboratively with Specsavers, along with all other groups who employ optometrists, to ensure that our profession benefits from the work that the Association does.

Q: Why do optometrists need an Association to represent them?

A: You can have individual optometrists all taking time out of their own practices to lobby for change and setting their own standards, or you can have organised optometry – a professional group that is empowered by its members to represent the interests of optometry and that presents a united front.

The Association provides a recognised group for decision makers to talk to. Having an organised group representing the vast majority of the profession makes important discussions easier and more focused.

As an organised, dedicated Association, we also provide the profession with the opportunity to speak for itself rather than through, or by, another profession.

Q: What did Australian optometry look like before the Association was established?

A: In one way, this is a difficult question to answer. A little over 100 years ago professions, politics and health care were all very different. As Australian society grew and evolved, it became extremely important for a professional Association to be established to promote, protect and foster the emerging optometry profession in Australia. Simple matters like an Australian developed course for studying optometry in Australia – that seems second nature today – resulted in the organised efforts by many founding optometrists associated with the Association.

Q: If the Association had not been established, what would the profession have looked like today?

An Australia without OAA would probably result in an optometry sector that was well behind global standards instead of a profession that is one of the best in the world. We might have had to piggy-back off other professions, resulting in poor public and government recognition of optometry as a leading provider of health services in its own right.

Without the Association, eye health checks would not be part of the Medicare system, resulting in patients having to pay for such checks. The result? A sector that is not as healthy as it is today because growth in patient numbers would unlikely be large enough to support robust sector growth.

The ramifications of this alone present some very interesting scenarios. For instance, it is likely that we would not have five top universities offering optometry courses, forcing budding optometrists to study offshore. Our nation’s cutting-edge repository of optometry skills and clinical knowledge would subsequently be depleted. In turn, the regulatory checks and balances would not be in place to ensure Australians can benefit significantly from safe, sensible increases in optometry’s scope of practice.

Q: What role has the Association played in setting education standards for optometry?

We also facilitate the profession’s continued advancement in education – it was a handful of optometrists who developed and organised for therapeutic training to commence many decades ago. The Association has led the Continuing Professional Development program and we provide our members with news and case studies of clinical advances to ensure they are kept up to date.

As a collective, we continue to seek the best possible public health settings to ensure affordable accessible primary eye health and vision care.

Q: What other day-to-day services do you provide for members?

A: Aside from the key role of advocacy, over the years the Association has provided a wide range of services and programs to support practising optometrists in Australia. These include Professional Indemnity Insurance; opportunities to contribute to special interest groups such as Rural Optometry, Aboriginal and Torres Strait Islander eye care, and Low Vision working groups to share knowledge and develop clinical guidelines. Additionally, we provide our members with marketing support.

A: This year, we will continue to deliver personalised confidential clinical and practice assistance to members as well as providing support in key areas of compliance such as Medicare, national registration and medico-legal matters. We remain committed to our program of providing a top quality, OBA-compliant professional indemnity insurance policy, which remains supported by the largest network of medico-legal advisers in Australia.

We are reviewing our member engagement activities to ensure we are aligned to their expectations and concurrently, we will dedicate significant effort to raising the profile of the optometry profession among the community health care sector as well as with consumers. We will further focus on key issues such as low vision, indigenous eye care and rural optometry, while providing quality CPD, conferences and networking programs.

As alluded earlier, we will remain active at the decision making table to ensure that the optometry sector is not impacted due to budgetary, regulatory or policy changes.

In 2014, the Association will continue to refine the delivery of Association programs and services through our new member-facing website – www.optometrists.asn.au. We launched the site in late 2013 as a new digital platform focused on providing easy to access and relevant member resources while also supporting critical eye health information targeted at consumers. Our engagement with members through a range of leading online and print publications providing up-to-date and relevant industry information will continue, as will our social media programs including Twitter and Facebook.

For over 100 years, the Optometrists Association Australia has played a pivotal role in advocating and lobbying for major changes on behalf of the profession. Carefully planned strategies and strong evidence based arguments with key decision makers have resulted in the achievement of key public policy and regulatory changes.

The battle to secure the importance of optometry as a profession began even before the establishment of the OAA.

The first optometry act in Australia was passed in Tasmania in 1913 – a testament to the hard work of a group of optometrists who decided not only to collaborate to advance the profession but more importantly, to protect patients, thereby ensuring that only qualified optometrists could provide optometric services. This motivated other jurisdictions to follow suit.

The Association began its push for government funding in the 1960s and was eventually successful in 1974. At the time, optometry was the only non-medical profession admitted to Medicare. This also led to optometrists being able to give direct referral rights to ophthalmologists.

In August 1993, when the government removed optometry from Medicare in an effort to seek budget savings, the Association engaged in a fierce battle with the then government, which resulted in the successful reversal of this decision.

The Association continues to focus on Medicare and for the past 18 months we have been lobbying all sides of parliament to have the fee cap removed to allow optometrists to set their own fees, in the same manner all other health practitioners are able who work under Medicare.

Prior to this, optometry courses did always cover disease related aspects of ocular management and the post graduate courses provided an increase in the theoretical and clinical training required to achieve eligibility for endorsement of registration.

Now all registered optometrists with scheduled-medicine endorsement are able to prescribe Schedule 4 (S4) drugs for the treatment of ocular disease and every undergraduate (or pre professional) optometry qualifies an optometrist to prescribe relevant topical S4 drugs.

The Association secured PBS rights in 2008 and continues to seek appropriate adjustments to the PBS on behalf of eligible patients to assure fair and equal access to eligible medications by patients requiring access to subsidised medications.

The Association pursued this issue so that patients requiring a prescription for ophthalmic drugs would not be economically penalised for seeing an optometrist rather than a GP.

The listing of relevant ophthalmic medications for PBS eligibility when prescribed by optometrists also makes the best use of available health resources, including the health workforce.

State and territory laws were modified to be generally subsumed in the National Registration and Accreditation Scheme (with the exception of South Australia and Tasmania which have supplemented national registration laws with additional optometry specific legislation).

The Association and key members have worked tirelessly to ensure there is an adequate safety net for patients who are unable to afford spectacles. Key achievements have been the development of low cost spectacle schemes and the DVA spectacle scheme, and for those patients not located close to a permanent optometrist, the Visiting Optometrists Scheme.

In 2010 the Association successfully lobbied for the inclusion of optometry as one of 10 health professions within the National Registration and Accreditation Scheme, with a guaranteed legislated protection of the practice. It was not a foregone conclusion that the restriction on optical prescriptions directly translated to the new uniform National Law. This sensible restriction continues to exist because of the Association’s advocacy work in every jurisdiction leading up to the passage of the NRAS legislation.

The OAA supports the move by the Optometry Board of Australia to achieve regulatory changes with respect to glaucoma medication prescribing. This has been a controversial decision and one the OAA continues to advocate for on behalf of optometrists, in an effort to ensure the public has greater access to quality eye
care in the future.