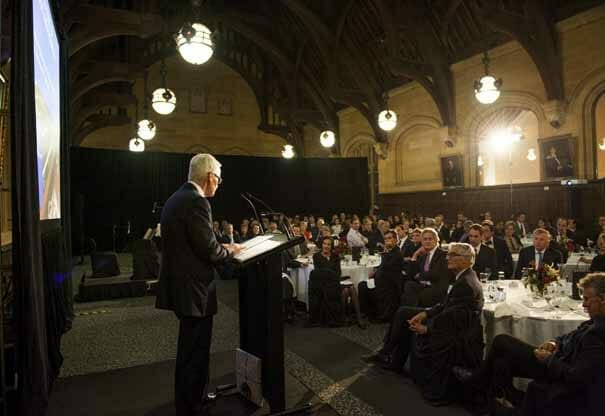 The Discipline of Ophthalmology 50th Anniversary Gala Dinner was held in October at the University’s MacLaurin Hall, and hosted by Associate Professor John Grigg, who heads the Discipline.

A/Prof Grigg welcomed guests, saying “With its distinguished history and its exciting future, the Discipline of Clinical Ophthalmology is something I am very proud to be associated with. This is because of the remarkable teachers, researchers, clinicians and students who have made the profession what it is today. Together, we have played an integral role in caring for people with eye disease, and have had major and positive impacts on the lives of many individuals and families.”

Through its postgraduate Masters program, the Discipline of Ophthalmology and Eye Health at the University of Sydney provides foundation science education to 70 per cent of training ophthalmologists in Australia.
The Discipline, established in 1964 by Dr. Frank Claffy and Dr. Eddie Donaldson, integrates clinical care with excellence in teaching and research programs through the collaboration of the Save Sight institute at the Sydney Eye Hospital, the Centre for Vision Research at the Westmead Millenium Institute, and eight University schools.

In an open letter of congratulations, the Hon. Jillian Skinner MP wrote, “The foresight of Dr. Frank Claffy and Dr. Eddie Donaldson to link the education of students with patient care has been invaluable and undoubtedly it has played a vital role in advancement of eye care here in NSW and across the country.

“Research, too, has been an important part of the Discipline’s work, which has led to the pursuit of new models of care, as well as new ways of learning and teaching to better prepare the next generation of ophthalmologists to further improve patient outcomes.”

Indeed, the Discipline’s recent achievements are impressive. In 2010 and 2012, it was awarded the highest possible score by the Excellence in Research Australia’s national report. Among research projects undertaken are the Blue Mountains Eye Study, the first large Australian population-based study of age-related eye disease. Retinal stem cell trials commenced enrolment in 2014. In 2013 alone the Discipline was awarded AU$7 million in competitive grant funding and reported its highest ever student cohort.Recently the Masters in Ophthalmic Science program was expanded to include courses in ‘International Ophthalmology’ and ‘Cataract and Refractive Surgery’.

Celebrating Past and Present

The evening celebrated these successes and all who have contributed to the Discipline over its 50-year history. In an open address, a past head of the Discipline of the College of Ophthalmology, Professor Frank Billson AO wrote, “Leadership stands on the shoulders of those who went before, but success depends on providing opportunity and support for the next generation”.

“The celebration tonight is dependent upon all who have worked and shared the dream for the future of ophthalmology, to staff at all levels, including those many colleagues and community members who are un-named, whose influence will continue long after we are forgotten.”