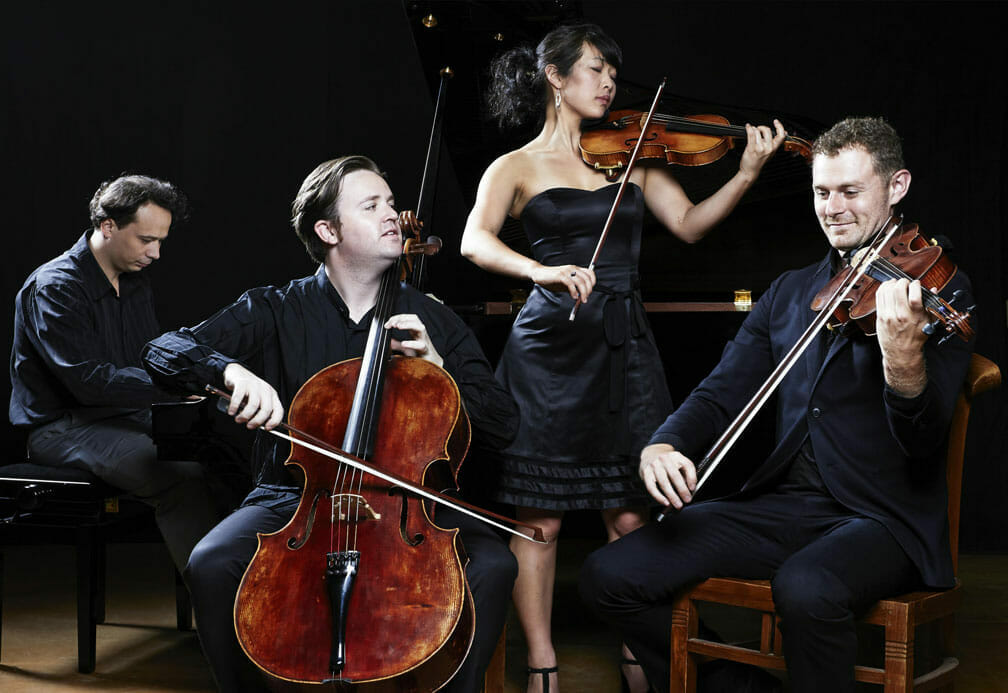 The benefits associated with playing a musical instrument are many and varied. They are often emphasised by schools and music teachers eager to engage students … improved organisational skills, perseverance, memory, mathematical ability, reading, comprehension, coordination, concentration… the list goes on.

For Dr. Andrew Anderson, playing an instrument and composing music has always been purely about pleasure. “If I strip it back, the thing I love about music, is it is inherently enjoyable. We often talk about music being useful – it’s sold to parents as being helpful for a child’s development – but I believe music is of itself interesting and engaging… it doesn’t need any other purpose. It should be enjoyed for itself – for playing, listening and writing.”

Dr. Anderson’s interest in music began at a young age. “I began learning the violin in primary school and two years later I took up piano as well.

“At the time I didn’t question learning an instrument – my three sisters before me had all taken piano lessons and so it was natural that I did too. In my teens I started composing and more recently I have taken professional singing lessons.”

I didn’t start out to do this, it was just a natural progression…

He said a supportive peer group encouraged his continued interest. “My school was very supportive and I was part of a core group of people who valued music and who were academic. While it was unusual to be composing as a teenager, I had active competition from another student in my peer group, which pushed me on… within our group excelling wasn’t something to hide.”

And excel he did – but not solely in music. Graduating from optometry at the University of Melbourne in 1993; he achieved his Masters of Science in 1997 then a Doctor of Philosophy in 2000. He spent two-and-a-half years at Devers Eye Institute in Portland Oregon researching behavioural testing and glaucoma before moving to the United Kingdom where he undertook post doctorate studies on eye movement under Professor Roger Carpenter at the University of Cambridge Department of Physiology. In 2005 Dr. Anderson received an academic appointment at the University of Melbourne’s Department of Optometry and Vision Sciences, and in 2008 he was appointed a senior lecturer. Since then he has received several government grants, and most recently was awarded a four-year Future Fellowship from the Australian Research Council which has him in a ‘research only’ position working on a study entitled ‘Understanding progressive vision loss in the eye disease glaucoma’.

It’s an extraordinary academic trajectory and even more so when you consider that running in parallel is an equally impressive musical career. In the past four years, Dr. Anderson has received four commissions for works and has had his classical pieces performed publically by professional musicians on almost 20 occasions. Yet he is self-effacing. “I didn’t start out to do this, it was just a natural progression – you know, you achieve one thing and move on to the next,” he says.

Dr. Anderson says he particularly enjoys the creative approach required to problem solve across both music and scientific research.

“There are a lot of parallels between research and composing music. Research is highly creative – thinking up new ways to investigate things, to present the data; ways to write a cohesive compelling argument supported by that data that can be delivered to a journal. You struggle with something then you get that moment of satisfaction when it comes together really well.

“So while it’s a little different from composing, it is still a creative process.”

He said the constraints that apply to writing a research article also apply to composing music, and they make the process more fun, more challenging and rewarding.

“Whether writing a journalistic piece, a scientific article, or composing music there will always be a range of constraints – and part of the enjoyment is trying to write within those. So, for example, when you are commissioned to compose a piece of music, the limits will be the event the piece is to be written for, the ensemble who will perform it, the duration etc.

“Even if I’m not writing for a commission, I think about the likely performance opportunities – there’s no point writing for an opera that’s never going to be performed… I don’t want to produce thousands of pieces that sit in a draw – music is something you like to share with other people – both with performing musicians and audience members.”

Dr. Anderson said most of his commissions come from word of mouth and all of the music he composes is written after hours. “You work with one ensemble or a particular person and they introduce you to another; sometimes you have to make cold calls to introduce yourself, to ask ‘would you be interested in this work?’… but most of the performances I’ve been doing in recent years is a result of networking.”

Finding time to compose outside his academic research, he says can be challenging. It just comes down

to priorities. “I don’t have too much time for other interests – but I’m not trying to raise a family so that makes a big difference – that frees up significant after hours time.

“So it’s a matter of working out priorities… there are some things I’m not particularly interested in, there are other things I’d quite like to do, but can’t find too much time for, and then there is a smaller group of things I really want to do – and those are the things I just have to make time for.”