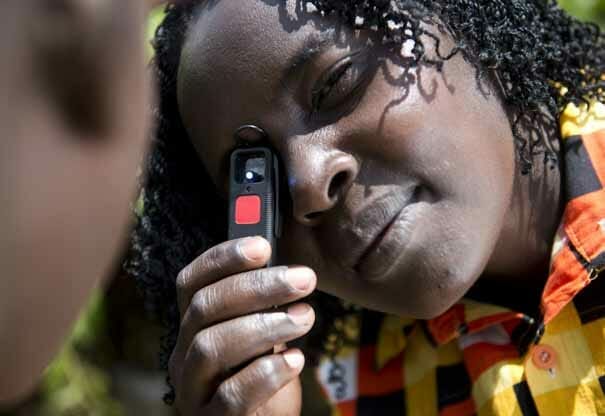 mivision frequently reports on eye health professionals and companies selflessly donating their time, expertise, equipment or product to help those in disadvantaged communities who are needlessly suffering vision loss. But, what if you just can’t travel to a remote community to help?

When you talk to ophthalmologists or optometrists returning from eye health missions from far-flung parts of the globe, almost without exception, they speak of that moment of reveal.

It is that moment of wonder when the bandages are taken off after cataract surgery – or a patient is fitted with a pair of prescription spectacles for the first time – and their world has changed forever. They can see. By all accounts, that moment

is life transforming – for the patient obviously, and also for the eye health professional who has volunteered their time and expertise.

We have all considered or even romanticised about volunteering in Africa… However, the realities of a busy practice and family life continually intervene…

But not everyone is in the position to take weeks – sometimes months – out of their schedule to volunteer for eye health missions. What then? Virtual volunteering, perhaps?

Twice The Doctor is a not for profit charity and medical volunteer program, established earlier this year, that allows Australian doctors to virtually-volunteer in international relief efforts in some of the poorest regions of the world.

Established in May this year (2014), one of the first partnerships has been struck with The Fred Hollows Foundation (FHF), to train local eye surgeons and eye health workers in Kenya.

Twice the Doctor Director Dr. Jill Forer said the concept of Twice the Doctor was based on a recognition of the disparity between the cost of medical services in developed and developing nations.

Dr. Forer said the vast majority of health professionals had a “fundamental drive” to help people – and not just those fortunate enough to be able to access health care.

“We have all considered or even romanticised about volunteering in Africa or in a similar developing world situation. However, the realities of a busy practice and family life continually intervene, so that only a very small minority of us ever actually make the journey,” she said.

“Doctors can now virtually donate a day of their earnings (approx. 0.5 per cent of their annual salary), to fund a colleague in Kenya for a month, or a nurse for six months. A doctor in Africa gets about AU$12,000 per year and a nurse about AU$2,000 annually.”

The concept is one that is already familiar to the eye health profession, with fundraisers such as World Sight Day already modeled on the similar idea of donating a day’s practice earnings.

Ophthalmologist Dr. Brian Harrisberg, who has a private practice in the Sydney suburb of Newtown and also holds positions at the Royal Prince Alfred Hospital and Sydney University, said the charity recognised volunteering comes in many forms, “including visits to outback communities and delivering first class surgical procedures in areas where there may be no chance of health delivery”.

“This is not to say that eye health professionals don’t need to go to the frontier of rural third world health, but rather gives opportunities to those doctors, who don’t volunteer, to achieve just as an effective means of giving back to world health whilst they work within their own communities,” Dr. Harrisberg said.

Twice the Doctor Foundation donated AU$25,000 to The Fred Hollows Foundation this year, and aims to increase that substantially in the future.

The FHF has been working in Kenya since 2004, with a focus on cataract and trachoma – the two leading causes of avoidable blindness in the country. The Foundation is working with Kenyan public hospitals to undertake surgeries and train specialist health workers to provide eye health services in rural and remote areas. Kenya country manager Jane Ohuma says the Foundation’s pilot outreach model, combining both trachoma and cataract surgery, has been a great success. “The strategy ensures that all patients who are needlessly blind can receive treatment under one roof – increasing efficiency and increasing the community uptake of eye health service,” Jane Ohuma said.

With a ratio of two ophthalmologists for every one-million people, the national health system does not yet have the capacity to reach the nation’s most vulnerable people. It is estimated that seven million people in Kenya – or approximately one-sixth of the population – are at risk of trachoma.

Trachoma is an infectious disease most commonly found in poor, remote communities where people lack access to clean water and sanitisation. The disease mainly affects women and children and is one of the more painful ways to go blind.

Additionally, Ms. Ohuma said that in Kenya, as in the rest of Sub Saharan Africa, the limited eye health workforce is one of the key challenges in achieving VISION 2020 targets in Kenya. “The eye health workforce is not growing quickly enough to achieve global eye health targets by 2020,” she said. “Substantially more targeted investment in human resources for eye health is needed. We need to prioritise investment in training new cataract surgeons and improving surgical output efficiency.”

The FHF has now supported 18 combined trachoma and cataract camps, performing more than 2,300 eyelid surgeries and more than 600 cataract surgeries since 2012.